How does that work? Lateral flow tests

Millions of people each week are taking lateral flow tests to detect COVID-19, enabling them to get a result in just 30 minutes. 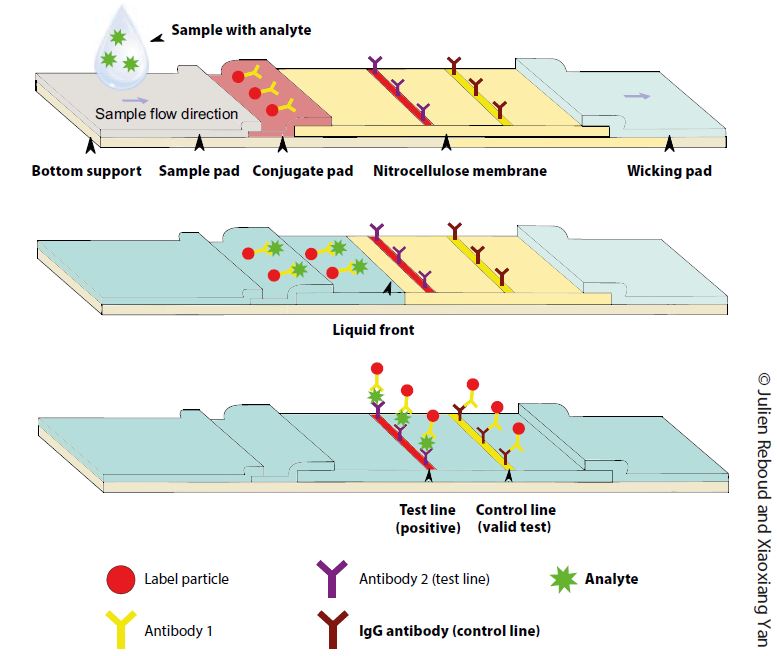 Most medical diagnostic tests are about finding a needle in a haystack. With infectious diseases, even just a few pathogens in our bodies can wreak significant havoc, and these are very small – viruses can be around 1,000 times smaller than the width of a hair. To find them and understand the cause of an illness, one must capture only the pathogens, remove everything else and reveal their presence. In the analogy of the haystack: blow all the hay away so that only the needle remains and it shines in the sunlight.

In some cases, this analysis can be done using lateral flow tests, which can perform all three steps – capture, purification and detection – in a few minutes, using just a strip of paper held in the hand.

The format is based on two main phenomena and is used widely in medicine. The first phenomenon is fluid transport through the paper’s porous matrix, also known as wicking. As spilt water expands on a paper towel used to mop it up, a liquid sample, such as blood or saliva, can also flow in a strip of paper. The paper ‘pumps’ the flow, always in the same direction, wetting the dry parts in front of it. By placing components in succession on the paper, they will encounter the sample, and the pathogens it potentially contains, one after the other in a controlled sequence.

The lateral flow strip is not actually a single piece of paper but a sequential arrangement of carefully engineered porous materials, called pads, each with a specific function. The first pad receives the sample and can have different pore sizes. For example, blood contains many cells, which often create disruptions in the flow as the sample moves through the strip. This sample pad can comprise of pores that are smaller than the cells, enabling the pathogens to pass through but retaining the cells like a filter. The flow through the rest of the pads is finely tuned using the size and surface properties of the fibres, which are often made of nitrocellulose. Fibres with a hydrophilic surface and relatively large pores between them allow the sample to flow faster than if the pores are smaller with more densely packed fibres. The manufacturer can control the test’s duration and the time that the necessary biochemical reactions take on the strip. The final absorbent pad acts like a sponge to receive the sample. The more liquid it can hold, the more sample the strip can process.

The second phenomenon captures the pathogens by specifically binding different molecules together. The technology often reuses a natural immunity defence mechanism in living organisms, based on the binding of antibodies to intruders. These molecules latch onto the intruders in a tight lock-and-key fashion: the key (the antibody) only binds to one lock (the pathogen) and nothing else in the biological sample. By placing an antibody on the paper, it can capture the pathogens as they pass, transported by the liquid flow from the wicking. The flow then continues to wet the paper.

A second antibody carrying a coloured bead reveals the pathogen’s presence: as it binds to the pathogen, now stuck in a particular place on the paper, beads collect in a line, which becomes visible to the naked eye. There are many more beads than pathogens, so unbound beads carry on, moving to a second location where a different particle captures them and creates a second line. The second, control line simply attests that the test has functioned properly. Two lines indicate the pathogen’s presence. If there is only one line, the test has worked and there was no pathogen.

Analysis on such a simple, low-cost strip of paper can provide important information outside of hospitals, at home, in the GP’s office, or in resource-limited settings such as low- and middle-income countries. The fast response time also enables quick informed decisions about treatment, increasing the chances of overcoming the disease.

Dr Julien Reboud is a senior lecturer in biomedical engineering at the University of Glasgow. He helps engineer new medical diagnostic devices for use in low-resource settings in Africa.

How I got here - Josh Oldham

Manufacturing degree apprentice Josh talks about his interest in engineering, working at Aston Martin and studying applied engineering at WMG, University of Warwick.

Half of plastic packaging is used once and thrown away. Startup Notpla has developed sustainably sourced seaweed packaging to hold liquids