An innovative construction technique has been used to create a ‘dive-under’ tunnel beneath the East Coast Main Line railway, creating the world’s longest single underground jacked structure, and the first ever in the UK to be jacked round a curve. Hugh Ferguson spoke to John Agar and Pieter Esbach, Engineering Manager and Project Director for Morgan Sindall Infrastructure, and Andy Robinson, Director of UK company Jacked Structures. 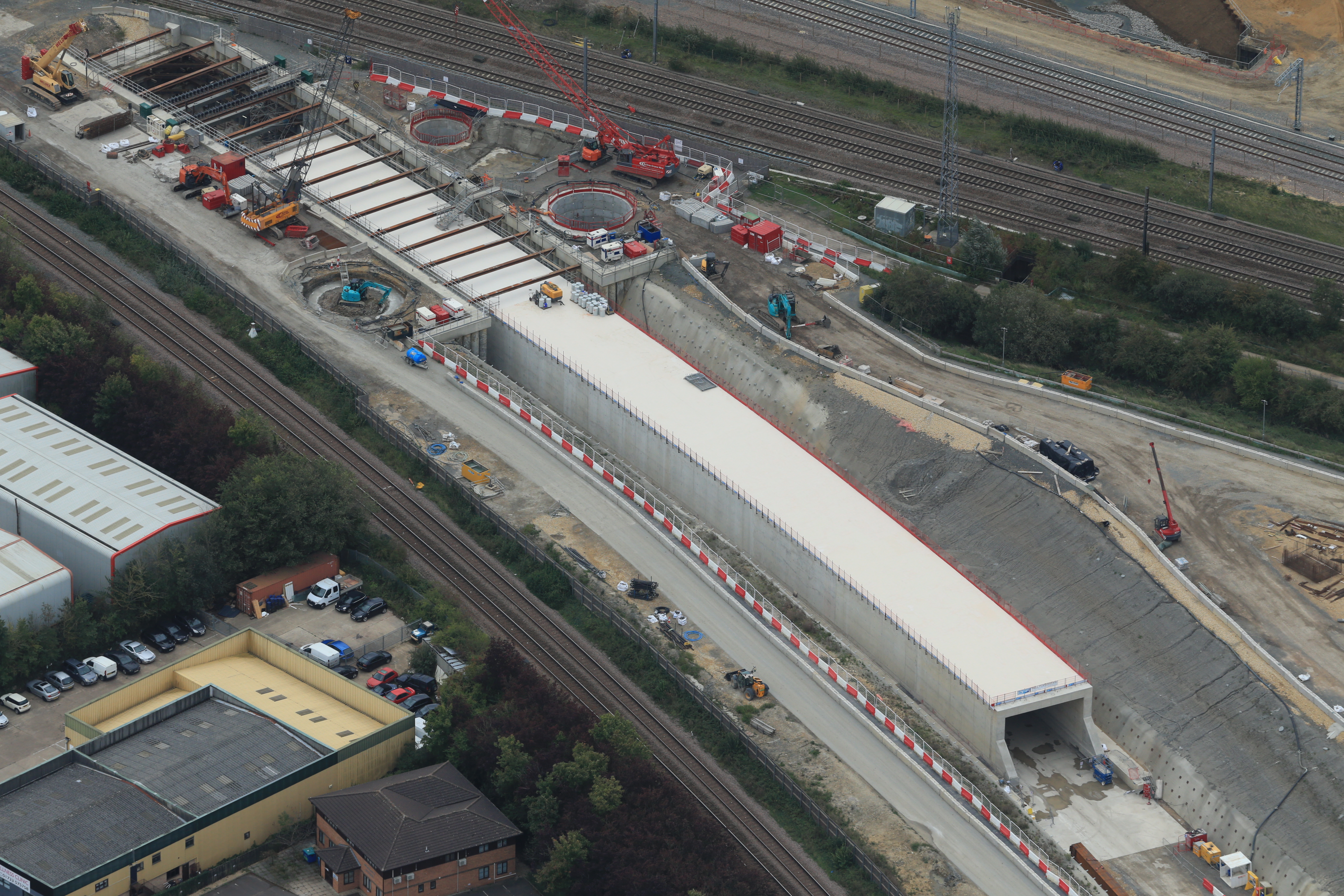 The 155 m-long concrete portal almost complete, before the start of jacking

Jacked box tunnels are nothing new, as a method of creating an opening beneath a busy road or railway with minimal disturbance. A jacked structure is constructed, normally in reinforced concrete and usually rectangular in shape, adjacent to where it will be located, and then thrust forward horizontally into place using high-capacity hydraulic jacks, while the ground is excavated in front. This allows the road or railway to continue operating overhead or during a very short closure. This method becomes impractical for large or long tunnels since the friction forces become too much for the jacks, and jacking around curves creates an extra order of complexity.

The challenge at Werrington near Peterborough was to replace a flat crossing by diverting a freight line beneath the East Coast Main Line (ECML) at a very acute angle [see ‘Why a dive-under at Werrington?’]. The Werrington Grade Separation project is part of Network Rail’s £1.2 billion upgrade of the ECML and is being built by Morgan Sindall Infrastructure under a design-and-construct contract, with Mott Macdonald as design partner. Tony Gee & Partners is sub-consultant for the jacked tunnel elements, with additional advice from UK company Jacked Structures, whose founder James Thomson is patent holder for the system adopted.

The team decided on a system that involved replacing the conventional box section of the jacked tunnel with a portal – just the two side walls and the roof – and leaving the floor to be cast in situ once the jack was complete. This reduced the weight of the structure and, more importantly, removed the primary source of friction during the slide: between the base of the box and the ground. 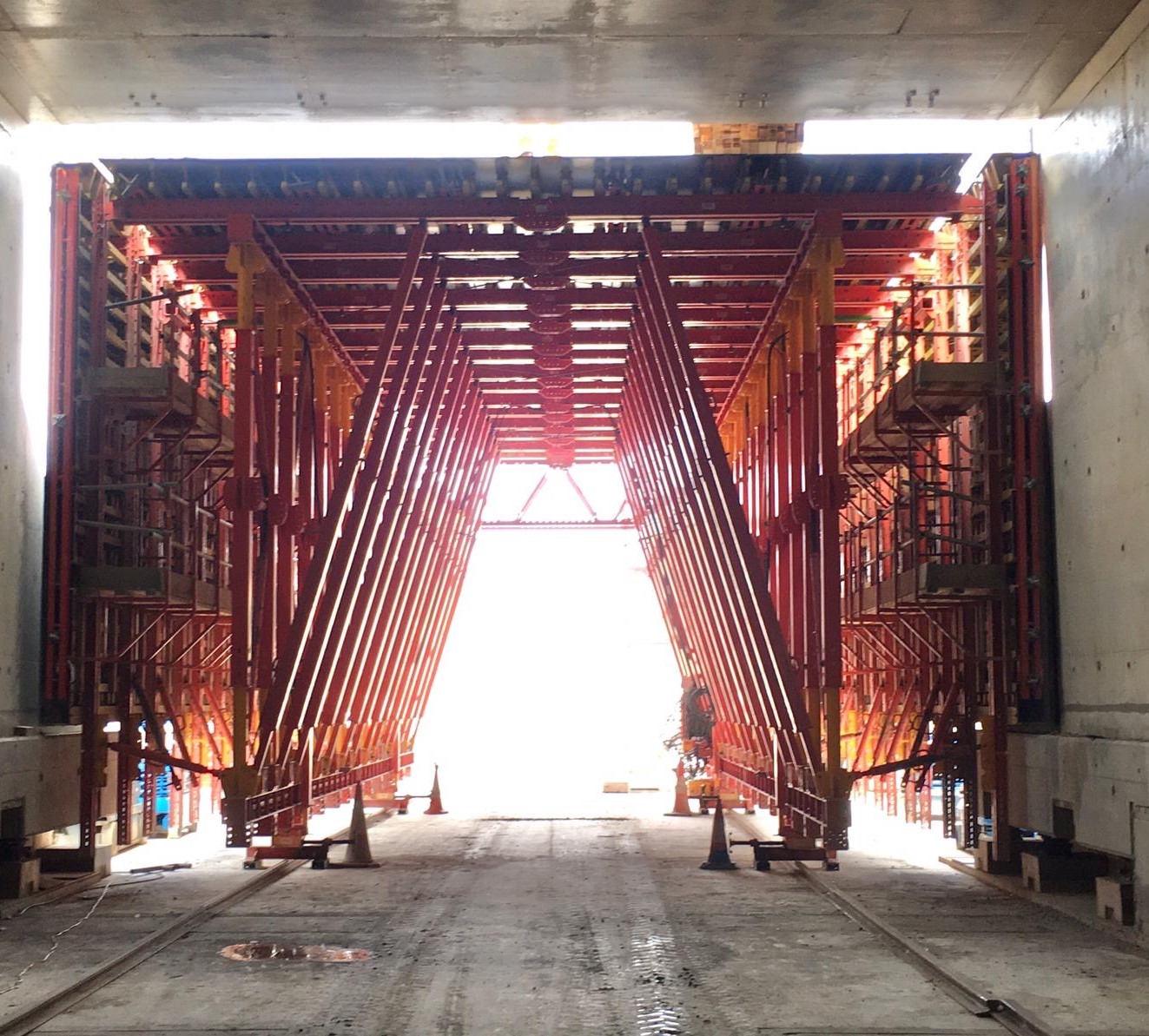 Travelling formwork for constructing the 11,000 t 155 m-long concrete portal before it was jacked into place
© eb7 Immersive

This could only be done if there was a firm foundation for the walls of the portal to slide on. Engineers at Morgan Sindall Infrastructure achieved this by first driving two small-diameter tunnels under the railway, precisely on the alignment of the portal foundations. These were then half-filled with reinforced concrete to provide a smooth surface for the portal to slide on, with side walls cast in to help guide the portal round the bend, and they then later act as permanent foundations for the structure.

The chosen layout required a 155 m-long tunnel, 9.5 m wide and 5.1 m high with 1 m-thick walls, on a curve of 750 m constant radius. Preparatory works included diverting a river and various services, relocating some of the existing freight track to make space for the new works, and excavating the approach ramps.

Last August, engineers used an earth pressure balance tunnel boring machine to drive the two curved guide tunnels. This type of machine is used in soft ground, and uses the excavated earth to support the tunnel face as it is excavated. Each of the 3.5 m diameter guide tunnels were lined with ‘permanent’ concrete segments to ensure no settlement of the ECML overhead before the main structure was jacked. Cages of reinforcing bar were inserted inside the tunnels, and the guide path was concreted in.

The giant concrete portal – weighing more than the Eiffel Tower at 11,000 t – was constructed on the eastern approach, over a reaction slab that included 34 rows of sunken ‘pockets’ as well as slide path beams on each side linking to those in the guide tunnels. The reaction slab provided a foundation to construct the portal. Cast pockets in the reaction slab accommodated relocatable reaction frames for the jacks to push against. At the rear of the portal, large moveable steel reaction frames were lowered to engage in the pockets and provide something for the jacks to push against, for each stage of the push: every 5.4 m the reaction frames were lifted and relocated in the next pocket. The four large jacks together had a capacity of 5000 t, bearing on a thrust slab – a short 10 m-long section of the eventual tunnel floor between the feet of the portal.

Two stills from an animation used in training for the construction team before the jack. A: The rear of the portal, with four 1250t jacks slung from the portal roof and attached to a thrust slab spanning between the portal feet at the rear of the structure. The jacks pushed against movable steel reaction frames (foreground) engaged in pockets in the foundation slab beneath. B: The front of the portal during the shove, showing excavators at work and the top of the linings for the right-hand guide tunnel being removed to reveal the slide path with its PTFE pads, on which the steel skidding beams run

The jacking itself was originally targeted for a track possession in September 2020, but the first COVID-19 lockdown put paid to an already very tight programme. Network Rail had a full complement of works for December, and instead provided a nine-day track possession in January 2021– although a skeleton Main Line service was maintained throughout, by diverting passenger trains to one of the realigned freight tracks.

In December, a short 13.5 m trial push was successfully completed, to test the jacking system before the portal reached the ECML. From soon after midnight on 16 January, the ECML track over the tunnel was lifted together with ballast and topsoil to expose the stiff clay beneath. Then the jacking could commence, with the clay removed by hydraulic excavators operating both within the front of the box and from the surface above. Cutters were fixed to the front walls of the portal, to trim the cut to just 50 mm outside the portal walls.

As the drive progressed, the top sections of the guide tunnels’ segmental linings were removed to open up the new guide track. Low-friction PTFE (commonly known as Teflon) pads were fixed to the guide track at regular intervals to provide a smooth-running surface: the portal ran over the pads on a series of 28 steel skidding beams, each attached to the underside of the portal walls and activated by two lift jacks.

Getting round the bend was an additional challenge, as this had only been attempted once before (in The Netherlands) and that was for a much smaller tunnel. The ‘steering’ came from a hydraulically linked lateral guidance system: a series of 40 jacks located in slots in the bottom of the portal walls maintaining sideways pressure on the sides of the guide paths.

Resistance to the thrust was expected to have three components: friction of the portal walls’ skidding beams running on the slide paths with their PTFE pads; front loads from the cutting edges of the portal walls pushing against the soil ahead; and side friction as the unsupported soil slumped against the walls. The resistance was expected to increase as the tunnel progressed. As it turned out, the front load during jacking was less than expected, and there was no side friction at all: the excavators and side cutters were able to trim the ground accurately, and the unsupported vertical sides of the clay held up well, leaving just a 50 mm-wide gap. The peak thrust required was only 900 t, and two of the four jacks proved redundant.

Steering too went like clockwork. A constant pressure was exerted by the lateral jacks on each side, and this proved sufficient to steer the structure round the bend with very little adjustment.

The only difficulty came with the PTFE pads, which occasionally buckled and needed to be replaced more frequently than expected, causing minor delays. Even so, working 24 hours a day in three shifts, the jack was completed, the portal lowered on to its permanent foundations, the 50 mm gap between the wall and the clay was backfilled with pea gravel and then grouted from inside with cementitious grout through holes in the walls to minimise any future settlement, and the ballast and track re-laid overhead – all comfortably within the nine-day window. The track was handed back to Network Rail with 52 minutes to spare.

With plenty of finishing work to complete, the first freight trains are expected to use the new tunnel in November. Avoiding the delay of crossing freight trains will allow the frequency of ECML high-speed services to be increased from six to eight per hour, but passengers will not see this benefit until May 2022 when the new timetable is introduced – by which time passenger numbers on long-distance high-speed trains may well have risen back to pre-COVID-19 numbers.

The £240 million Werrington Grade Separation project is part of Network Rail’s much larger ECML upgrade, a large part of which is renewing track, signalling and overhead line equipment at London’s King’s Cross station and its approaches.

John Agar was key in supporting and helping to develop and lead the design solution developed for the Werrington Grade Separation project. An experienced engineer, John has worked within the industry for several years.

Pieter Esbach has a wealth of experience in leading and delivering complex multi-million pound civil engineering schemes. Committed to driving innovation and working collaboratively, Pieter played an integral role in leading the safe delivery of the Werrington Grade Separation project.

Andy Robinson is a specialist tunnelling engineer with over 30 years’ practical, design and management experience in jacked installations on the worldwide stage.

Nuclear designs on a low-carbon future

Find out how small modular reactors will contribute to achieving net zero.

Half of plastic packaging is used once and thrown away. Startup Notpla has developed sustainably sourced seaweed packaging to hold liquids