Did you know?
• Buildings are responsible for more than a quarter of greenhouse gas emissions
• Built in the 1990s, One Triton Square has been renovated and transformed, reusing many of its original materials
• A team of architects, engineers and other building professionals all brought their varying expertise to the project
•The project saved 54% of carbon dioxide emissions, reduced water use by 65% reduction and responsibly sourced 80% of its materials

Demolishing old buildings and replacing them with new ones is a major source of carbon emissions. However, with some imagination and engineering ingenuity it is often possible to transform and reuse buildings that have passed their useful life. At One Triton Square in London, this resulted in carbon savings of 55% compared with a conventional rebuild – while saving money for the client and without compromising quality. Hugh Ferguson explored the roots of this success and how lessons can be exploited on other buildings. 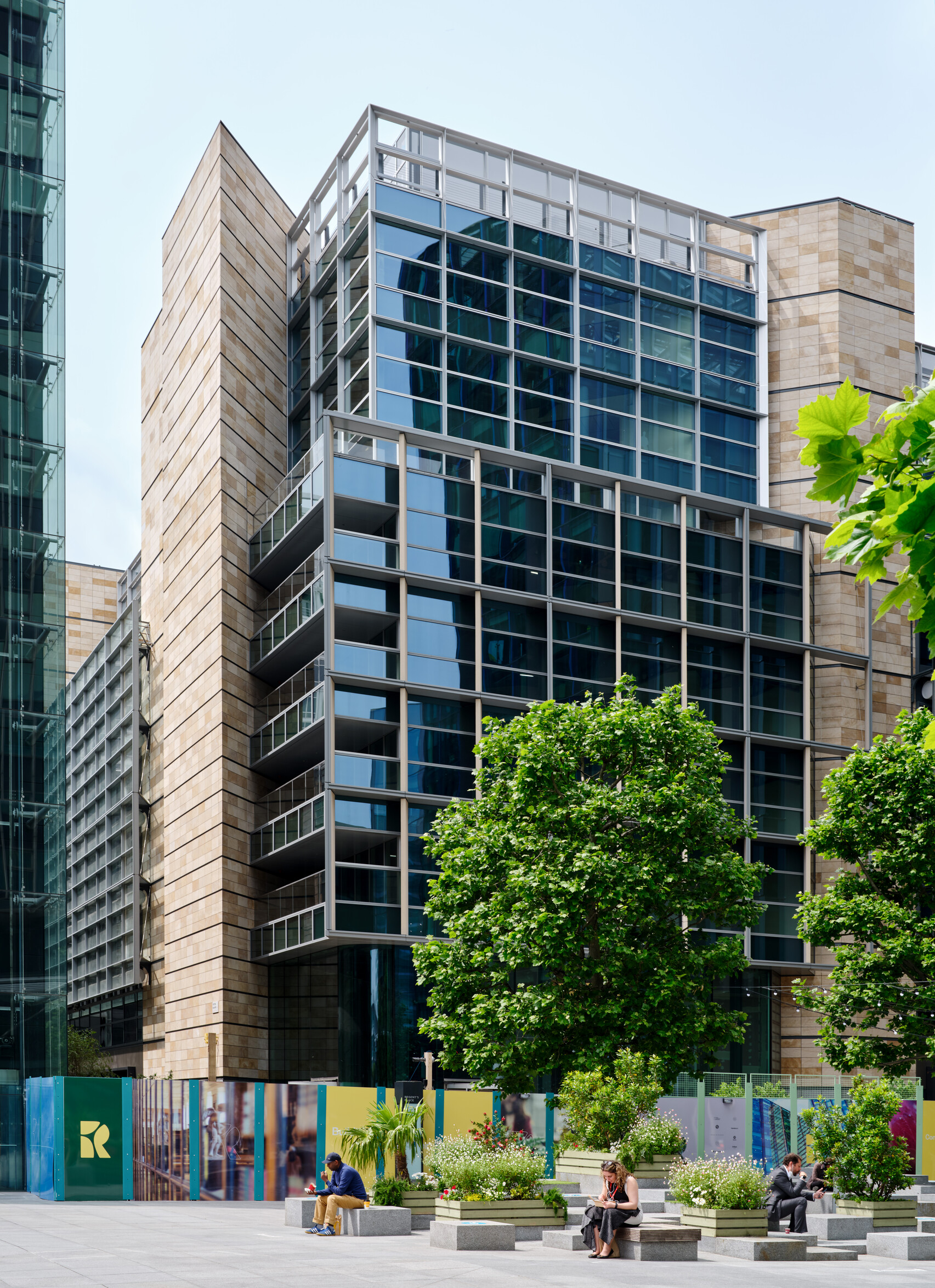 Buildings are responsible for 38% of global greenhouse gas emissions [see image below]. This breaks down into 10% related to the materials and processes used in construction – predominantly cement production (6%) and steel in construction (4%), and 11% for gas and electricity used in operating non-residential buildings, (while the remaining 17% is for gas and electricity in residential buildings).

This presents a major challenge in building and construction: how to reduce the enormous amounts of embodied carbon in construction materials, and how to make buildings more carbon efficient in operation – without imposing impossibly large additional costs.

One Triton Square in London was a square 1990s office block with six storeys above ground and one basement level. Its structure was predominantly concrete framed with some steel, and its most remarkable feature was a huge central covered atrium from the first floor upwards. It was tired and unlettable, and ripe for redevelopment. Indeed, the local planners were initially bemused that the owner and developer should be considering anything other than demolition and rebuild.

Property company British Land had other ideas. It brought in Arup Associates as designers and contractor LendLease. Together, they committed to a ‘circular economy’ philosophy: where possible discarding the conventional ‘linear economy’ approach of ‘take, make, use, dispose, pollute’ with a cycle of ‘make, use, reuse, remake, recycle, make …’. This approach aims to keep assets at their highest possible value for as long as possible, even as staff and processes change, and impacts planning, business, design, and materials. It requires teamwork from people aligned to a common objective, since the solutions require imagination, common decisions and common actions from all parties – including the client, architect, engineers, and contractor. 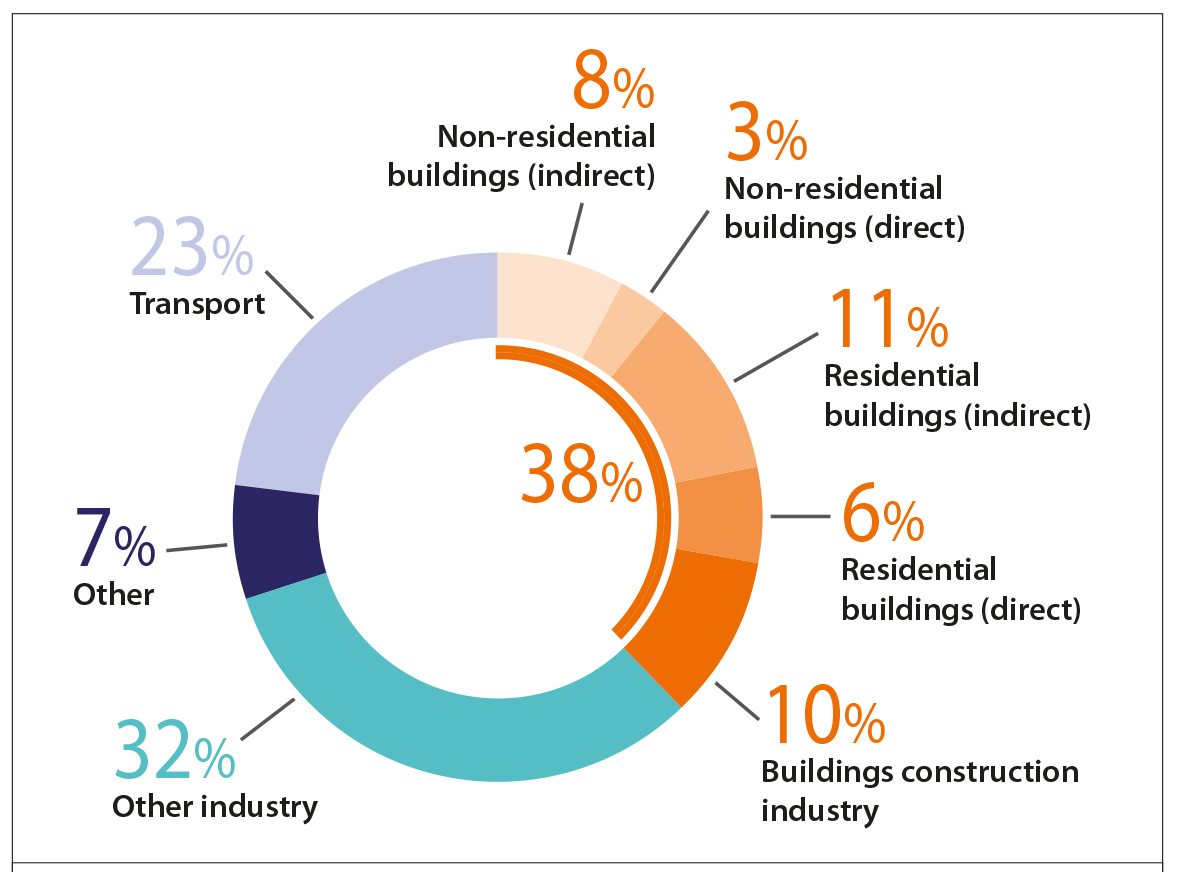 Global greenhouse gas emissions, with the proportions related to buildings shown in orange. ‘Direct’ is from fuel burnt on site – mainly in gas boilers – while ‘indirect’ is electricity use

It helped that Arup Associates is a division of Arup combining architects, engineers and other building professionals in an integrated team, so avoiding appointing multiple design consultants, and also that the firm designed the 1990s building and had kept excellent records. It was made more challenging by British Land’s desire to nearly double the area of office space

Reuse and recycle
The existing building had plenty of scope for reuse. In particular, it had spare structural capacity by modern standards; infilling part of the vast atrium and taking advantage of changed planning rules allowing greater height meant that engineers could increase the area of office space considerably. The existence of extensive records from the original construction provided greater confidence in the design of strengthening works.

Cut-through before-and-after diagrams of One Triton Square, showing the old square atrium reduced to half its width and three additional floors added, set back from the edges to minimise additional loads on the perimeter foundations

In choosing what to address to gain carbon (and cost) savings, designers of previous refurbishments have often gone for the ‘easy wins’ – one or two areas where the greatest gains can be made, which in this case would have included saving much of the existing concrete and steel structure. But on this project the team went much further, seeking out and exploiting every possible area of saving [see ‘Marginal gains’].

The most visible, and one of the  most innovative, initiatives was to reuse most of the existing external cladding. On most previous transform-and-reuse projects, stripping off all the old, tired, inefficient cladding and replacing it with a modern, thermally efficient façade was a no-brainer, producing a more attractive building and making savings in operational carbon. Exceptions were where parts of the old façade had important historical or architectural significance.

Examination of One Triton Square showed that 3,300 square metres of limestone cladding could be retained (and extended upwards using the same French limestone), and that the aluminium-and-glass twin-skin façade units could be removed, refurbished off site and then reassembled. The plan was for the original manufacturer to refurbish them in Germany, but some 25,000 transport miles were saved by doing the work in a pop-up factory less than 30 miles away in Essex.

This meant dismantling 3,500 square metres of the aluminium-and-glass façade – equivalent to a dozen tennis courts. Each unit was inspected, deep-cleaned and refurbished, with new gaskets fitted and external-facing sections of the aluminium re-anodised. Advances in glass-coating technology mean the new units will be more thermally efficient. Reuse of the façade units resulted in a 66% reduction in cost compared with a like-for-like replacement. 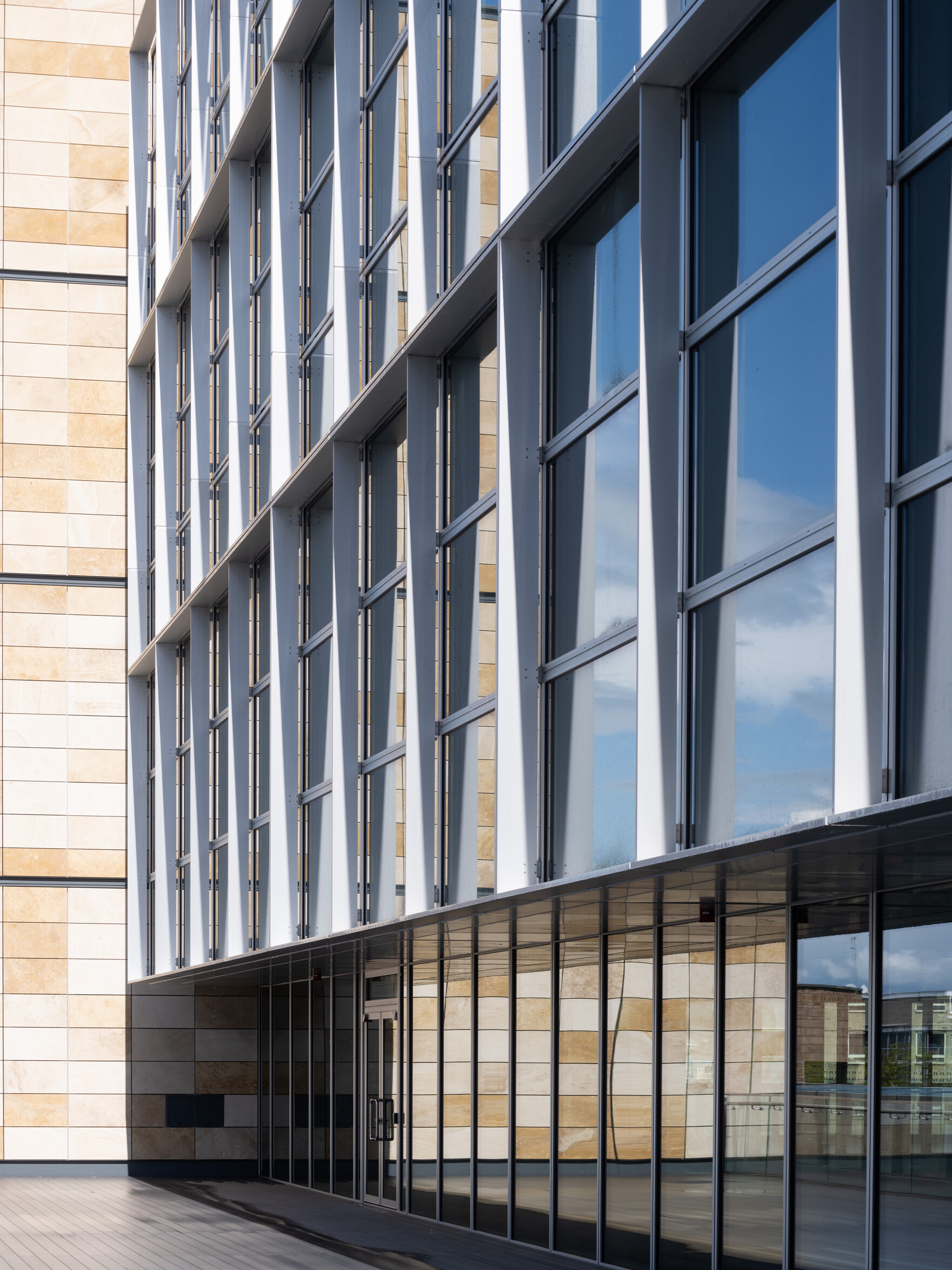 One Triton Square’s original aluminium-and-glass façade was removed, refurbished off site, and then reused on the building, resulting in a 66% reduction in cost © Arup

The original structure was essentially circular reinforced concrete columns over individual concrete piles founded in the London Clay beneath, the columns supporting concrete floor slabs and stabilised by steel-framed cores in each corner above ground level. Despite some ingenious weight-saving measures, the extra weight of the additional offices would increase the load on most of the columns. Under the central atrium infill where the number of floors was increased from two to 10, the loading increased almost threefold.

For the foundations, availability of excellent records from the 1990s, including the as-built pile toe levels and the level at which each pile encountered the London Clay during the original piling, enabled the strength of each pile to be back-calculated. Their capacity proved to be much higher than the original specified design load. Some foundation strengthening was still required, and new piled raft was employed to minimise supplementary piling and cost.

Most of the columns were strengthened by conventional encasement with new high-strength reinforced concrete, increasing the diameter by 250 to 300 millimetres. However, for a small number of columns where the increase in loading was less, a more innovative technique was used: the columns were instead wrapped tightly with fibre-reinforced plastic wrapping, which increased their strength by 40%, saved concrete, saved time in construction, and, most important, increased the diameter by just 8 millimetres, so resulting in virtually no reduction in lettable floor area.

Team expertise
One change illustrates the close coordination between different professions on the project. The additional office floors have been set back from the perimeter of the original building. This has become an architectural feature of the new building but was driven by the engineering. Setting the new-build back meant that the columns and foundations around the perimeter carry virtually no additional load, and so required no strengthening – which would otherwise have been very challenging immediately adjacent to the façade and basement perimeter.

Another key feature of the success at One Triton Square was the use of building information modelling (BIM). BIM models are computer files digitally representing all the physical and functional characteristics of buildings – from the main structure to the smallest piece of pipework – which can be extracted, exchanged or networked to support decision-making. They also aid communication between all the parties – including client, architects, engineers, contractors, sub-contractors, and suppliers. BIM is not new to construction, but rarely is it used to full effect. 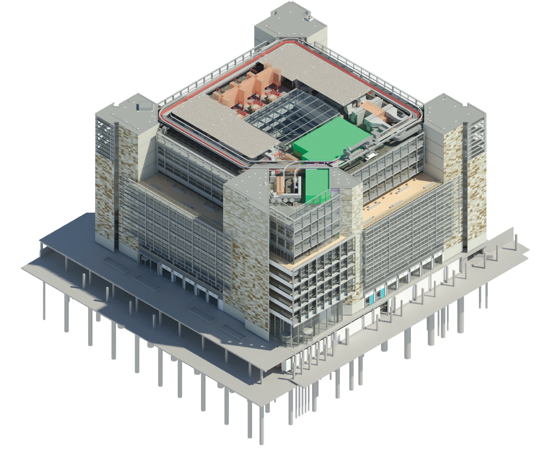 Development of the BIM model, with a virtual model of the existing building combined with the new structure, services and architecture © Arup

On this project, Arup had excellent pre-BIM records of the geometry and calculations for the old building, which were used to create an accurate detailed 3D virtual model of what was there, as a basis for modelling, integrating and communicating any potential additions and changes. In Arup’s real-time BIM environment, multiple models overlay and evolve together as the co-located team develop the design seamlessly. The model is open-access and used by all parties based on collaboration and sharing. It meant that the extensive historic data could be used fully, and design decisions involving multiple parties could be taken quickly and efficiently. Without a top-level BIM model, Arup believes many of the gains at One Triton Square would have been impossible.

Carbon savings
An estimated 40,000 tonnes CO2e (carbon dioxide equivalent, a standard measure of the global warming effect of greenhouse gas emissions) has been saved on One Triton Square compared with a typical new London office – a 55% saving, or enough to heat and power nearly 10,000 average UK homes for a year.

This comprises just under 25,000 tonnes of embodied carbon, mainly by reusing 33,400 tonnes of the building’s original concrete and 1,843 tonnes of the original steel. The remaining 15,000-tonne saving is in operational carbon over 20 years of use. Both benefited from multiple initiatives under the team’s ‘marginal gains’ approach.

BREEAM is the leading method of certifying the sustainability of buildings, with most new buildings seeking a ‘Very Good’ or ‘Excellent’ rating. Few attempt to achieve ‘Outstanding’, due in part to a belief that the extra measures would add around 5% to the cost. One Triton Square has blown this myth, by achieving BREEAM Outstanding with an extra estimated cost of just 0.3%.

Net office space has been increased by 85%, and the building is proving a commercial success –achieving the West End’s biggest pre-let in more than 20 years.

Lessons from the success of One Triton Square include the importance of a client and delivery team committed to common objectives, single-team working with good BIM, and in particular the importance of keeping the original records of a building after construction is complete – not just the design drawings and calculations but also the on-site team’s records of what was actually constructed. Without these, the transformation of One Triton Square would have been much more difficult, and some of the marginal gains would have been impossible. Yet frequently such records are not kept or get lost or destroyed over the years.