As usual, the latest James Bond film, No Time To Die, is packed full of gadgets and new technologies. Ingenia looks at some of the engineering breakthroughs inspired by, and featured in, the Bond movie back catalogue, including past MacRobert Award winners and finalists. 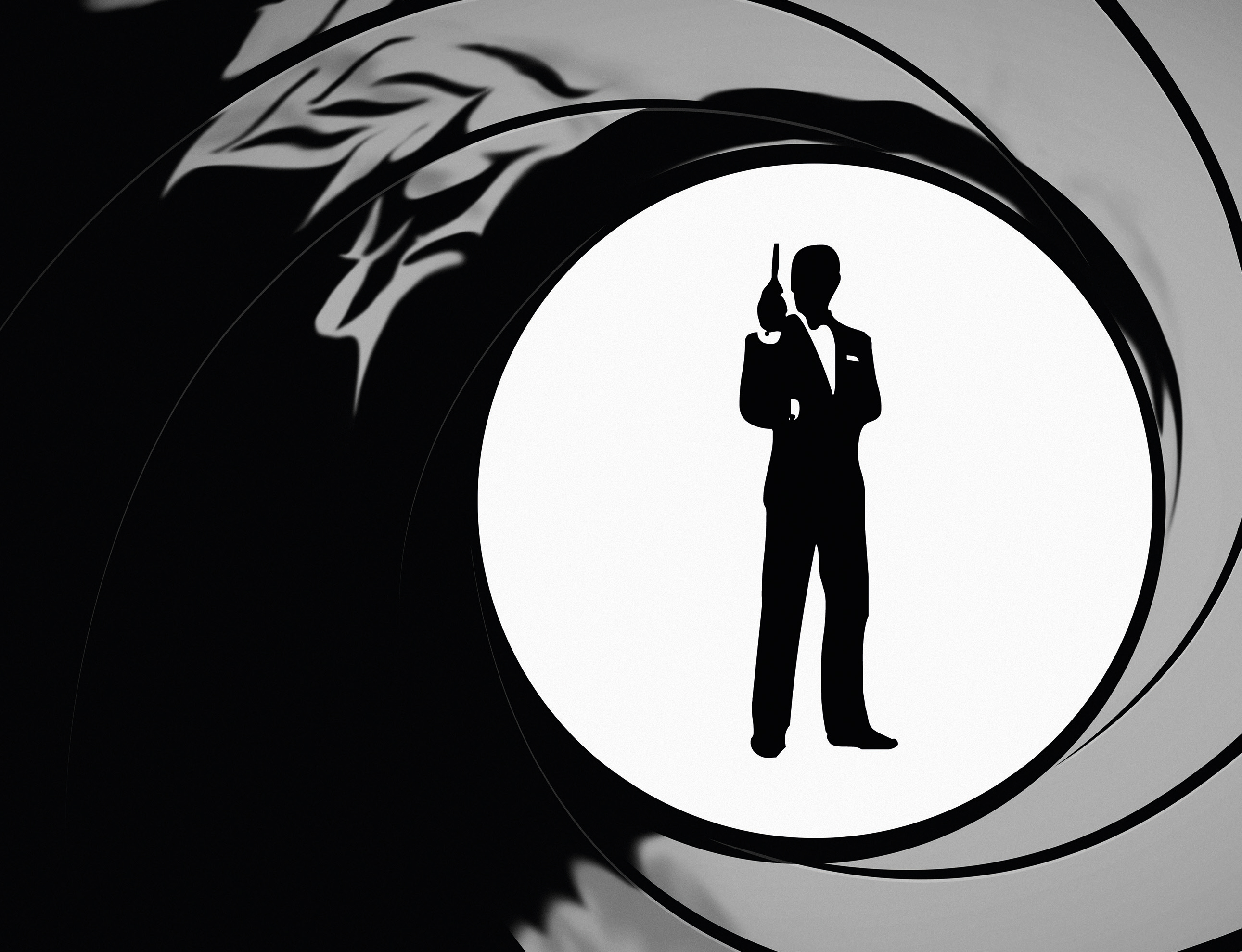 The James Bond series, both books and films, features an impressive array of gadgets and innovative technology. But these inventions are not always as unbelievable as they may seem © ShutterstockIn 2022, it’ll be 60 years since Sir Sean Connery first took on the role of Ian Fleming’s secret agent. Dr No was the first book to be turned into a movie and so began the highly profitable 007 film franchise. 1962 also saw the global launch of new technologies: audio cassettes, LEDs and computer video games. Dr Nofocused on the US space programme, at a time when Cold War tensions were running high and megalomaniacal villains were still the subjects of on-screen fear, rather than satire.

In this inaugural outing, Bond had a Geiger counter – used for detecting and measuring ionizing radiation – while his adversary communicated with missile guidance systems using radio beams sent via a submersible satellite. Such innovations seemed impossibly futuristic 60 years ago, although Dr No’s use of forward-facing technology established a principle of engineering innovation that has continued throughout all 24 follow-up films made by Eon Productions.

Some Bond-related technologies were so far ahead of their time that they depicted items yet-to-be invented, while others were innovations under secretive military development and still under wraps. Sometimes, intelligence services actually drew inspiration from the movies; Fleming was a good friend of CIA director Allen Dulles, who tasked his staff with replicating the poison-tipped shoe daggers used by Colonel Rosa Klebb, the main antagonist in From Russia With Love, in her attempts to stop Bond.

To commemorate Daniel Craig’s final outing as Agent 007, here’s a look at some of the companies whose innovations have shaped – and been shaped by – this cinematic legend. Several are synonymous with Bond, while others are less obviously related, yet they all bear the unmistakeable DNA of the world’s most enduring spy.

DnaNudge
DnaNudge is the first of the MacRobert Award winners in this list. It is one of an exclusive group of companies that have received the UK’s longest-running and most prestigious prize for engineering innovation. The firm’s pioneering technology taps into the DNA programming shown to dramatic effect in No Time To Die. Fortunately, it does so for very beneficial reasons, unlike those of Safin, Bond’s nemesis, who uses a DNA bioweapon to malevolently target 007. 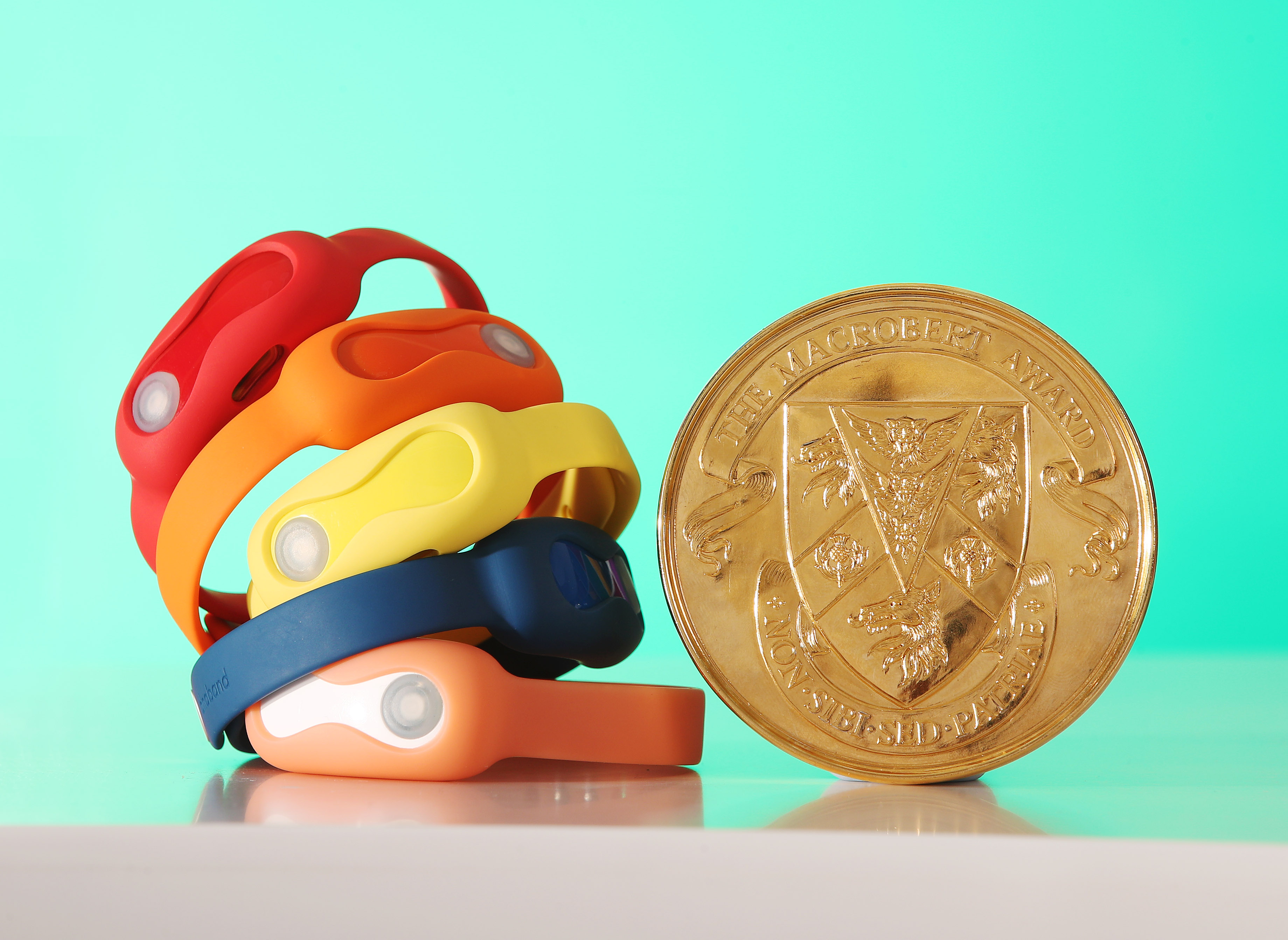 DnaNudge wristbands can scan barcodes and provide instant feedback as to the compatibility of the products with the user’s genotypeAt its walk-in London store, DNA is extracted from a simple cheek swab and analysed to identify individual genetic risk for key health traits – including obesity, diabetes, hypertension, and cholesterol. The results are then securely loaded onto a compact device – the DnaBean – that can then be worn as a wristband. As well as supporting barcode scanning reports on the genetic suitability of certain food and skincare products for the wearer’s DNA, the DnaBean monitors inactivity, with the aim of reducing sitting time. The company’s NudgeShare technology allows users to shop for family members based on their genetic profile.The flexibility of this technology was demonstrated when DnaNudge adapted it to quickly create a rapid, lab-free, real-time, PCR COVID-19 test last year. It is now in use in NHS hospitals and healthcare settings around the world. It was this achievement that won the company the 2021 MacRobert Award.

Aston Martin
As the most instantly recognisable Bond brand, Aston Martin’s history of engineering innovation stretches back to the firm’s Atom prototype of 1940. This futuristic model featured semi-automatic transmission and a monocoque chassis, decades before rival manufacturers adopted similar technologies. Numerous production Aston Martin cars have appeared in Bond movies with the DB5 being the most noticeable, having appeared in eight films. For its inaugural outing in Goldfinger (1964), it debuted a map tracking system, an early form of satellite navigation. This was two years before General Motors stated that navigation systems couldn’t be offered in a production car, and two decades before Japanese manufacturers developed rudimentary navigation using the now-obsolete dead reckoning principle – the process of calculating the current position of a moving object by using a previously determined position and then incorporating estimates of speed, direction and course over elapsed time. Having been inspired by Goldfinger’s portrayal of tracking technology in the film, the CIA attempted to develop its own platform, but was unable to maintain connectivity in built-up areas. 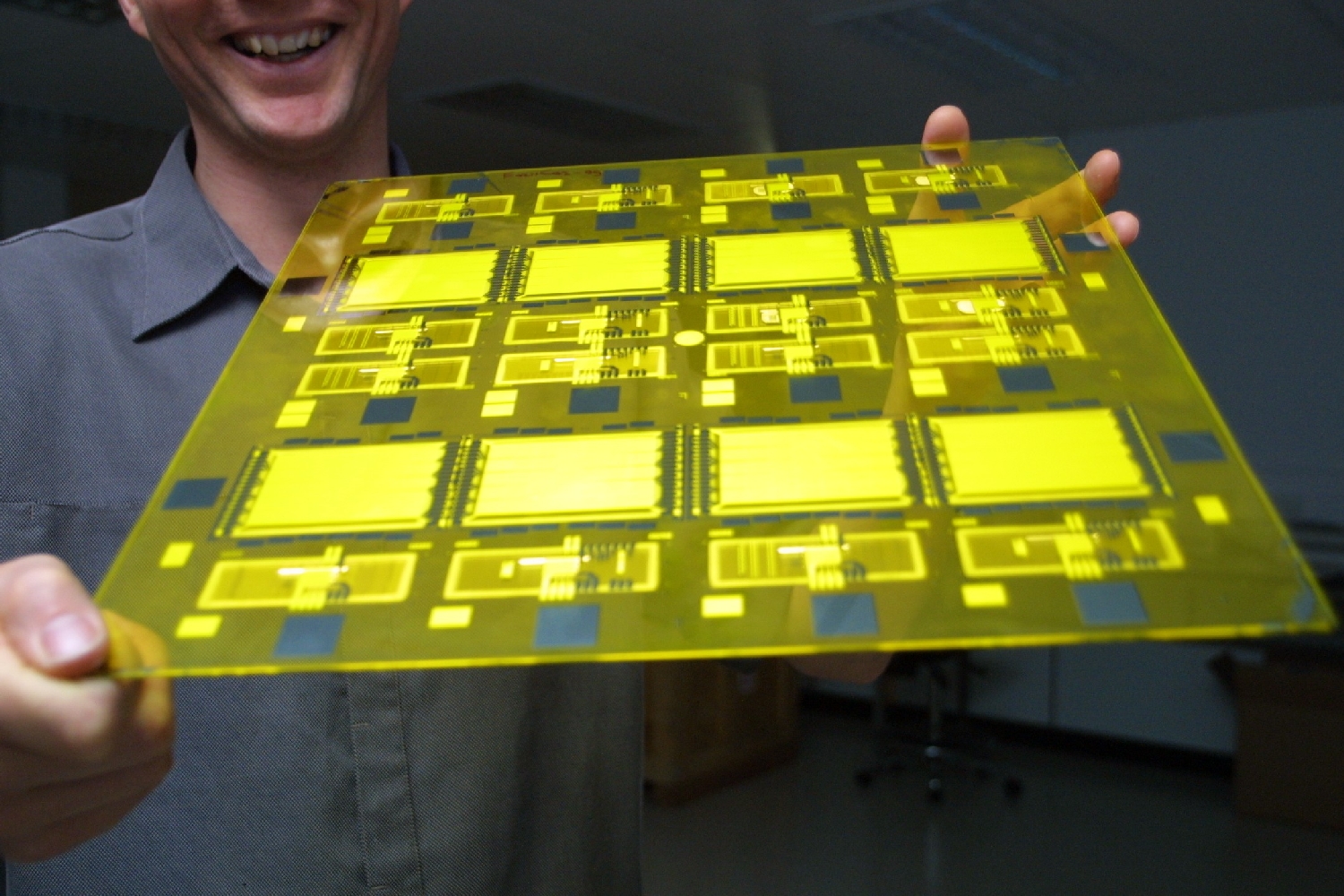 Some Bond-related technologies were so far ahead of their time that audiences struggled to accept them. The cloaking device that camouflaged 007’s Aston Martin Vanquish in Die Another Day (2002) was based on reflective shield technology being developed at the time by the Ministry of Defence – these light-emitting polymers went on to win the MacRobert Award that same year. Passing an electric current through certain polymers makes them emit light. The MacRobert Award winning team that year, Cambridge Display Technology, was formed to commercialise the technologies that evolved from this discovery. Polymer organic light-emitting diodes (P-OLEDs) offer the potential of a true flat-screen TV or computer display, which can be created on one sheet of glass or, ultimately, plastic so they could be rolled up. They offer many advantages over the liquid crystal displays and plasma displays used in conventional flat panel displays, including lighter weight and lower energy use.

Less controversially, the 10 DB10 models manufactured exclusively for Spectre (2015) adopted dot matrix ventilation on the bonnet instead of a radiator grille. The DB10’s front end looked outlandish at the time, but electric vehicles nowadays have closed grilles in the absence of water-cooled engines, which require cooling radiators.

Seiko watches
Seiko is among a handful of companies, along with Aston Martin, whose products have appeared more than once in the James Bond movie franchise. In The Spy Who Loved Me (1977), a Seiko LC Quartz digital timepiece was shown printing out a telex on label maker tape. This was almost a decade before the first alphanumeric pagers reached the market – the pagers of the late 1970s were restricted to communicating via beeps or vibrations. It was to be another 40 years before the Apple Watch codified the principle of receiving messages on a watch.

Seiko’s next notable contribution to the 007 film canon came in Octopussy (1983), when its G757 Sports 100 wristwatch used a homing device to track a Fabergé egg. As with the Goldfinger map tracking system, the idea that a watch could offer a GPS location seemed implausible at the time.

However, there were other smart watch technologies in the pipeline – the 1980s saw the first wireless heart-rate monitors being installed in consumer watches, alongside 3D accelerometers. In 1999, a GPS watch made its debut at the Consumer Electronic Show in Las Vegas. However, this pioneering device only had 10 hours of battery life – a shortcoming that would not have impressed Q, the series’ fictional head of the British Secret Service’s research and development division.

Cambridge Silicon Radio
In Tomorrow Never Dies (1997), Bond is captured by newspaper magnate Elliot Carver. The megalomaniacal proprietor (quite possibly modelled on a real-world contemporary) is filmed writing 007’s obituary on a wireless keyboard. It would be another two years before Bluetooth was launched and made real the concept of wireless peripheral communication across the 2.45 GHz frequency. Similar short-link radio technology had been under development in Sweden since 1989, and this may have served as the inspiration for Carver’s computer. 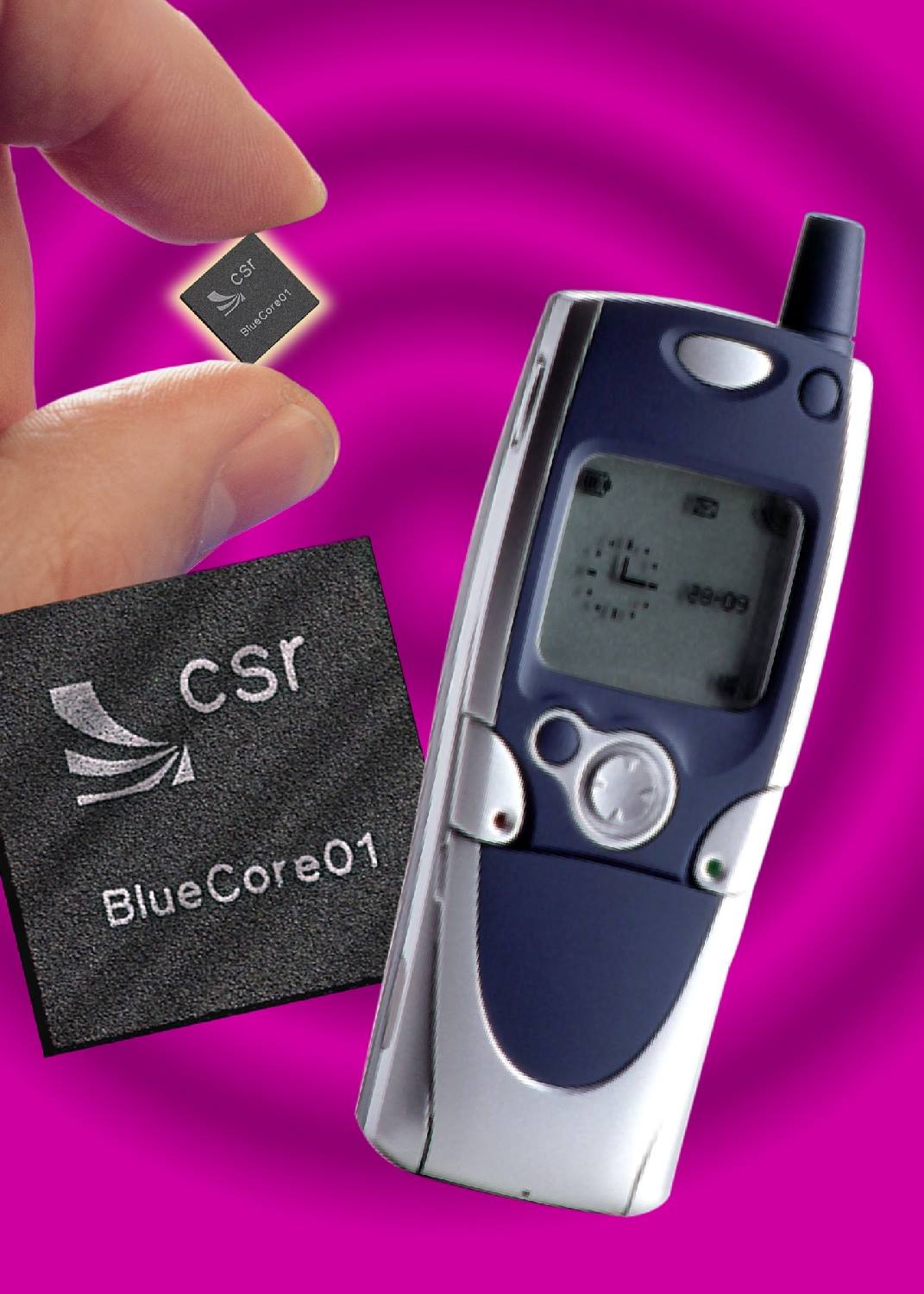 As Tomorrow Never Dies drew audiences into multiplexes, the founders of Cambridge Silicon Radio were preparing to launch the company that would become a leading global wireless technology specialist. Its revolutionary CSR BlueCoreTM chips, which incorporate a radio transmitter/receiver, won the 2005 MacRobert Award. The technology was a major breakthrough in bypassing the ‘noise’ produced by electrical signals crossing the small chip, which would normally swamp a radio receiver working with micro-volt signals. Frequency planning enabled the radio component to communicate through the noise of the chip’s digital traffic.

The BlueCoreTM chips became a prominent platform solution for Bluetooth products, including mobile phones and medical devices, and the first Bluetooth- equipped mobile phone (Ericsson’s T36 flip-phone) made its debut three years after Carver’s wireless keyboard. Today, even the remastered Nokia 3310 from 2017 has Bluetooth technology integrated into it, reflecting the ubiquity of this RFID-based (radio-frequency identification) platform.

Darktrace
As a two-time MacRobert Award finalist, Darktrace’s presence on this list is less to do with its products and more to do with the company’s back story. It was founded by intelligence experts from MI5 and GCHQ alongside mathematicians from the University of Cambridge, where Bond studied in Fleming’s novels. The author would undoubtedly have been impressed by Darktrace’s focus on using artificial intelligence and machine learning to identify potential information security breaches, effectively developing an enterprise immune system. This is a new form of cybersecurity based on Bayesian mathematics, hosted in the cloud and offered as a software as a service model (see ‘An immune system for computers’, Ingenia 81).

Darktrace’s software explores computing systems as a web crawler might analyse a website. It renders every component in a 3D diagram that lists each port, path, switch, and server. The system then analyses interactions between these disparate components, establishing patterns and permissions from central servers to remote users and everything in between. As soon as an abnormal event occurs, the system will identify this anomaly and react far more quickly than a human could – if they even understood that this event was unusual or potentially harmful.

What’s next?
James Bond was able to make his Aston Martin invisible in Die Another Day (2002), maybe that will be a vehicle security option in the future. An inflatable ski jacket that saved him during an avalanche in The World is Not Enough (1999) has become a purchasable commodity as a smart motor bike airbag jacket.

Now, we have to see whether the technology debuting in No Time to Die remains too fantastical to be developed. Will a folding wing glider that becomes a submersible ever see the light of day? Will the magnets that line a lift shaft and slow the fall of people jumping down it ever be implemented? Only time will tell whether these exciting cinematic moments will be turned into real-world applications.

How does that work? Wastewater epidemiology

Countries across the world are sampling and testing wastewater to identify and track cases of COVID-19.

The sound before the slide

Engineers at Loughborough University have developed a tool that listens for sounds of ground movement to detect and warn of landslides.