Did you know?
• In recent years, millions of litres of oil have leaked from corroded pipelines,
devastating ecosystems on land and at sea
• Corrosion can be caused by microorganisms living in oil sludge
• Along with a variety of higher-tech solutions, sniffer dogs can also detect
hidden corrosion

The oil and natural gas that provide over 55% of the world’s energy are transported by enough pipeline to circle the Earth 30 times. Corrosion is a huge problem for all this infrastructure. Catastrophic leaks can be caused by centimetre-sized holes, while some types of corrosion are hidden from view altogether, until it’s too late. Geoff Watts talks to sensing expert Prafull Sharma about a new detection tool he developed with his team at Cambridge-based startup CorrosionRADAR to combat one of the most insidious types of corrosion. 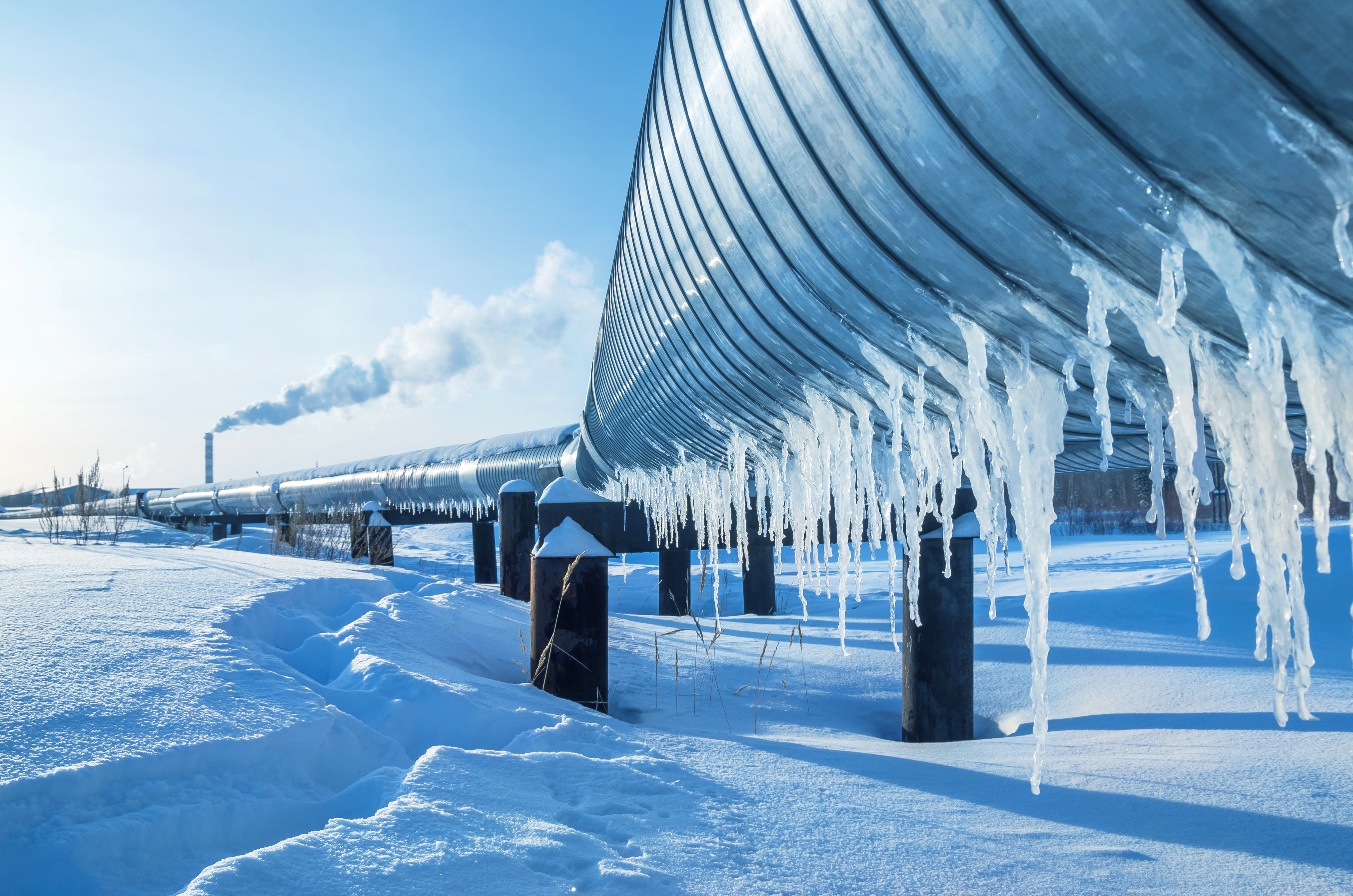 Pipelines are at the mercy of the elements, which fast-track corrosion. If allowed to gain a foothold, corrosion can cause chemical spills that devastate their surroundings © Leonid Ikan/iStockphoto

In 2006, a pinprick-sized hole, which gradually expanded to a diameter of less than two centimetres, was responsible for one of the worst oil spills to hit the tundra of Alaska’s North Slope. After 267,000 gallons of crude oil leaked from the corroded pipe at the Prudhoe Bay facility, oozing beneath the snow, government officials said it could take up to a decade for the tundra vegetation to return to normal. Experts believed the cause was corrosive bacteria, growing inside the pipe.

Two and a half years later, at the same facility, a high-pressure natural gas pipeline ruptured, launching pieces of mangled steel across the tundra. Luckily, neither loss of life nor environmental catastrophe took place as a result. Like the 2006 spill, the rupture was caused by corrosion, but this time, the culprit was not bacteria. Instead, moisture accumulating inside the layers of insulation and weatherproofing cladding around the pipe had caused the rupture – a phenomenon known as corrosion under insulation.

Corrosion, you might say, is to engineers what cancer is to doctors. Not literally, of course, but they do share a clutch of similar characteristics. Both can be triggered by the conditions in their surroundings. Both may be far advanced before detection. Both can sometimes be spotted by eye, but not always. If allowed to proceed unchecked, both can be destructive. The cost of remedying them when spotted late in their development is often high.

Corrosion and cancer also share one other feature: the benefit of early detection. Just as doctors have paid increasing attention to this, so have engineers – with good reason. The cost of corrosion to health and safety, to the environment, and to industry in monitoring and remedying it, is staggeringly large. Indeed, the economic cost of corrosion is staggering – estimated at more than £2 trillion annually worldwide, or 3% to 4% of global GDP (gross domestic product). Unsurprisingly, researchers are developing new measures to detect corrosion before its destructive consequences can take place.

Invisible destruction
One recently developed early detection technology is now finding a key role in the oil and gas industries. Paradoxically, its primary value is in detecting corrosion at sites where you might imagine it would be most easily spotted: exposed pipe work. Look at any oil refinery or petrochemical plant and one of its striking features will be a jumble of large, exposed tanks and tubes linked by interconnecting pipes that twist around and between them. You would think that corrosion here would surely be visible and easily discovered.

Not so. Although generally accessible, many pipes, pressure vessels and other components are insulated to keep the fluids inside at an optimum temperature. The insulation material is protected from the elements by a metallic casing. But such coverings are seldom wholly effective and some moisture, mostly rainwater, will find its way in. Any accumulation of moisture between the insulation and the surface of the innermost iron or steel pipes promotes corrosion, in the form of rust, that may become visible only when the insulating material is removed. The phenomenon, corrosion under insulation, accounts for some 60% of pipeline failures in the oil and gas industry alone. It can be tackled in several ways – and now mechanical engineer Prafull Sharma and his colleagues have added one more.

Having spent many years working for General Electric, Sharma was aware of the damage caused by corrosion. The model solution he had in mind was the nervous system of the human body. The sensory nerves that carry pain messages to the brain do more than signal the existence of such pain; they also pinpoint its location. What Sharma wanted was a system that would continuously monitor for corrosion in an industrial installation and tell the operator the site of any trouble. 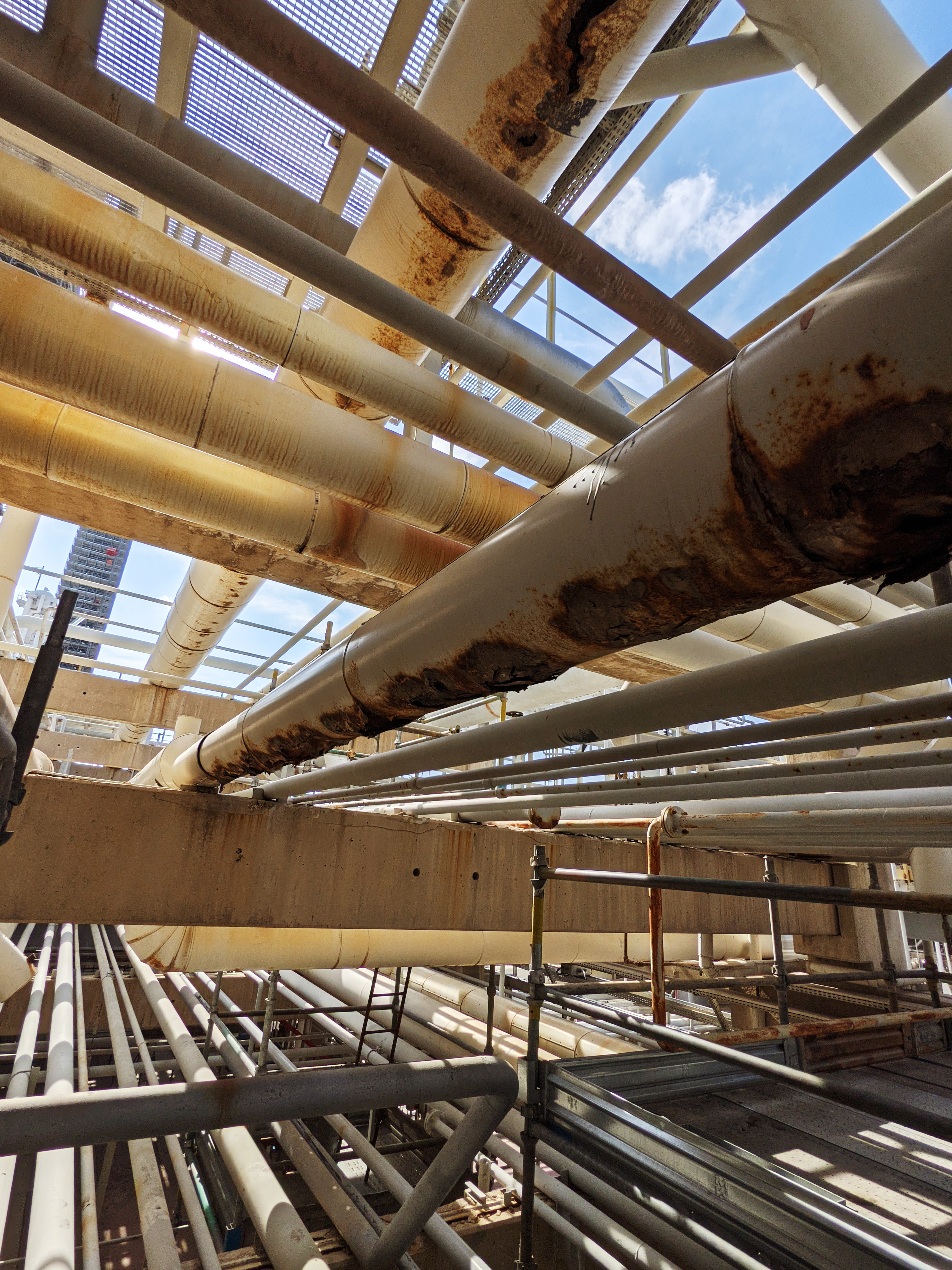 Pipe work at refineries is one of the places badly affected by corrosion under insulation. It can become visible at the bottom surface of pipes, where moisture is most likely to accumulate

During his PhD at Cranfield University, Sharma co-invented a technique to do just this, inspired by time-domain reflectometry, which is used by the telecoms industry to detect flaws in cables. In this technique, an electromagnetic pulse is sent along a suspect cable. If a fault is encountered, the pulse will be partially reflected; if not, it will be reflected back upon reaching the end. Knowing the originating pulse’s departure time, the arrival time of any partial reflections, and the velocity of the pulses, the operator can calculate where along the cable the fault is located.

Detecting moisture, detecting rust
For rust to form, moisture must be present: so in a sense, water is a marker of rust. This means a technique able to signal the presence of one will highlight the likely existence of the other. Even if corrosion has not yet begun, being able to detect the key factor driving it – water – opens the way to preventive intervention.

Sharma’s invention, electromagnetic-guided radar, uses the same principle as time-domain reflectometry. It relies on a long, thin, flexible sensor laid along the surface of a pipe or storage vessel, beneath the overlying insulation. Its positioning is chosen to ensure that it runs wherever moisture is most likely to accumulate: on the lower surface of pipes, for example. One end of the sensor wire is connected to a control box that delivers the electromagnetic pulse. The wire acts as a waveguide (a structure used to direct waves along its length). As the pulse travels along the sensor, the presence of moisture anywhere along its length triggers the partial backward reflection of any pulse traversing it.

This partial reflection arrives back at the control box before the original pulse (which will have travelled on to the end of the wire and been reflected). Using the time difference between them allows the system to locate the moisture that triggered the reflection and therefore, the conditions that foster corrosion. If moisture is detected in several places on the sensor, it will generate multiple reflected signals. Data from the system is then transmitted to its operators for analysis, who can plan repairs if needed. It can even be used to predict the conditions that foster corrosion in a pipeline or plant. Armed with this understanding, operators can plan a programme of proactive maintenance to minimise their individual risks.

In new installations the sensor wires can be fitted to pipes and vessels during construction, and before the overlying insulation is applied. To use electromagnetic-guided radar in existing infrastructure, insulation must first be stripped off – a routine maintenance process. The frequency of these replacements varies according to the location of the plant, and other local circumstances. It may be as often as every three or four years, or as infrequently as once a decade. 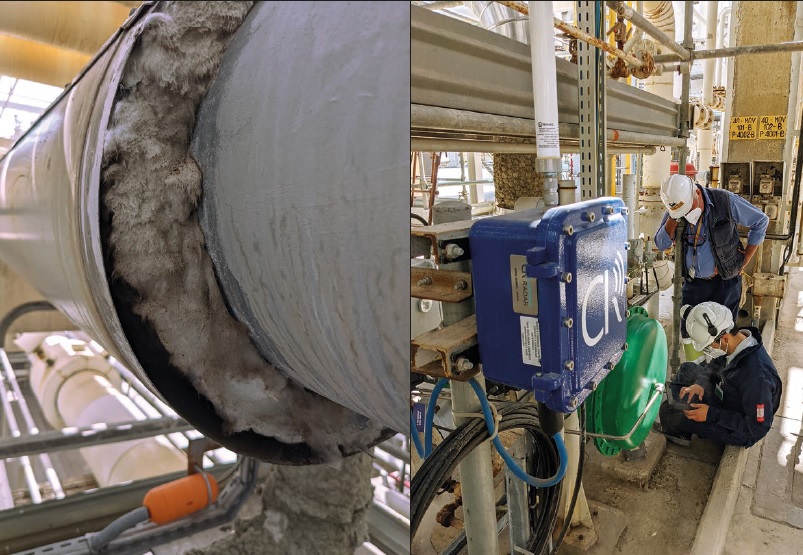 Now, this predictive corrosion monitoring tool has been patented and commercialised by a Cambridge-based company, CorrosionRADAR Ltd, of which Sharma is Chief Technology Officer and Co-Founder, along with Chief Executive Officer Chiraz Ennaceur and Chief Operating Officer Mehrdad Silatani. The company has already caught the attention of several agencies that advise corporations on the topic, and has worked with several international energy companies. Some 10 plants in locations from Europe to Thailand have installed the system.

Direct cost comparisons with other corrosion detection techniques are difficult to calculate, as most of them are used for spot checks if corrosion is already suspected. Electromagnetic-guided radar, by contrast, is a continuous monitoring system. Real-world data is still limited as none of the systems implemented have been in place for more than three years yet. But based on experience so far, Sharma talks of 65% overall cost savings in periods where electromagnetic-guided radar is used instead of conventional practices. An incidental benefit is that the technique will also detect leaks caused by corrosion inside a pipe or vessel.

Although CorrosionRADAR’s tool is fairly distinctive commercially, the team is not the only one to have come up with using guided electromagnetic waves to detect corrosion. Between 2008 and 2012, researchers at Imperial College London’s Research Centre in Non-Destructive Evaluation pointed out that a metal pipe surrounded by a metal jacket of the kind often used to clad the insulating material constitutes a coaxial waveguide (meaning a waveguide made from two concentric metal cylinders). Microwaves, they suggested, could propagate through the insulation between the two metallic surfaces. They devised antennae, placed within the insulation, to generate microwaves. Although the method worked in laboratory trials, it was not taken forward commercially.

As often in non-destructive testing, there is no one technique that fits all circumstances. But many of the established methods are inspection techniques intended to offer a definitive diagnosis in one location at one time. Electromagnetic-guided radar provides a way to continuously monitor extensive networks of pipes and vessels and alert workers not only to the existence of corrosion, or the risk of it, but its location. Other methods can then be used to inspect the area of concern in more detail. All told, perhaps this physiology-inspired technique can, in tandem with a toolkit of others, help to keep the blood vessels of today’s energy system safely flowing, leak-free.

Biography
Prafull Sharma is Chief Technology Officer at CorrosionRADAR. He co-invented electromagnetic-guided radar, among several other inventions, and has over 16 years of industrial experience. Previously, Prafull worked for General Electric R&D where he developed several sensing technologies. He has a PhD from Cranfield University and an engineering degree from the Indian Institute of Technology Madras.

Lab-on-a-chip technology, developed to help us live healthier, has been adapted to provide rapid, lab-free tests for COVID-19.

How I got here – Rose Grey

For Rose Grey, an early love for science led to a career as a software engineer.

Accurate GPS positioning in cities can be affected by obstructions like tall buildings. A new technology aims to improve this accuracy.