Love them or hate them, NFTs took the art world by storm in 2021. But even this far into their explosion in popularity, many people still have no idea what they are and how they work.

Over the last few years, the hype surrounding non-fungible tokens (NFTs) has snowballed as investment in them has skyrocketed. While it may bring to mind pixelated GIFs of flying cartoon cats, accusations of a huge Ponzi scheme, and a very real carbon footprint, some consider them a genuinely useful technology for a future moving increasingly into the digital realm.

In a nutshell, an NFT is a unique digital signature used to prove ownership of an item, typically something collectable such as a digital artwork. NFTs are traded using blockchain: a distributed database, permanently stored and continually updated across a network of computers (see ‘How does that work?’ Ingenia 72). ‘Blocks’ represent transactions and can be locked onto the rest of the blockchain after verification. Tokens traded can be fungible or non-fungible.

This concept of fungibility is key to NFTs. Money is fungible: you could give a friend a £5 note in exchange for them sending you £5 on PayPal and you would still end up with £5. On the other hand, a Picasso painting is non-fungible. Even an exact replica of it wouldn’t be worth the hundreds of millions that the original is worth. Essentially, if something is non-fungible, it means it cannot be substituted for another similar item.

Returning to blockchain, a fungible token (such as cryptocurrency) stores value, whereas NFTs store metadata associated with the item in question. This metadata includes a unique ID and blockchain contract address, and usually, the creator’s wallet address. It is what separates an NFT of, say, an algorithmically generated image of a cartoon monkey, with what you’d download if you were to right-click and ‘Save As’ that image from a website. A bit like a receipt or the deeds to a property, it proves who owns it, who sold it, and when the transaction took place.

“What’s the point in them?” is a question being asked by many. The answer differs. For digital artists, NFTs are a way to sell their work. This wasn’t possible until now, as without an NFT, files could be copied without anyone knowing which one the original was. Despite fluctuating demand, the UK’s first NFT gallery opened its doors earlier this year; while in March 2021, Christie’s hosted an auction for an NFT that sold for $69 million. 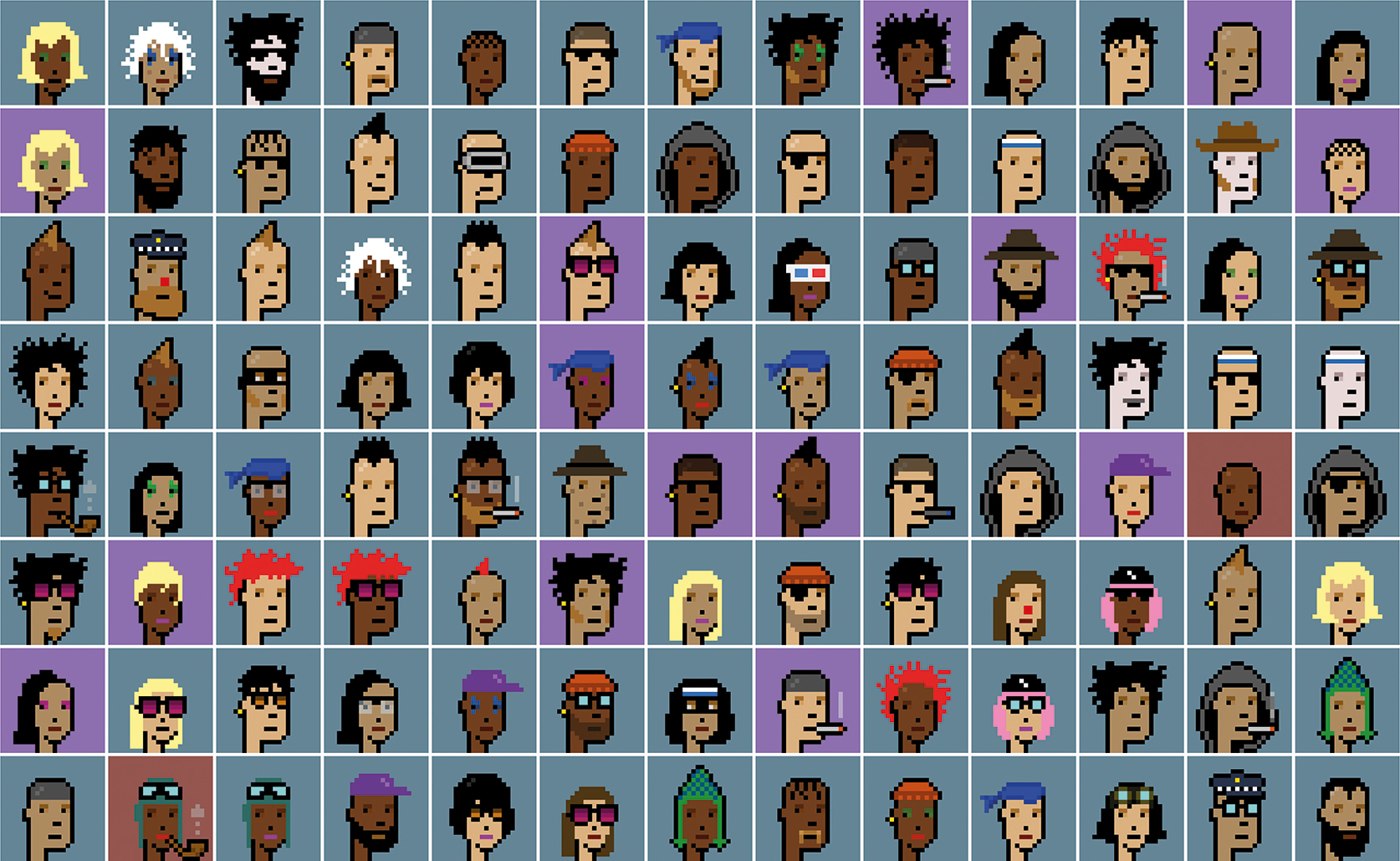 A set of CryptoPunk NFTs

The cynical say they are a gimmick, perhaps partially because of celebrity support from the likes of Paris Hilton and Gwyneth Paltrow. There’s also the status symbol element: perusing the Twitter accounts of Eminem, Madonna or Jay-Z will show you an NFT profile picture bought for hundreds of thousands of dollars.

However, beyond expensive JPEGs (some depicting stick figures and cartoon stones), the market is growing for NFT-traded goods for the metaverse – the virtual world. Virtual property and avatars are being created and sold, and so is a virtual clothing line from Adidas.

Real-world applications for NFTs are being proposed, too. Associating an NFT with a highvalue physical object, such as a rare whisky, could help to verify its authenticity. An even more interesting idea is using NFTs to give patients better control over sharing their electronic health records for medical research, by publicly recording who requests access.

And what about the carbon footprint? Blockchain transactions are notoriously energy intensive. An analysis of 18,000 NFT artworks estimated that the average carbon footprint of each amounted to an EU citizen’s energy consumption for two months. In April, the Ethereum blockchain, which reportedly uses as much power annually as the Netherlands, conducted its first major trial of a new mining system that uses 99% less energy. Although it says it will transition to the new system by autumn 2022, this move has been on the cards for six years. If NFTs are indeed to become the economic foundation of the virtual world, this is a problem that needs solving, if it is to coexist with an intact physical world.

Metamaterials, metalenses and beyond

Techniques used to manufacture semiconductors are being used to make lenses ultrathin, leading to even slimmer smartphone cameras.

As wind turbine blades are being retired in increasing numbers, engineers are coming up with solutions to extend their use.