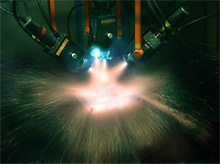 Spray forming, a new method for manufacturing hard tooling, has the potential to provide significant cost and time savings in the production process. Its developers, Patrick Grant and Stephen Duncan, discuss the process and where it fits into the current industrial landscape.

Tools, also known as dies, are required in almost every manufacturing process. Their significance is such that the annual global market for tooling is 60 billion US dollars. In the past, tool-making required a skilled workforce and was dominated byWestern economies, such as the USA, Germany, Sweden, Japan and the UK. Increasing automation, primarily the use of computer numerically controlled (CNC) machining (precise machining controlled by a pre-programmed computer), has meant that simpler tools are now commodity products.

Other countries, particularly those in developing economies, have entered the tooling market. The lower cost of labour gives toolmakers in these countries a 30% to 75% cost advantage over Western toolmakers. In response, Western manufacturers have moved to the ‘niche’ end of the tooling market, producing high precision tools, that often incorporate complex features. With these types of tools, it is their robustness and ability to produce a high number of components that is critical.

When a new mass production vehicle is developed, the tooling is frequently the item that takes the longest to arrive. This long lead time, or delayed arrival, can hold up the entire production process. The large tools that press steel or aluminium sheet to form body panels can take six to nine months to manufacture. In financial terms, large tools also form a significant percentage of the overall investment required to introduce a new vehicle. 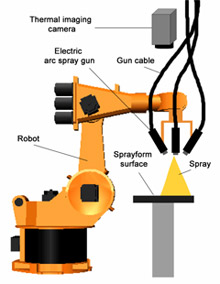 A schematic diagram showing the arrangement of the robot, spray guns, substrate and thermal imaging camera in the spray forming cell

Many attempts have been made to develop new manufacturing technologies that reduce the long times that have become characteristic of the machining industry. One approach can be classified broadly as direct tooling, where the tool is manufactured directly from a CAD (computer aided design) digital file, as in CNC machining. Current direct tooling machines away from a block of steel, a subtractive process. The newest direct tooling processes are additive, aiming to build up the 3D shape from nothing.

The second approach is indirect tooling where the tool is formed via an intermediate step, referred to as the ‘master’. This master is a physical 3D shape which can be copied many times, in order to produce the tool. It might seem retrogressive to introduce another step when many direct tooling processes are effective without it. However, the introduction of this step ensures the production of tools that are strong and robust enough to produce a higher volume of components in a process in which it is critical that nothing goes wrong.

Direct tooling offers the greatest reductions in lead times. These processes can manufacture tools in under eight weeks and can be used to produce small lots of components. Examples of direct tooling processes include (1) layered object manufacture (typically the brazing together of layers of laser-cut steel sheet), (2) selective laser sintering of a powder bed, where powdered steel is fused together into particular shapes by a laser beam – tools can be built up by fusing together layers of shapes, and (3) 3D welding.

Spray forming of tools and dies has been in existence for several decades. However, the process was previously restricted to the spray forming of only relatively ‘soft’ tools in zinc or zinc alloys.

In the case of indirect tooling processes, where the intermediate ‘master’ step is required, the master pattern tends to remain undamaged by the processes. Therefore, it can be re-used and its manufacturing costs are incurred only once. Indirect tooling processes can be used to produce ‘soft’ (non-robust) tooling for short run manufacture, or ‘hard’ (robust) tooling for mass production.

The authors are developing a new indirect hard tooling process, called spray forming. The spray forming process is exciting in that it has the potential to produce steel tools that compete on performance with the largest CNC tools, whilst providing cost and time savings.

Spray forming of tools and dies has been in existence for several decades. However, the process was previously restricted to the spray forming of only relatively ‘soft’ tools in zinc or zinc alloys. These tools were suitable only for prototyping or short runs of components. Attempts had been made to extend the range of materials that could be sprayed to more robust engineering alloys, but these had failed because of problems associated with the excessive distortion and cracking of the sprayed shells.

The potential of spray forming steel was realized through a collaboration between the team at Oxford University and the Ford Motor Company. Ford had demonstrated that it was possible to spray steel tools successfully, but at that stage, did not have sufficient understanding to scale-up the process to industrially relevant sizes.

The process begins with a CAD model of the required tool. From this a master is produced in ‘modelling board’, which is an epoxy-bonded ceramic powder that machines easily to a close tolerance. A process known as freeze casting, which produces structural ceramic shapes accurately, is then used to replicate the master shape and becomes the sacrificial ceramic shape, or substrate, onto which liquid steel is sprayed.

The liquid steel solidifies rapidly to form a steel ‘shell’ that replicates both the fine details of the substrate and its overall geometry. The thickness of the steel shell increases by typically 1 mm every five minutes until a shell of approximately 15 mm has been created. The shell is removed from the substrate, trimmed and backed with a metal-filled epoxy resin, and it is then ready for service.

Discussions with Ford in North America showed that the spray forming process was viable for robust tool manufacture providing it could be moved from a laboratorybased technology towards a semi-industrial process. Only then could its viability be truly assessed.

Turning up the heat 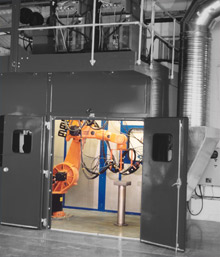 The spray forming cell, showing the industrial robot, attached spray guns and mounting pillar for the substrate to be coated © Patrick Grant and Stephen Duncan

The major obstacle in previous attempts to manufacture steel tooling via spray forming has been the excessive warping and distortion, known as deflection, of the steel shells, both during manufacture and as they cool down to room temperature. In order to understand this behaviour better, experiments were undertaken in which the average temperature of the shells was controlled carefully throughout their manufacture, and any deflection was monitored using a sensor. Two temperatures of approximately 215 °C and 365 °C were identified where little or no deflection of the shell occurred. At 215 °C, deflection occurring in the initial stages of the process was reversed by subsequent compressive stresses so that, overall, there was no deflection by the end of the process.

However, at 215 °C the overall deflection depended upon the final shell thickness, whereas at 365 °C the thickness of the shell that could be formed was more or less unlimited, meaning that 365 °C was the most desirable temperature. At a temperature of 365 °C, the rate of evolution of bainite (a particular arrangement of iron and carbon atoms) in the microstructure of the steel, and the associated transformation strains, balances the rate of thermal contraction of the shell due to cooling. Consequently, at room temperature there is little or no net residual stress and strain in the shell, and therefore no deflection.

The liquid steel solidifies rapidly to form a steel ‘shell’ that replicates both the fine details of the substrate and its overall geometry. 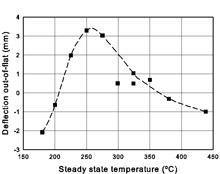 Following this research, a control system was implemented that used thermal imaging measurements to regulate the average shell surface temperature to within ±3 °C of 365 °C. This has allowed a range of dimensionally accurate tools to be manufactured successfully by spray forming.

In total, research work regarding the spray forming process has led to the filing and award of four new patents. These have been in areas concerned with: path planning of robot motion to avoid temperature gradients developing in deposited shapes; on-line control of spray deposition and other processes; and approaches to filtering and manipulation of thermal images for control applications.

Spray forming of tools will never replace CNC machining. However, it will complement it and has the potential to penetrate tooling markets where it can offer significant time and cost savings. In the case of polymer injection moulding, tools tend to be relatively small (less than 300 mm x 300 mm), so even though spray forming can manufacture a suitable shell, the post-spray machining required tends to undermine the cost benefit provided by spray forming. By contrast, for large press tools with less demanding geometries, spray forming can provide a viable alternative to CNC machining.

Although spray formed tools are typically not as robust as those produced by CNC machining, the consumer-led trend towards shorter product cycles means that high levels of robustness are not always necessary and, for many applications, the mechanical behaviour of spray formed tools has been shown to be fit for purpose. 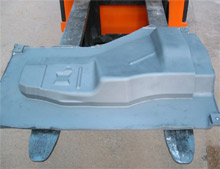 To maintain global competitiveness,Western toolmakers must identify and penetrate tooling markets in which tool cost is not the primary competitive factor. In the case of large press tools for the automotive sector, a market opportunity exists for new processes that can produce tools capable of 100,000 pressings with significantly reduced lead times compared with CNC machining.

By eliminating the previously unacceptable shell distortion, spray formed tools that are suitable for use in the production environment have been manufactured. So that the full potential of spray formed tools can be explored, plans are currently in hand to increase the spray forming process capability to a tool base of 1.2 m x 1.2 m – large enough to press a car door – and to produce further tools for full industrial assessment.

The authors would like to thank the UK Engineering and Physical Sciences Research Council, and the Ford Motor Company, for financial support.

Patrick Grant is the Cookson Professor of Materials at the Department of Materials,Oxford University. His research interests concern the manufacture of new materials for industrial application, particularly in the aerospace and automotive sectors.

Stephen Duncan is a Reader in the Department of Engineering Science at Oxford University. His research focuses on the design and implementation of advanced control systems for industrial and manufacturing processes.

Built to Last- the Construction of Halley VI

The challenges of building a durable yet environmentally sound Antarctic station

Autism and Engineers - is there a connection?

Is autism more prevalent in engineers and, if so,why?