Professor Christofer Toumazou has achieved the rare distinction of being elected a Fellow of both the Royal Society and The Royal Academy of Engineering in the same year, 2008. These honours reflect the extensive impact he has had with diverse electronic innovations, ranging from dual-mode mobile phones to ultra-low power devices for medical diagnosis and therapy. His pioneering research has demonstrated how the natural analogue physics of silicon semiconductor technology can be used to replace and monitor biological functions, resulting in – among other achievements – the development of one of the world’s first totally implantable cochlear prosthetics. Professor Toumazou writes for Ingenia about his research and some of the current developments being undertaken by the Institute of Biomedical Engineering.

Electronic devices play an important part in medical diagnostics. It would be hard to imagine today’s hospitals without equipment such as electrocardiogram monitors, blood pressure monitors or ultrasound scanners. While these are all essential pieces of equipment, they are bulky and expensive. The next generation of medical devices will not only monitor and diagnose patients but will also help cure them. They will be small, portable devices and – like today’s pacemakers – even implantable in the human body.

Imagine a plaster that can continuously monitor your heart rate, body temperature, respiration and other vital signs. For diabetics, a tiny sensor implanted under the skin that continuously monitors blood-sugar and can warn the user of impending hypoglycaemia or hyperglycaemia. These are both examples of next-generation electronic devices that will dramatically improve patient care. They may sound like science fiction but devices such as these are in development all over the world and due to come to market in the next few years.

Eye of the needle

The development of these electronic devices would not be possible without disruptive advances in electronic design. Merely adapting and developing today’s microelectronic circuits for this application is not enough. Wireless body monitoring and implantation place huge demands on electronics design: the devices must be low-power and preferably working without the need for a battery; they must be bio-compatible; they must be able to handle a huge amount of information – and they must be small. In the case of implantation, the sensor must be small enough to fit through a needle for painless and quick implantation.

In order to solve these challenges, physicists and electronics engineers have gained inspiration from biology and chemistry.

Professor Toumazou led a major campaign to raise £22 million to fund the creation of the new Institute of Biomedical Engineering (IBE) at Imperial College London, which opened its state of the art, purpose-built facilities in 2006. By combining the strengths of Imperial College’s world-class research schools in engineering and medicine, the IBE is drawing together scientists, medical researchers, clinicians and engineers to drive major advances in key areas of medical diagnosis and treatment, including personalised healthcare, regenerative medicine and biomedical imaging.

Occupying four floors, there is space and facilities to integrate and consolidate the current activities within the field of biomedical engineering at Imperial College. There is laboratory space not only for researchers permanently attached to the IBE, but other staff from Imperial College, PhD scholars and visiting academics needing access to specialised facilities during specific projects. Amongst the laboratory facilities are specialised spaces for microscopy, image analysis, micropower testing, scanning probe, biotelemetry, instrumentation, third generation biomaterials processing, hierarchical materials characterisation and biophotonics. The IBE also incorporates a purpose-built bionanotechnology centre funded by the Department for Business Enterprise & Regulatory Reform.

The world is analogue but our electronic systems are digital. They use discrete quantities and manipulate them using Boolean logic. In the human space, however, we are entering a new wave of body-worn biosensor technology for medical diagnostics and therapy. This new trend is beginning to see the processing interface move back to continuous quantities that are more or less in line with biological processes. This paradigm of processing we label ‘bio-inspired’ because of the ability of silicon chip technology and the inherent physics of the device to now approach computational efficiencies of biology.

From a conceptual viewpoint this has led to a number of other morphologies such as neuromorphic processing (systems containing electronic analogue circuits that mimic neuro-biological architectures present in the nervous system) and retinomorphic processing (systems that use neurobiological principles to accomplish all four major operations performed by biological retinae). These processing paradigms have enabled researchers to model biological organs such as the cochlear, retina and the pancreas and gain a better understanding of biological and neurological processes.

By using ‘chemically-inspired’ circuitry, electronics engineers have been able to make portable, low-power microsystems capable of fast chemical/biochemical discrimination and interrogation of data at the sensor. This is fundamentally different from the way conventional sensors work. Most sensors today simply monitor a parameter and send the data to a computer for processing.

Next-generation devices will be able to perform complex analysis of data at the sensor. In contrast to the digital approach, where a single operation is performed by a series of switched on or off devices, chemically-inspired circuitry performs the same operation in an analogue way. This results in lower energy per unit computation and power efficiency is increased. 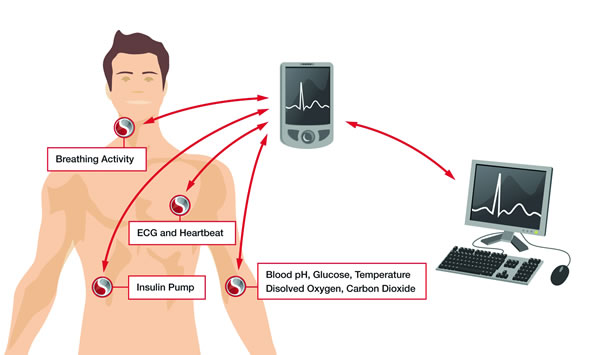 An example of a wireless healthcare monitoring system is something we’re developing at the moment, the Sensium digital plaster. This is an ultra low power system-on-chip technology platform that enables a new generation of low-cost, non-intrusive, body-worn wireless vital signs monitors for medical and professional healthcare applications.

Based on advanced mixed signal (AMx™)semiconductor chip technology (which mixes analogue and digital electronics in a novel way), the platform provides the complete wireless infrastructure to allow healthcare providers to remotely and intelligently monitor the human body in real-time, via standard mobile devices such as smartphones and personal digital assistants (PDAs).

Powered by thin, flexible batteries, and looking much like a plaster, the body-worn Sensium-enabled monitors can process and extract key features of the data and intelligently integrate it into an electronic medical record via a base station, using a power-optimised wireless operating and networking system (see figures 1 and 2). For healthcare professionals, this delivers possibilities for 24/7 monitoring and improved quality of care at reduced cost. Traditional healthcare models are simply not able to offer this level of continuous care except in expensive intensive care units.

One step on from simply monitoring vital signs is to integrate the sensor technology into a therapy regime. For example, an implanted glucose sensor monitors blood sugar levels, sends this information to an implanted insulin pump, which automatically dispenses the correct amount of insulin into the blood stream. This system is known as an artificial pancreas and is under development by several research groups and companies around the globe.

We, however, are developing one of the world’s first bionic (that is to say, biologically-inspired) pancreases based on modelling the actual physiology of the biological organ. A biologically-inspired silicon beta cell (see figure 4), responsible for insulin secretion in our body, has been developed to serve as the main building block of the artificial pancreas. It incorporates a novel glucose biosensor, a physiological control algorithm and insulin infusion pump.

Based on traditional electrophysiological models, this approach achieves dynamics comparable with those of biological beta cells by using CMOS-based electronic devices biased in the sub-threshold regime. Combined with a continuous blood glucose sensor and insulin pump, it will be able to maintain a more physiological profile of insulin release and has the potential to improve the lives of people with type 1 diabetes, lowering the risk of both complications and hypoglycaemia.

The optoelectronic retinal prosthesis research programme at the Institute of Biomedical Engineering (IBE) is developing a novel approach to interfacing electronics to the retina and is ultimately aimed at the restoration of vision for blind individuals with incurable retinal dystrophies.

By using novel gene therapy techniques scientists have shown how retinal ganglion cells can be made light sensitive, and by stimulating these cells optically, visual information can be relayed to the brain. The challenge arises because this scheme bypasses the many layers of dysfunctional retinal neurons (ie rods/cones, bipolar cells, horizontal and amacrine cells) and therefore a biologically-inspired vision processing technique is required to convert the incident image to the appropriate neural map.

Our team is developing an end-to-end platform, from the imager input, through to a bio-inspired processor and an optical stimulator in combination with techniques for photosensitising retinal ganglion cells to make this approach feasible.

Other examples of bio-inspired medical technology applied to healthcare include a cochlear prosthesis for restoration of hearing. The application of neuroprosthetics or neural engineering is already significantly improving the quality of life of deaf individuals, with the use of cochlear implants. The biologically-inspired cochlear prosthesis is based on a hybrid analogue/digital system-on-chip which significantly reduces the power consumption and size of a cochlear implant processor.

By modelling the basilar membrane and hair cells from the biological cochlear and implementing analogue circuits to mimic this functionality, a prosthetic device has been developed to bypass dysfunctional elements within the inner ear.

A microphone implanted within the ear canal provides acoustic signals to the prosthesis, which extracts frequency selective content in a similar fashion to the basilar membrane. These signals are then converted to the appropriate form to electrically stimulate undamaged neurons via an electrode array surgically implanted within the cochlear. The neurons then relay this stimulus via the auditory nerve to the brain, thus restoring the sensation of hearing.

At the Institute of Biomedical Engineering we are also looking at neural interfacing technologies. This work is particularly exciting as it offers the possibility of accessing completely new information about the operating of the neural system which has never been monitored before. The research looks into novel neural interfacing technologies employing multi-element microelectrodes and smart-ion sensing techniques. Initial application is targeted at vegas nerve interfacing, specifically for epilepsy, depression and appetite control.

Over the past few years, we have been using the physics of semiconductor technology to model the biological behaviour of retina, cochlear, neurons, beta-cells, etc, and provide intelligent, physiological semiconductor chips with almost the efficiency of the original biology. This has led to a new platform of local intelligent monitors and therapy and has enabled personalised interfaces with the human body in a non-obtrusive wireless and physiological way.

The intention with the deployment of this technology for real-time monitoring and intervention is the prevention of chronic disease patients being admitted to intensive care. Our future research projects are either based on applying state of the art engineering technologies to provide solutions for complex biological, physiological and medical problems such as prosthetics and diagnostics; or focused on deriving novel technologies based on the biological or physiological behaviour of complex systems, such as biometrics and smart sensors.

We believe the result of this investment and research means the healthcare outcomes of individuals and the financial health of the economy can only get better. It is interesting to note how biology has inspired technology which then solves major healthcare problems. This same paradigm is now being expored for other applications in both energy and the environment. Billions of years of evolution is now coming to the rescue.

The author would like to thank Nadya Anscombe and Dr Timothy Constandinou for their assistance in the preparation of this article.

Professor Christofer Toumazou is the executive director and founder of the Institute of Biomedical Engineering at Imperial College London. Current breakthrough research at the IBE includes the development of an artificial retina and pancreas in silicon using nanowatts of power. He also chairs a new Royal Society fund for blue-sky research.

A conversation with Dr Mo Ibrahim

Can forensic engineering help produce data that will change the way we think about knives as weapons?