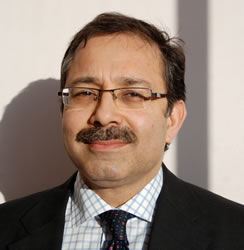 In January 2009, the UK government proposed a shortlist of schemes to harness renewable energy from the tides of the Severn Estuary. Five projects have been selected, with the preferred project to be announced in 2010. Halcrow’s Development Director Yaver Abidi, a specialist in hydroelectric power, feels that there should be a radical rethink in the way Britain selects and integrates its major power projects.

Exploiting the tidal power potential of the Severn Estuary (or not, as the case may be) is a decision for us all to make. But the way we are going about it reveals how unprepared we are as a nation to make the hard choices we need to.

In deciding whether, or how, to exploit the enormous tidal energy of the Severn, we have to address some profound issues: we have to consider the role and interventions of government in the UK power market; we must look at the balance between intangible global environmental benefits versus visible local loss of resource; and, perhaps most importantly, we have to decide whether we are willing to pay more for our electricity and become responsible custodians of our planet.

These three issues will re-emerge in many of the decisions about power generation we will need to make as a society. Whatever the decision on the Severn, these challenges will not go away.

While we are yet again looking at generating power from the Severn (this has been discussed since the 1920s), the circumstances today are quite different from any in the past. There is an urgency to get something done because many existing thermal power generation plants will come to the end of their life in the next few years and national carbon reduction targets loom ahead of us.

There are consequences too. Some of the schemes proposed for the Severn would lead to a loss of important intertidal habitat or interfere with shipping; others consume excessive resources or are too small to materially affect our national carbon emissions. Some, although enthusiastically promoted, seem to defy the laws of physics and the principles of engineering.

Our unpreparedness to address the big issues we face arises from taking what I would term tactical rather than strategic perspectives. We look at alternative forms of power generation and even individual power schemes on a case-by-case basis rather than as part of an overall system. We evaluate environmental impacts on a local or regional level when we should be looking at global impacts, too. We consider the cost of power supply now rather than addressing intergenerational impacts of consumption on the future. Changing to a strategic view has implications for government, for proponents and opponents of schemes and for the public at large.

In its current feasibility study of tidal power options in the Severn, the government hopes to first assess whether it should promote a power development in the Severn and then select a single preferred option based on a cost-benefit analysis. Is this really what the government should do and will this help make the best decisions?

Heretical though it may seem, I believe the government needs to study the implications of power from the Severn and other projects in a system-wide study. In the past, this would have been called a national power master plan. This should consider the capacity, reliability and availability of all existing and potential sources of power generation. It should look at different demand scenarios and seek to define the roles of various participants to achieve certain environmental objectives and service standards at a system level. Taking such a view will help answer some key questions: can wind alone meet our carbon targets or would some tidal help? What size of tidal scheme would best address our carbon targets? What and how much should the government do to enable the private sector to develop the right tidal project in the right place to meet our national goals?

The underlying implication of a strategic approach is that we can no longer look to a liberalised wholesale power market based on principles of economic efficiency to solve certain fundamental problems that arise from concerns about sustainability and climate change. This would be a big change. It hints at nationalisation and big government but, as recent events in the financial markets have shown, leadership and thoughtful intervention by the government is justifiable and necessary when a lightly regulated market doesn’t fulfil its purpose.

The second big implication of a strategic view of the Severn is that we need to find ways to pragmatically balance genuine environmental concerns regarding habitat loss and interruptions to the movement of fish with not just local benefits such as flood prevention and water quality improvements but with national benefits in the power system and global benefits in reducing carbon emissions. Today, both opponents and proponents argue vehemently from a narrow local perspective.

The final strategic issue raised by the Severn is that it signals that it’s time for us to pay more for a low-carbon future. Like many renewable schemes, its economics depend upon direct or implicit credits for lower carbon emissions. Like other renewables, it does not generate power at a constant level or in response to demand when we most need it. This creates a need for greater redundancy, standby capacity and storage in the system, all of which cost money. It will also require an expensive reshaping of the UK grid network and its cyclicality may create a case for greater integration with the European grid. The resulting increases in electricity prices need to be understood and accepted by the public who will need assurances that increases are not only in our collective best interest but that they are efficient and equitable.

Power development in the Severn is one of a handful of engineering undertakings that come along from time to time and fundamentally help to reshape industry, the political environment and everyday life for all of us. Regardless of whether we develop a tidal power project in the Severn, let’s seize the opportunity it offers us to prepare for the challenges of the 21st century by taking a strategic view of the issues.

Yaver is Group Development Director for the Halcrow Group. He trained as a civil engineer with a specialisation in soil mechanics. He has 27 years of experience working in North America, Europe, the Middle East, Asia and Africa. For roughly half of his career he has worked on the design and construction of hydroelectric power projects, dams and hydraulic structures.

A water bottle that can filter out microscopic viruses and chemicals to provide survivors in disaster areas with clean water.