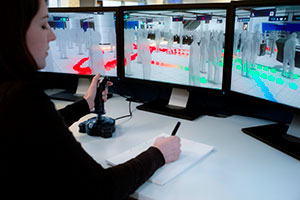 A report published in July by the Royal Academy of Engineering, the Economic and Social Research Council (ESRC) and Arup outlines some of the behavioural benefits gained from good design. The report, Built for living: Understanding behaviour and the built environment through engineering and design, focuses on fostering good health and well-being, bolstering performance and productivity as well as improving the stewardship of key resources such as energy and water.

The 68-page report is based on a series of three workshops and case studies. It includes the input of engineers, designers, architects, social scientists, behavioural researchers and government analysts. It suggests that, given a defined set of desirable behaviours within an environment, it may be possible to introduce, from early in the design process, the design characteristics that will help foster them.

Factors such as procedural knowledge, social norms and managerial structures will enhance the process. The report points out that a simple change, such as increasing the number of recycling bins in an office environment, in combination with featuring visual indicators for types of recyclable waste, can have a significant impact on recycling habits.

The clear link between design and productivity in manufacturing environments is also explored. The report endorses a multi-stakeholder approach, extending across the lifecycle of the built environment. To enable designers and engineers to capitalise on the existing knowledge base, Built for Living introduces a set of key principles to aid discussion, consideration and promotion of behaviours that will improve resource stewardship, health and wellbeing, and performance and productivity.

On 10 July, the Indian Space Agency successfully launched a rocket carrying five satellites from its Satish Dhawan Space Centre in Sriharikota. Among these are three Earth observation satellites for the UK-owned, Chinese-leased DMC3 constellation, plus a technology demonstration craft for Surrey Satellite Technology (SSTL) based in Guildford.

The DMC3 satellites were manufactured under contract to DMC (Disaster Monitoring Constellation) International Imaging, a subsidiary of SSTL. The satellites will be used for real-time, ground-level imaging for agricultural monitoring, urban planning, ecological cleanup and disaster relief. A cooperative contract for the DMC3/TripleSat Constellation was signed in London in 2011, and witnessed by UK Prime Minister David Cameron and China’s Premier, Wen Jiabao.

The satellites have been placed in an orbit 647km above Earth, spread 120° apart along a single orbital plane. Together, the satellites will observe up to a million square kilometres a day by pointing up to 45° off their ground tracks to image targets. The wide swath width of 23km provides the best combination of spatial resolution and time resolution for scenario modelling.

The other two satellites deployed with this launch are an 80kg platform known as CBNT-1, built by SSTL, to test technologies, such as avionics, that might be used on future satellites, and a 3kg cubesat, developed at the Surrey Space Centre. This cubesat will deploy a large membrane to test methods of removing space debris from orbit. It aims to use the sail as a kind of sea anchor, to create drag and slow down satellites using ‘aerodynamic drag’.

Dr Hugh Hunt, Cambridge University Reader in Mechanical Engineering, has been awarded the 2015 Royal Academy of Engineering Rooke Award for his outstanding contribution to the public promotion of engineering. Over the last 25 years, through direct education, and television and radio appearances, he has inspired a large number of people to engage with engineering and science. 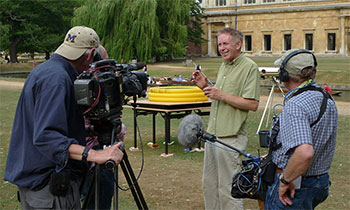 Dr Hunt lectures in engineering at the University of Cambridge, and outside of the university he gives popular science and maths lectures to a wide range of audiences. Through these activities, Dr Hunt has inspired thousands of people on topics as diverse as the science of music to the mechanics of gyroscopes and boomerangs. He has hosted the Institute of Physics School Teachers’ Update Courses in Cambridge, given talks at the Cheltenham Science Festival and he also makes regular appearances on the BBC’s One Show and on the popular Naked Scientists radio show.

Dr Hunt has also presented television documentaries with a strong engineering component which reach millions of people. He was the lead presenter and principal technical expert for Attack of the Zeppelins (2013), Escape from Colditz (2012) and Digging the Great Escape (2011). Dr Hunt and Windfall Films collected the 2011 Royal Television Society award for the best history programme for Dambusters: Building the Bouncing Bomb. All of these documentaries have been screened worldwide.

Dr Hunt said, on the announcement of the award, “I am an engineer, and problem-solving is in my DNA. Engineers simply relish a challenge, and the harder a problem is to solve, the better! Despite the fact that engineering has shaped our world, many people are unaware of its impact. My work is about raising awareness of engineering.”

The award is named after Sir Denis Rooke OM CBE FREng FRS, a former President of the Royal Academy of Engineering. Previous winners of the Rooke Award include broadcaster and engineer Professor Mark Miodownik FREng, computer science champion Professor Chris Bishop FREng FRSE, and Dr Diane Crann for her pivotal role in setting up Engineering Masterclasses at the Royal Institution. 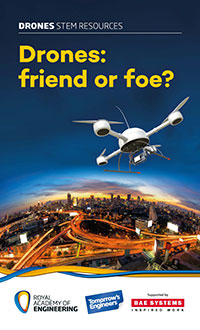 Front cover of one of the drone booklets

Over the past decade, the education team at the Royal Academy of Engineering has been producing resource boxes containing teaching and learning materials for secondary schools. These are designed to engage students with STEM subjects such as computing, design and technology, mathematics and science.

The latest, entitled Drones: friend or foe?, was developed and tested with the support of a team of STEM teachers from across the UK. Launched in September, it is aimed at secondary school students and designed to be used as a supplement to the curriculum, the focus of an activity day or as part of a STEM club, depending on the schools’ or students’ needs.

The new resource explores how drones work. It demonstrates how propellers create lift, how sensors are used to navigate their environment, and how drones use the electromagnetic spectrum and binary code to communicate with each other. It also asks pupils to discuss the ethical and legal impacts as well as the civil, humanitarian and commercial applications associated with the technology.

Two case studies are included in the resource to promote engineering careers. Sabine Hauert explains her work on swarm drones that were used as inspiration for nanoparticles used to improve cancer treatment, while Chris Chase of ASV Ltd talks about his work designing and making marine drones.

As part of the Connecting STEM Teachers project, the Academy will be distributing 500 copies of the resource, along with training and support materials, to STEM teachers in UK secondary schools during the 2015 autumn term and beyond.

The resources will also be available to download, along with all other resources produced by the education team, from the website http://tinyurl.com/njqv2yr

A-level students Laura Underhill, Lucy Davies and Ross Hooper, from Cynffig Comprehensive School, won an award for the ‘best application of mathematics’ at the South Wales Big Bang Fair in March 2015, for designing an efficient packaging system for the Raspberry Pi computer.

The Raspberry Pi is a low-cost, credit card-sized computer designed to engage young people with programming – see Ingenia 51. It is manufactured at Sony UK Technology Centre (UKTec) in Pencoed, where over 3 million have been made and sold worldwide since launching in 2012. As part of the Engineering Education Scheme in Wales, the students worked with Sony, Kevin Edwards, General Manager at UKTec, and teachers Richard Daniel (part of the Royal Academy of Engineering’s Connecting Teachers programme) and Daniel Morrish, to investigate ways of further reducing production costs. 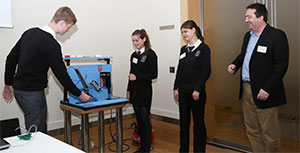 After analysing the manufacturing process, they decided to develop a solution to increase the automation of the packaging of the computer, a job that is usually done by hand. The challenge for the students was to get a Raspberry Pi from the production line and into the plastic bag used to package it.

The students’ response was to use suction and an electronic control system to pick up a bag, move it to the end of the production line and open it, ready to receive a Raspberry Pi. Once the computer is in the bag, the package is released and the process repeated. Although the students’ solution appears both elegant and simple, it was the culmination of several months’ work that involved physical, virtual and mathematical modelling. The major challenge, which the students solved using mathematics, was to design a valve that would give their system the suction it needed. The design is now being used in the production process.

John Milton is the director of the Archway Project, having previously worked with the Youth Justice Board and Prison Service. He explains what the charity does to help reduce anti-social behaviour and improve employment prospects.