Royal Mail has released a set of stamps that celebrate some of British engineering’s greatest innovations from the past 50 years.

The set includes three previous MacRobert Award winners. The award is the Royal Academy of Engineering’s prize for innovation in UK engineering, which celebrates its 50th anniversary this year. From the smallest of computers, the Raspberry Pi, to the three-way catalytic converter developed by Johnson Matthey, and Oxford Instruments’ superconducting magnets that enable MRI scanning, the UK has a long and proud history of engineering.

The set is completed by stamps of the Falkirk Wheel, the world’s only rotating boat lift, Crossrail’s monumental tunnel boring project, and the synthetic bone-graft material developed at Queen Mary, University of London by Dr Karin Hing, who won the Academy’s Silver Medal in 2011 for her work.

The Harrier Jump Jet appears in a miniature sheet of four stamps. Celebrating 50 years since it entered RAF service, the Harrier was the first operational jet fighter in the world to use revolutionary vertical short take-off and landing technology, powered by Rolls-Royce’s Pegasus engine, which was joint first winner of the MacRobert Award in 1969.

Philip Parker, Head of Stamp Strategy at Royal Mail, said: “British innovation in engineering is world renowned. This stamp issue proudly celebrates the projects and inventions which showcase this, as well as demonstrating the extraordinary range of disciplines that British engineers excel in.” In July, more than 3,000 participants from over 25 countries will take part in the Formula Student event at Silverstone.

Organised by the Institution of Mechanical Engineers, the event challenges university teams to design and build a single-seater car, which they drive in a series of races over three days at the Silverstone track. This year will also include an artificial intelligence (AI) competition, where teams will programme a prototype autonomous vehicle, as well purpose-built vehicles, to undertake a series of on- and off-track driving challenges.

Teams from 59 British universities are taking part, as well as entrants from across the world, including a first entry from Hong Kong.

Andrew Deakin, Chairman of Formula Student, said: “Around 1,000 university teams have been involved in our Formula Student competition in the 20 years since its launch, which equates to roughly 40,000 students from across the world. This year we are really excited to have teams competing in the new FS-AI competition. Formula Student has always been proud of the work it does to prepare students for the real world of industry and FS-AI will help us achieve that in the ever-expanding area of autonomous vehicles.”

Tickets for the event start at £10. To attend the race as a spectator, please visit www.silverstone.co.uk/events/formula-student

The Royal Academy of Engineering has announced long-term support for nine world-leading engineers to develop areas of emerging technology. The Chairs in Emerging Technologies will focus on advancing technologies that have the potential to bring significant economic and societal benefits to the UK.

Supported by the UK government’s National Productivity Investment Fund, the awards total over £20 million over the 10-year programme. The projects include next-generation cameras that can see round corners, human-centred robots that can adapt to an individual’s assistive needs and light-powered retinal implants that can restore people’s vision. The areas of research funded reflect the UK’s wider technological priorities, with many of the projects directly aligned to the government’s industrial strategy and designed to tackle some of the biggest industrial and societal challenges of our time.

Professor Dame Ann Dowling OM DBE FREng FRS, President of the Royal Academy of Engineering, said: “Engineering is critical to achieving the goals of the UK government’s industrial strategy, and investment in emerging technologies means that we can secure our footing in important future markets. For these technologies to reach their full potential it is important to invest in the pioneering individuals who advocate for them, as without their vision and foresight it is difficult to identify the products and services of tomorrow.”

To find out more about the chairs and their research, please visit www.raeng.org.uk/emerging-technologies 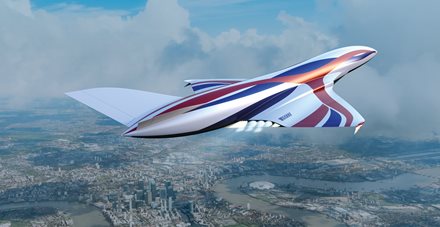 A UK-built hypersonic engine that could power a plane from London to Sydney in around four hours has passed its first demonstration test.

The SABRE engine, developed by UK company Reaction Engines, is the world’s first air-breathing part jet, part rocket engine, which relies on an innovative pre-cooler heat-exchanger technology. In March, this aspect of the engine was approved for testing, which recently took place at a test facility in Colorado, US.

The ground-based tests saw the pre-cooler successfully quench the 420°C intake airflow in less than 1/20th of a second. The temperature replicates thermal conditions corresponding to Mach 3.3 flight, or over three times the speed of sound. The tests are the first phase in an extensive test programme that will see the pre-cooler exposed to high-temperature airflow conditions of more than the 1,000°C expected during Mach 5 hypersonic flight.

The engine’s core recently went through a preliminary design review, which was signed off by the European Space Agency and UK Space Agency. Testing of this section will take place at Westcott Space Cluster in 2020.

As well as powering rapid, point-to-point transport inside the atmosphere, the engine would allow reusable vehicles to enter orbit without the need for multiple propellant stages, which is the case with conventional rockets. The engine could take them from standstill to just over five times the speed of sound and then transition to rocket mode at high altitude at 25 times the speed of sound to enter space.

Following the testing in the US, Mark Thomas, Chief Executive of Reaction Engines, said: “This provides an important validation of our heat exchanger and thermal management technology portfolio, which has application across emerging areas such as very high-speed flight, hybrid electric aviation and integrated vehicle thermal management.”

GET INVOLVED IN ENGINEERING

SUMMER EVENTS AT THE RI The Royal Institution (Ri) has launched a series of summer events that focus on engaging the public with STEM topics.

Running until the end of August, the series will features events based on three themes: Who am I?; Science in our lives; and Great moments in science. Talks include: ‘How batteries will change our lives’, a discussion about how adoption of battery transport will affect the built environment and how the automotive and transport sectors will have to change; ‘The conversation: a generalist AI’, which will explore how artificial intelligence will be intrinsic to a range of future technologies; and ‘Small steps and giant leaps’, a day of hands-on activities and demonstrations about space exploration that marks the 50th anniversary of the Moon landing.

The Ri has also announced its Summer Schools programme for young people aged 7 to 18. Its range of hands-on workshops brings to life all areas of STEM, from designing and building robots, making explosive bath bombs and creating electrical circuits that drive an electric train to making their own speakers, trying their hand at mathematical origami and exploring 3D engineering.

To find out more about the events and workshops or book a place, please visit www.rigb.org.uk 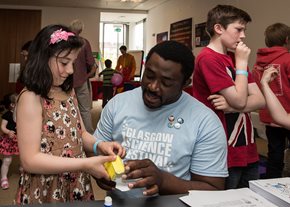 One of the UK’s largest science festivals, Glasgow Science Festival engages around 50,000 people in STEM through its June festival and community projects. Focused on the contributions of Glasgow and Glasgow-based researchers, the programme of events is suitable for all ages held at several locations across the city.

Visitors can attend an exhibition focused on the legacy of scientist, inventor and engineer James Watt, as part of celebrations marking 200 years since his death; listen to a talk about the achievements of women in engineering over the past 100 years; or enter a competition to be crowned ‘Creating Engineers Grand Champion’. It also includes two events supported by the Royal Academy of Engineering’s Ingenious scheme, Ingenious Circus, which explores the science and engineering behind the big top.

Held across three days, Lancashire Science Festival will host a raft of shows and workshops for schools and families, ranging from building an overengineered mousetrap and learning about the science of Star Wars to an introduction to engineer Isambard Kingdom Brunel.

The first two days of the festival will be open to primary school groups from Key Stage 2 while the third day will cater for the general public. The programme is free of charge to everyone on a first-come-first-served basis and the workshops can be pre-booked at a cost of £1 per person, which will be donated to charity.

UNTANGLING THE TRACKS AT THE LONDON TRANSPORT MUSEUM

The London Transport Museum has opened a new exhibition that explores the history of the Thameslink route. A display traces the route from 1866 up until the recent £7 billion engineering project to modernise it.

The display will include architectural models of Blackfriars station, which is the only station to span the river Thames. It has recently had an array of solar panels installed across its entire roof. Younger visitors can get hands-on with an untangle the tracks puzzle.

The exhibition also features the engineering behind the Borough viaduct, a 1,200-tonne, 72-metre bridge structure that gives Thameslink its own tracks into London Bridge station.

The exhibition runs from 24 May for a year. For more information, visit www.ltmuseum.co.uk