Cochlear implants and heart pacemakers have drastically improved the lives of many people with long-term health conditions. Professor Tim Denison looks at implantable medical devices and the engineering behind them as digital technologies and miniaturisation promise to deliver new therapies and help us to understand how the nervous system works.

Neurological disorders and related diseases of the nervous system create an estimated annual economic burden of over £100 billion in the UK, a cost that does not capture the personal impact of disease. When treating these disorders, doctors generally turn to pharmaceuticals but for some illnesses, bioelectronic systems are an effective alternative. They interact directly with the body’s own nervous system to monitor physiological signals and to control electrical activity to alleviate symptoms. Early examples of this approach have been cochlear implants to treat hearing loss and cardiac pacemakers to maintain a healthy heart rhythm. Engineers and clinicians are developing other bioelectronic applications including brain stimulators, cardiac and physiology monitors and spinal cord networks.

The most familiar device among the first generation of bioelectronic systems has been the cardiac pacemaker. In the early 1950s, the first pacemakers were relatively large portable systems that stimulated hearts after surgery. Around the same time in Minnesota, US, Dr Walt Lillehei performed reconstructive surgery on children with congenital heart defects. He used thermionic vacuum tubes to create a system that delivered electrical impulses to a wire electrode inserted into the right ventricle. This system, the size of a suitcase, relied on mains electricity that would fail in power cuts. In a bid to overcome such obstacles, Lillehei turned to his colleague, Earl Bakken, an electronics engineer, for help to develop a more reliable solution. Bakken adapted a two-transistor metronome circuit from a hobbyist magazine to create a battery-powered portable cardiac pacemaker that was easy to use. This first semiconductor device paved the way for other implanted electronic systems.

Over the past 50 years, the cardiac pacemaker has evolved to include multiple sensors for monitoring the patient’s heart rhythm, activity and breathing. The addition of embedded microprocessors made it possible to optimise pacing with algorithms tailored for each patient. The addition of wireless telemetry has further enabled clinicians to monitor patient symptoms and address issues remotely. 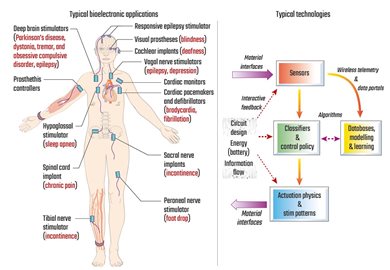 Engineers have overcome the original challenges, such as preventing damage by encapsulating the electronics, and designing an insulated lead wire that could withstand continuous bending – the heart contracts more than 30 million times a year. They have also reduced the size of the implanted device from a cricket ball to a small AA battery. Doctors can now place a pacemaker into the body it through a vein, in the same way that they insert stents into arteries.

Cochlear prostheses followed a similar trajectory to cardiac pacemakers. Some types of deafness arise when the small transducers, hair cells, in the inner ear can no longer convert acoustic energy into electrical impulses. Sound produces mechanical motion that usually creates currents in the cells that relay information to the brain, but damaged cells block the transmission.

The purpose of the cochlear implant is to take over from hair cells as the source of electronic impulses – see Cochlear implants.

Bioengineers have begun to adapt the same principles that cochlear implants use to bypass other damaged sensors in the body. For example, a retinal prosthesis can be applied to damaged photoreceptors in the eye. The prosthesis converts light detected over a region of the retina into currents that excite the eye’s remaining cells. Doctors now implant these systems in blind patients for diseases such as retinitis pigmentosa. The prostheses electrically stimulate surviving retinal neutrons, which the brain can then interpret as vision. The algorithms used for perfecting stimulation of the retina are also evolving as we learn more about sensory processing in the eye.

The success of cardiac pacemakers, cochlear, and now retinal prostheses has helped generate new implantable systems for treating disease that interact with many circuits in the nervous system. For example, ‘brain pacemakers’ routinely treat the symptoms of movement disorders such as Parkinson’s disease, essential tremor and dystonia. With a brain pacemaker, a surgeon routes an electrode to a specific area of the brain related to the disease. Pulses of electricity excite new rhythms that help to suppress its symptoms.

Other devices are used to treat epilepsy. Embedded amplifiers and implanted sensing electrodes can detect seizures and other bioelectrical waveforms. Using algorithms to interpret the brain’s signals, these devices then stimulate the brain to control the symptoms. These responsive implants for epilepsy were designed using similar principles to a cardiac defibrillator: to sense an emergent state, such as a cardiac arrhythmia or seizure, and then apply a burst of stimulation to try and stop it. Similar adaptive systems are now being explored to improve the treatment for Parkinson’s disease, Tourette syndrome and obsessive compulsive disorder, where different stimulation settings might be required to accommodate variations in medication or the patient’s environment.

Doctors can also to treat chronic pain by placing implants along the spinal cord, with stimulation electrodes positioned over the nerve area that is associated with the area of pain, taking advantage of the nervous system’s mapping in a way similar to a cochlear implant. Electrical stimulation in these areas modulates the activity in the nervous system to alleviate the perception of pain.

Descending further down the spinal cord to the area of the sacrum, similar methods can treat urinary and faecal incontinence by stimulating nerves that can influence the anal or bladder sphincter muscles. Stimulation of the sacral nerve builds on a long history of technologies for managing the bladder. These devices intercept and override signals in the reflex pathways of the bladder to help with maintaining continence. Researchers are working on further refining these techniques for the treatment of spinal cord injuries. While there is a simple explanation for how these therapies work, the true ‘mechanism of action’ often remains a mystery. Neuroscientists are working with engineers to study the basic science and to improve bioelectronic systems.

The evolution of cardiac pacemakers

To design a successful medical implant, engineers must solve multiple challenges, including creating suitable materials, battery technologies and electronics, and information security. The materials interface must not cause inflammation or harm the surrounding tissue. In addition, the body’s harsh biological environment – warm, salty and corrosive – must not damage implants that have to last more than a decade.

The implant’s energy requirements, hundreds of microwatts to milliwatts, needs new battery technology and management. Battery miniaturisation has already delivered improvements on this front. In terms of sensors and computation, the trends in microelectronics have also transferred to implantable systems. Most designs now use at least one microprocessor to manage the system, monitor and report on self-diagnostics such as electrode integrity, and in some cases, to adjust stimulation to optimise the treatment based on sensor measurements.

As systems become ‘smarter’, it is increasingly important to consider data privacy and device security. Managing these risks, a fundamental part of medical device design, depends on good design practices such as systematic analysis of failure modes and risk mitigations. The design of a medical system truly requires a multidisciplinary, systems-based approach.

In spite of their capability, implantable bioelectronic systems have several attributes that limit their adoption. One key issue is that implants require a skilled neurosurgeon to place the devices in the body. Engineers are constantly seeking ways to minimise invasiveness, while maintaining appropriate stimulation of the nervous system.

For example, healthcare professionals and engineers can apply more advanced non-invasive transcranial techniques that rely on external stimulation of the brain rather than implants to deliver therapy more deeply – either in the brain or to synchronise different regions of the brain. While non-invasive methods have the advantage of not requiring surgery, they are generally less specific at treating disease compared to an implant. In addition, patients can be put off by the need to wear a bulky appendage.

Technology is evolving on several fronts, from reducing invasiveness to using sensors and digital technology to providing better therapies. There is also a focus on microfabrication to create miniature versions of systems to minimise the invasiveness of implantable systems.

A brain pacemaker system – The schematic on the right, derived from an X-ray image, shows the implanted battery and electronic circuit placed in the chest. On the left, electrodes are routed through the neck and a hole in the skull, where a neurosurgeon has placed them into a specific location in the brain’s circuitry © Jane Fallows

For example, researchers are exploring the possibility of using a stent to insert brain implants. The device is routed through the vascular system to a targeted location in the head. Bioelectronic systems are having an impact, but engineers need to continue working with clinicians and neuroscientists to resolve technological and scientific issues so that these new techniques can become standard care.

Concepts from the Internet of Things are also influencing thinking on medical implants. Digital technologies can address various diseases using software modifications, as well as fine-tuning to a patient’s needs. In future, sensors and algorithms could lead to systems that respond to physiological fluctuations within the body, allowing the possibility of building restorative prosthetics that serve more like a surrogate nervous system than a simple implant.

Gaps in our understanding of how the nervous system works still limit the design of bioelectronic systems. To this end, bioelectronic platforms also open a window into the nervous system and how it works. As well as providing therapeutic capability, clinician-researchers can put scientific instruments inside devices to gather data on how the nervous system functions, goes awry due to disease or responds to drugs and stimulation. Engineers are working with human volunteers to meet clinical needs, including balance problems caused by Parkinson’s disease, predicting and preventing seizures in epilepsy, and emotional and sensory processing of chronic pain and depression. These experiments also help researchers to understand how to restore neurological function, and prototype future interventions.

Bioelectronic systems have changed how we treat neurological conditions. Engineers need to continue to work with clinicians and neuroscientists to resolve technological and scientific issues so that these systems can become the standard of care. As with most engineered systems, medical implants have conflicting constraints: the role of the engineer is to design systems that balance these trade-offs and provide different options for the clinician.

In the last half century, Biomedical engineering has made great progress in the treatment of neurological disorders. As electronics and computing develop, disciplines such as artificial intelligence, advanced materials processing and manufacturing, and battery technology will be integrated into new systems that will help to make further significant breakthroughs in the treatment of neurological diseases.

Tim Denison is a Royal Academy of Engineering Chair in Emerging Technologies at the University of Oxford, where he explores the fundamentals of closed-loop systems. Prior to this, Tim was Technical Fellow for the Restorative Therapies Group at Medtronic PLC, where he helped oversee the design of next-generation technologies for the treatment of neurological disease. He has a PhD from MIT in electrical engineering, and an MBA from the University of Chicago.

Bombardier won the 50th anniversary MacRobert Award for engineering innovation with its innovative composite carbon fibre wings for the Airbus A220.