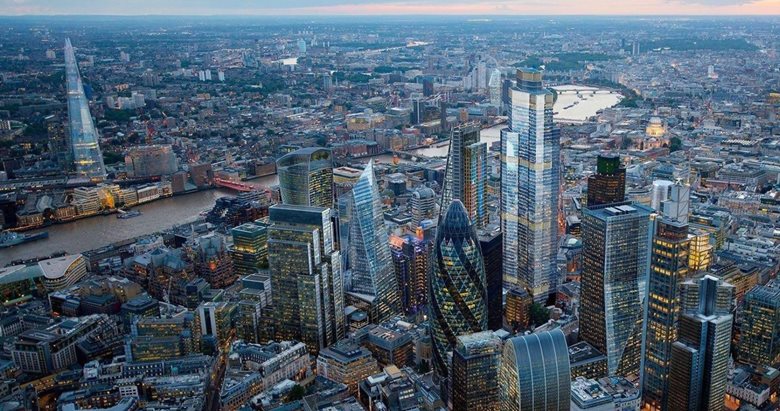 A render demonstrates how 22 Bishopsgate dominates the City of London’s earlier tall buildings, including 122 Leadenhall Street – The Cheesegrater – just to the building’s left, with The Shard across the River Thames to the south © 22 Bishopsgate

22 Bishopsgate is the tallest building in the City of London and the second tallest in western Europe. However, the most extraordinary feature of this new skyscraper is not its sheer size, but the ingenious structural engineering – or ‘structural gymnastics’ as the team describes it – that has enabled the remains of an earlier, failed development to be transformed into a large efficient modern office block. Hugh Ferguson talked to Peter Rogers CBE FREng, co-founder of the project’s developer Lipton Rogers Developments, about the building’s innovative engineering.

Modern high-rise work spaces in the City of London have led to a succession of instantly recognisable iconic structures with quirky nicknames – ‘The Gherkin’, ‘The Walkie-Talkie’ and ‘The Cheesegrater’. The tallest and most eye-catching of all was set to be ‘The Pinnacle’, a twisting, tapering tower, provisionally nicknamed The Helter Skelter. However, following the 2008 property crash, the investors pulled out and the project stopped. By then London’s deepest piles had been sunk, most of the three-storey basement had been built and the first seven stories of the building’s concrete core had been erected above. Efforts to revive the scheme came and went, and the desolate, abandoned concrete soon acquired a new nickname: ‘The Stump’.

Although widely admired as an architectural masterpiece, The Pinnacle had severe drawbacks. It was inefficient and expensive to build: its tapering, spiralling shape allowed little opportunity for repetition in construction with its highly complex engineering and irregular floor spaces. Also, post-2008 developers wanted efficient buildings, attractive to both businesses and their employees, which would help draw activity back into the City. A very different building was required, one that used the size and shape of the plot more efficiently, and was affordable to build.

The challenge was taken up by Lipton Rogers Developments (LRD), with its architect PLP, engineers WSP and contractor (as for The Pinnacle) Multiplex. LRD had jointly run an exercise with the City on how to construct high-rise buildings quicker and cheaper, and this was a chance to put the exercise into practice. The challenge was to create a building the same height as The Pinnacle, but with a third more lettable space, no more weight and at less cost. Columns along the west edge of the building slope inwards between levels six and three, with the huge horizontal forces countered by horizontal trusses connecting the columns to the concrete core © WSP

The basic design of the new 62-storey block, provisionally dubbed Twentytwo, is conventional by modern skyscraper standards: a large central concrete core holding the lifts, steel columns and beams around the periphery and concrete floors in between. The difficulty came at the bottom. The columns and core were not in the same place as The Pinnacle’s existing piles. Installing new piles would be expensive and would delay the start of construction by many months.

The core of the old stump had to go, but much of the existing basement and all the old piles could be re-used. This required a series of engineering measures to transfer the huge loads from the core and columns of the new building on to more than 300 existing piles – 25 mega-piles installed for The Pinnacle plus other smaller piles from previous developments –

using their bearing capacity to the full without overloading any. In the end, engineers only needed 85 new piles, most to lend support to the larger concrete core, and these were small enough to be sunk with a small piling rig that could fit inside a basement storey.

In many places, the transfer of load to the existing piles was achieved by installing massive beams within the basement area – effectively one-metre-thick reinforced concrete walls up to three storeys high. However, along the west side, the huge loads from the peripheral columns had to be brought in to the piles located much nearer to the central core. Engineers could do this by sloping the columns inwards from level six to level three, returning to vertical for the entrance lobby down to ground level, and then sloping again from ground to basement three. Sloping introduced massive horizontal forces that pushed outwards at the top of the sloping column and inwards at the bottom. To resist these, large steel Warren trusses (steel members arranged in a triangular grid) were installed in a horizontal plane just beneath the floor to connect the line of columns with the solid concrete core – a truss at the top of the sloping column to take the tension and another at the bottom to resist compression.

For one of the columns near a corner of the building, the truss solution would not work for the tension, so instead the top of the sloping column was anchored in to the core with an array of high-strength steel cables, sheathed and embedded in the concrete floor and then made tense.

Site constraints created other challenges. The old basement included two lorry lifts, which was the main means of access to the lower levels during construction and not easy to relocate, so the structure above had to bridge over it. Engineers designed a ‘mega truss’ to transfer the load from three of the main columns to the pile caps via columns either side of the lift. Elsewhere, basement space was needed for delivery or waste-collection lorries to turn, requiring one column to be removed. A massive 15 metre-long, 3.8 metre-deep, 97-tonne steel ‘mega girder’ was inserted just below the ground floor slab to transfer the load to points where there was sufficient pile capacity.

The north side of the new concrete core sits over the adequate foundations of the old core, but the south side required new piles and a new heavy concrete raft to be constructed first. The solution here was to adopt ‘top-down-bottom-up’ construction. A massive grillage of columns and beams was assembled in basements one and two to support up to 15 storeys of core above. This left basement three free for work to continue on the foundations beneath – with everything above supported on just four columns. As construction of the core proceeded faster than the foundations, the contractor asked if the grillage could support another six stories of core: this was achieved with additional strengthening and temporary columns, and by the time the core reached 21 storeys the new foundation was complete and the temporary grillage could be dismantled.

Sequence of ‘top-down-bottom-up’ construction for the south core, showing the additional strengthening measures to allow the core to be increased to level 20 before the foundations below were completed © WSP The concrete core containing lifts and providing the primary means of stability for the building, showing the two-storey high steel outriggers at levels 25 and 41 and vertical steel ‘belts’ embedded in the facade to limit sway. The core gets smaller nearer the top, as some of the lifts serve only lower floors © WSP

For wind loading, the design to avoid toppling is straightforward: the real challenges are to limit sway to levels that occupants do not find disturbing, and to avoid the ‘windy city’ effect of creating strong currents of air around the building, particularly near ground level. Engineers carried out extensive modelling and computer simulations, involving Formula 1 expertise in computational fluid dynamics.

The building itself and its concrete core are roughly rectangular and movement along the long edge was not an issue. To limit sway along the short edge, where the width of the concrete core is only 14 metres and the orientation causes greater wind loads, double-storey outrigger steel trusses were installed at levels 25 and 41 between the core walls and the periphery, where they were connected to the columns.

Concrete shrinkage, compression of concrete and steel under load, and settlement of piles all lead to significant movement in such a tall, heavy building. Movement differs significantly between the concrete core and the peripheral steel columns: 60 millimetres in total for the concrete and 200 millimetres for columns where the stresses are greater. This movement was anticipated and dimensions adjusted accordingly, but it meant that bolts connecting the outriggers to the structure could not be tightened until after the building had been ‘topped out’ in May 2019.

Meanwhile near ground level, the complex array of baffles developed through modelling and computer simulation to create a wind-free environment have been neatly integrated with artwork, so that they appear creative rather than merely functional. LRD’s vision for 22 Bishopsgate was to create a community rather than a collection of standalone tenancies – a ‘vertical village’ of some 13,000 people – and most of the design features of the building stem from this vision: higher ceilings and full-height glazing for natural light; hassle-free entry and lifts; common amenities, such as London’s largest bicycle park in the basement, plus a communal food hall, an external terrace, a business club, a wellness centre and gym, a relaxation zone and an innovation hub, to help improve work/life balance; flexibility for tenants to create their own space and to allow for future changes of use; and a state-of-the-art technological backbone that is a first for a new building in the UK [see A Smart building].

Peter Rogers CBE FREng is Co-Founder of Lipton Rogers Developments. He is an engineer and property developer specialising in delivering complex building projects, working with government and industry to improve environmental and working practices in construction He was awarded a CBE for services to construction in 2007, is a Fellow of the Royal Academy of Engineering and the Royal Society of Arts, and an Honorary Fellow of the Royal Institute of British Architects.

Hugh Ferguson also talked to Paul Hargreaves and Danny Hall of LRP, and to Ross Harvey and Richard Brailsford of multidiscipline engineers WSP.

Bombardier won the 50th anniversary MacRobert Award for engineering innovation with its innovative composite carbon fibre wings for the Airbus A220.