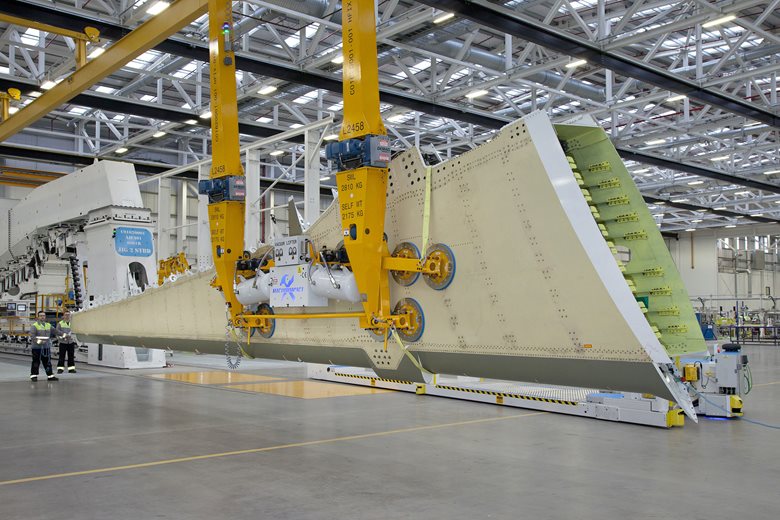 When the Airbus A220 took to the air, it flew with the first certified commercial aircraft wing made using resin transfer infusion. The composite, carbon fibre wing is 10% lighter than a metal one, which reduces its environmental impact by consuming less fuel while flying and requiring less energy for its manufacture. These achievements won Bombardier the 50th anniversary MacRobert Award for engineering innovation. Michael Kenward OBE talked to Professor Ric Parker CBE FREng, a special advisor on technology and technology transfer and MacRobert Award judge.

Truly revolutionary advanced innovations in materials technology do not come along every day. Bombardier’s composite aircraft wing is a rare example of a leap forward in materials and manufacturing engineering that has changed how this industry works. It underpins the success of the Airbus A220, which made its maiden flight in September 2013 and entered service in July 2016 as the Bombardier C Series. The plane was made to fit into the 100- to 150-seat market, which has increased in the last decade and Airbus has picked up a significant proportion of the new sales in this area. This is due in no small measure to its composite wing, with attendant reduction in assembly line costs and improved lifecycle maintenance savings.

The MacRobert Award, a rare accolade for materials and manufacturing innovation, was awarded to Bombardier for the patented resin transfer infusion (RTI) process used to make the wings. The patent protection covers the RTI process and the tooling needed to make it happen. Before this innovation, only small-scale pieces could be made by resin infusion. The Bombardier wings represent a huge jump in application as the largest and most complex structure designed using this technology.

Bombardier’s Belfast operation had been researching and developing composites since the 1970s. It was involved in the Next Generation Composite Wing project, a government-backed three-year programme, launched in 2008, which brought together leading aerospace companies in a £103 million research and development initiative that helped to put the UK at the forefront of the use of composites in aircraft.

Composites had already been making steady inroads into aerospace. Most composites that go into today’s aircraft programmes start with a material that arrives as a tape pre-impregnated with resin (pre-preg). This relies on curing the material under high temperature and pressure, usually in an autoclave, to bind the fibres together to create a hard and durable structure. The pre-preg material used by other large airplane manufacturers has to be stored in a deep freeze and material is wasted if left at room temperature for too long. 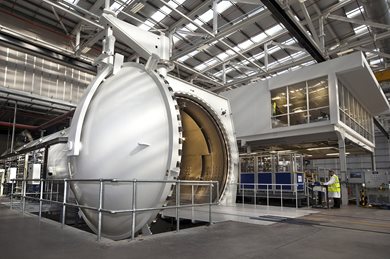 Bombardier decided to use ‘dry’ fabrics placed in moulds to create the structure. Liquid resin is then injected into the structure before heat and pressure are used to cure the composite in the autoclave. It soon became clear that this RTI process created new possibilities. It meant that large complex structures could be manufactured as single pieces, which in turn reduced the need to make many different parts that have to be assembled with mechanical fasteners or glued together after production. This approach offered significant material savings and reduced manufacturing times.

Bombardier decided to create a composite wing as part of a development project for the Bombardier C Series of narrow-body, twin-engine, medium-range jet airliners. The CS100, (now known as the Airbus A220-100), required a 35-metre wing for its planes that would carry between 100 to 150 passengers.

Introducing a new material into something as safety-critical as aerospace needs extensive research to prove that the design, manufacturing and assembly can deliver safe and reliable components that meet all the stringent certification requirements for any new aircraft. This process involved a research and development programme that entailed thousands of individual material and component tests. The development programme also included producing a full-scale, three-quarter span, pre-production wing. This was tested to ultimate load, replicating 150% of the most severe forces that the wing is likely to experience in service. The data collected from all the tests then fed into optimising the design of the production wings.

One of the major challenges in wing design is coping with lightning strikes. A carbon fibre structure is less conductive than aluminium, so engineers needed to address a number of challenges to receive certification, not least because it was a brand-new design. Punctures at fuel-tank boundaries and arcing from fasteners, interfaces and system installations can be prevented by designing appropriate electrical pathways and ensuring there are no gaps that create sparks. To do this, Bombardier has developed and patented high-resistance components and support brackets, which were validated through 3D computational electromagnetic modelling.

Engineering new materials, and ways to work with them, is just a part of the innovation process. Engineers also have to devise new processes and approaches to manufacturing. Most commercial aircraft wings are made of aluminium alloy. They have a large number of individual parts manufactured from pieces of plate, extrusion, forgings or sheet material. These metal parts are machined and formed to the required shape. These individual parts are then put together with rivets and bolts to create the wings.

Complex fabrication and assembly processes used for turning sheets of metal into wings are no help when you want to take deliveries of fabric at one end of the production line and deliver whole wings at the other end. Bombardier set up a production and assembly line in a new 56,000 square metre facility in Belfast which was opened in 2010. This £520 million investment in the aircraft wing programme is the largest-ever, single inward investment in Northern Ireland, and one of the largest in the UK.

Under one roof it receives raw carbon-fibre material, and then handles cutting and lay-up. There then follows the RTI production system, non-destructive testing, wing assembly and testing, through to delivery of completed wings. 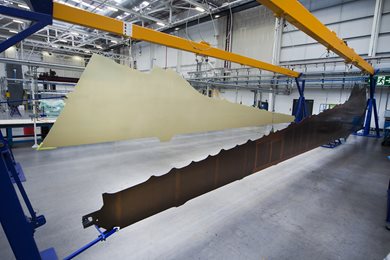 The impact of Bombardier’s expertise in advanced composite components goes beyond developing and supplying wings for the Airbus A220. The company’s portfolio of composites runs to around 30 components, including nacelles (a housing that holds engines, fuel or equipment), landing gear doors, and flight control surfaces, such as flaps, ailerons, elevators and rudders. RTI composites are also used in the horizontal stabiliser for the Bombardier Global 7500 business jet.

In addition, the Belfast operation uses the process to make fan-cowl doors for the supplemental type certificate repair market – issued when Federal Aviation Administration approval has been given to modify an aeronautical product from its original design. This involves replacing the honeycomb interior of fan-cowls with a monolithic structure, resulting in a one piece, lighter and more durable component.

Overall, the new wings have been a great success for Bombardier, their sales helping deliver the first company profit for five years in 2018. The company delivered more than 25 wing sets in 2018, and this is expected to increase significantly in 2019.

The Belfast facility also taps into around 200 suppliers across the UK that provide materials, systems hardware, parts, equipment and services for the wing programme, with many more throughout the whole supply chain. Bombardier’s own workforce on this wing programme will include 1,000 people at peak production and thousands more in its wider supply chain.

Bombardier’s trailblazing in the development of composites for aerospace applications has paid off both financially and with the engineering peer recognition provided by this latest award. Michael Ryan CBE FREng, Aerostructures Chief Operating Officer at Bombardier Aviation, said: “We’ve been developing our advanced composite expertise in Belfast for half a century now and it’s an immense honour to receive the gold medal in the MacRobert Award’s 50th year.” 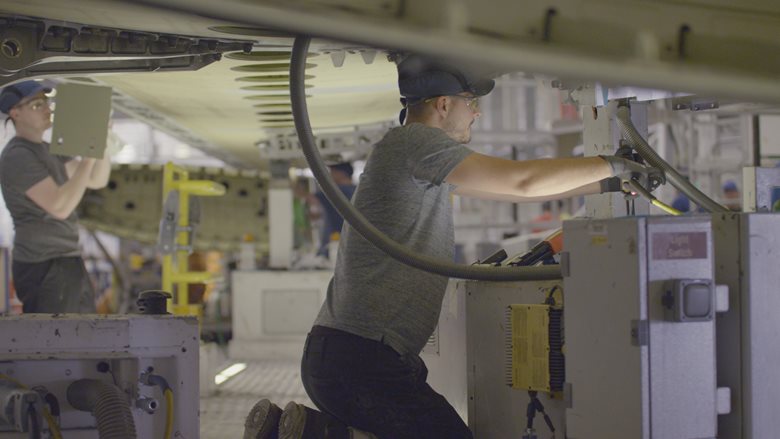 22 Bishopsgate was built on the basement of an earlier failed development. The result is the tallest building in the City of London.