Used every day by millions of people across the world, electric kettles use a surprisingly simple method to overcome a long-standing problem: how to switch themselves off.

When a kettle is plugged into an electric outlet and switched on the electric current flows through a metal coil, which is situated either within or under the water. The coil is, in effect, a heating element and its resistance (the material’s efforts to stop electricity flowing through it) turns the electrical energy into heat.

Because a kettle is a sealed unit, the temperature rises quickly within and pretty soon the water boils. So far, so simple. The main problem with the electrical kettle concept has always been how to enable it to switch itself off. In the past they didn’t and many a hotel was evacuated when a left kettle boiled and boiled and set off the room’s smoke detectors.

Now, all electric kettles have an automatic shut-off that stops heating the water when they reach boiling point. 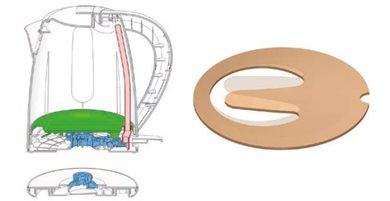 (left) The green area shows the heating element, when the water boils, steam travels down the steam tube (in red), actuating the bimetallic disc (right) in the blue safety control that disconnects the power supply © Strix Ltd

Many of the devices that make this happen are based on an invention by a UK engineer, John Crawshaw Taylor OBE FREng. The problem he faced is that a simple thermostat won’t achieve the best result and ensure that the water has fully boiled.

The boiling point of water changes depending on altitude or the amount of impurities in the water, so a thermostat that stops boiling the water at exactly 100°C presents a problem. At sea level, water boils at 100°C, but for every 150-metre increase in elevation, water’s boiling point lowers by approximately 0.5°C. If you fancied a cup of tea on the shores of the Dead Sea your kettle would cut off before the water reached boiling point, whereas if you fancied your brew on the top of a mountain, your kettle would never cut off and would boil all the water away.

The ingeniously simple solution to the problem comes in the form of a two-layer bimetallic (a metal with two different thermal expansions) disk that ‘flips’ at a specific temperature, similar to a metal jam-pot lid that ‘pops’ out when you open a new jam pot.

The larger-thermal-expansion disk is bonded to a smaller-thermal-expansion one, so that as the temperature rises the combined disk curves so that the faster expanding disk is on the outside, and vice versa as it cools. The cleaver shape of the disk provides a cheap and effective thermostat that snaps suddenly at a certain temperature rather than just bending slowly as it heated.

Another clever feature is that the thermostat is not in the kettle water at all and thus is not tripped by the water temperature, which as established earlier, may not always be 100°C. Instead, it is outside the water and is tripped by a rapid temperature rise induced by the steam that is produced only when the kettle boils.

A channel within the kettle, typically inside the handle, carries steam from the top of the boiling interior down to the thermostat (often near the base), where the temperature rises very rapidly from around ambient to near 100°C as soon as boiling starts. This causes the disk to snap and disconnects the power. The thermostat can now be set to trip whenever the water boils, even if this occurs at different temperatures. If, after the kettle has finished, you listen for a while as it cools you may hear the disk flipping back.

22 Bishopsgate was built on the basement of an earlier failed development. The result is the tallest building in the City of London.