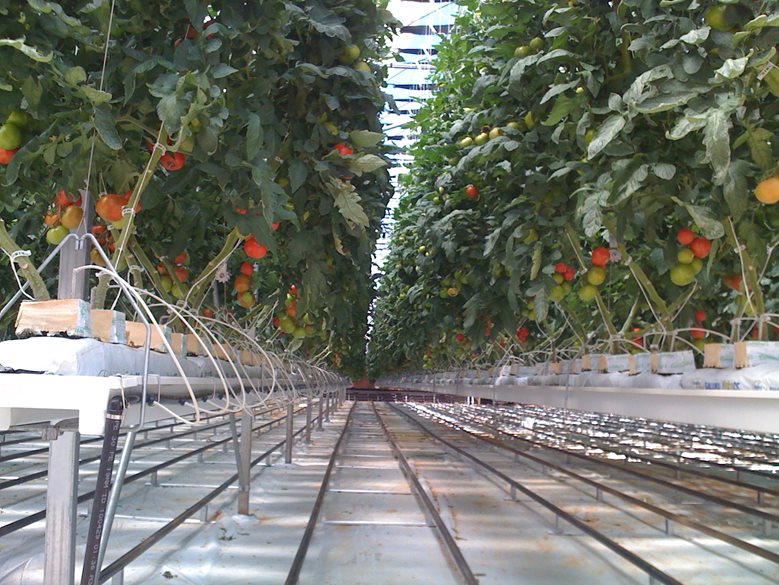 Growing crops in hot, dry countries can be a challenge. Simple structures that use seawater to keep the growing environment cool are being used to farm fruit and vegetables in the Horn of Africa. Geoff Watts spoke to Charlie Paton, Founder and Director of Seawater Greenhouse, about the challenges of creating a greenhouse that cools instead of heats.

Greenhouses exist to create a warm environment for nurturing plants that would otherwise grow slowly or not at all. So with summer temperatures in excess of 40oC, and warmth hardly in short supply, the arid coastal region of Somaliland in the Horn of Africa is the last place you would expect to see a huge greenhouse.

Some 15 kilometres along the windy coast from the port town of Berbera, you can find two enclosed grow-houses. Unusually, these ‘greenhouses’ are not designed to provide a warmer environment, but a cooler and more humid one than the hot and dry surrounding air. While the local plant life is little more than small scrubby bushes, these coolhouses support a thriving crop of tomatoes.

Designed and built by a UK company called Seawater Greenhouse Ltd, the structures themselves could hardly be simpler. Charlie Paton, founder and director of the company, worked for many years as a theatre and TV lighting designer, where he developed remote controlled and motorised lighting systems. A combination of holidays in hot and sunny Morocco, and years of thinking professionally about colour and the composition and filtration of light led him to contemplate the paradox of plant growth.

Sunshine comprises visible light and infrared heat. More light leads to more plant growth through more photosynthesis, but too much heat drives water loss through transpiration and, in extremes, reduces growth. It was from these musings that the idea of a new type of growing environment emerged: one that excluded much of the unhelpful infrared in sunshine, while using wind and sun to power a system of evaporative cooling.

The first of several pilot projects was launched in the early 1990s with the construction of a coolhouse in Tenerife. Having satisfied themselves that they had proof of principle, Paton’s team moved on to the hotter and more arid environments of Abu Dhabi and Oman, the latter in collaboration with Sultan Qaboos University. ‘Greenhouses’ in both locations experimented with the use of metal support structures. In Abu Dhabi, the company used supports that were similar to the metal frames found in polytunnels. The Oman coolhouse experimented with shade nets. The first commercially viable and much larger group of coolhouses were installed at Port Augusta in Australia in 2010. An investor commissioned Seawater Greenhouse to set up the project with a view to growing tomatoes. It began as a 2,000 metre squared pilot structure and now, under the ownership of a local company Sundrop Farms, it covers 20 hectares. In addition to the seawater evaporation technology it can also function as a regular greenhouse, which requires energy. This comes in the form of solar power accumulated by an array of 11,000 stands each supporting three mirrors that focus the Sun’s rays on to a solar collector mounted at the top of a 100-metre tower. The system has a peak generating capacity of 39 MW. Tomato production is in the region of 15,000 tonnes annually.

Port Augusta is a high-tech project. But far from marking the culmination of Paton’s interest in seawater greenhouse technology, this powerful demonstration of its potential led to a radically simpler form, suitable for societies that lack the resources of a country like Australia. The Somaililand project, supported in the beginning by a grant from Innovate UK, was built in collaboration with an NGO, the Pastoral and Environmental Network in the Horn of Africa. This coolhouse had to be cheap, rugged and suitable for a smallholding farmer.

Charlie Paton describes the revised structures as “basically a Bedouin tent covering a thousand square metres with a soggy wall of cardboard at either end.” Besides an unlimited supply of wind and sunshine, the clue to their other principal requirement lies in the company’s name: seawater. The invention relies on a familiar principle – evaporative cooling – but here it is applied in a context where fresh water is scarce and wind and seawater are abundant. 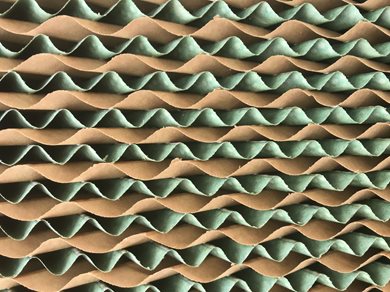 The “soggy walls of cardboard” are actually evaporator panels designed for use in air conditioning systems. Each panel is a pad made up of layers of cardboard that is corrugated with a pitch of 7 millimetres between its trough and peak. The layers are stuck together so that the corrugations in alternate layers run at different angles. This crisscross configuration means that air entering the filter rapidly becomes highly turbulent.

The cardboard panels form permeable walls, one at either end of the structure. Each wall provides a large area for evaporating the seawater that trickles down it. Wind blowing through the panels enters the grow-house both cooled and humidified. Paton’s premise is that when cultivating crops in hot, arid regions, humidifying the air has at least the same value as conventional irrigation.

Seawater that remains unevaporated following its downward journey collects in a trough beneath the cooling panels before being pumped back to the top. The whole structure is positioned so that one of its end walls faces the direction of the prevailing wind. If the wind changes direction from onshore to offshore – as, typically, it will at night – the filter at the opposite end of the building will take over cooling duties. Solar power provides the relatively small amount of energy required to pump seawater from the nearby ocean.

Before construction began, Seawater Greenhouse enlisted the help of the School of Engineering and Applied Science at Aston University, Birmingham to predict the likely temperature and humidity inside the greenhouse. To do this, researchers devised a model that took account of ambient humidity and temperature and its fluctuations, wind speed, intensity of solar radiation, optical and physical properties of the shade nets, rate of airflow through the cooling pads, rate of consequent water evaporation, and much else.

The team’s model suggested that a wind speed of as little as 3 m/s would be enough for satisfactory cooling. They found that the evaporative cooling pad would provide a horizontal plume of cold air across the crop cultivation area. This plume would persist for some 10 metres downstream of the cooling pad, and reduce peak season temperatures by up to 10°C. The moisture content of the air in this plume would be increased by 6–9 g/m3. Beyond 15 metres downstream, the plume would largely dissipate. Although the shade-net by itself would not provide effective cooling, it would help to contain the cold air plume; without it the useful length of the plume would be roughly halved.

Overall the Aston modelling suggested that if the coolhouses were correctly orientated with respect to the prevailing wind, each square metre of the surface of their cooling pads should release 33.4 cubic metres of water vapour to their interior, and generate 2.34 tonnes of salt annually. The greenhouses have, it seems, lived up to these predictions.

Sunlight is necessary for plant growth, but this greenhouse uses no glass or any other material that would create a literal ‘greenhouse effect’ within its interior. Instead its sides and roof are formed of shade netting designed to reduce the heating effect of the Sun by reflecting much of its infrared component. More than enough visible light gets through to drive the plants’ photosynthesis.

If this all sounds extraordinarily simple, it is – and that’s the point. Somaliland is a poor country with few resources. Anything much more elaborate would price itself out of reach.

Only 1.8% of Somaliland is cultivated, and there are few arable crops. Its coast has a year long prevailing wind of around 20 metres per second and an air temperature that reaches 40oC in the summer and seldom falls below 20oC. The two coolhouses on the site measure 30 metres square, made of a roof and side walls of shade netting (with a hole diameter of 3 millimetres and an optical porosity of 50%) supported by wooden poles. The entire width of the coolhouse, at both ends and up to the roof, is filled by the evaporator panels. These stand on low wooden supports beneath which a trough collects the unevaporated salt water that has trickled down the panels. Electric pumps return this water to the tops of the panels. 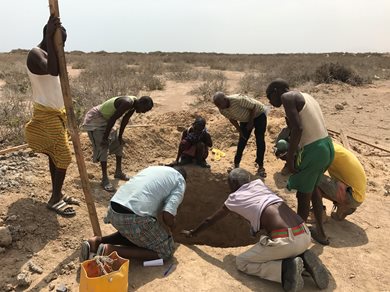 Beach wells, 200 metres from the beach, use sand to clean and filter water before it is pumped to the grow-house © Seawater Greenhouse Ltd

This recycling means that the seawater becomes concentrated to the point at which salt begins to precipitate out of solution. This tends to begin in the sump tank used to collect the water from the troughs before it is recycled. In practice a fresh batch of seawater is required once a day, and is pumped on to the site direct from the ocean. The concentrated brine it replaces is run off into evaporating trays from which salt crystals can be recovered, dried, bagged and sold.

Calcium dissolved in seawater also tends to precipitate out on the cardboard surfaces of the evaporator panels, forming deposits resembling limescale. This has proved to be beneficial because it turns the cardboard into a firm coral-like structure.

Plant transpiration inside the coolhouse is a fraction of what it would be outside. The small quantity of fresh water required by the crops is supplied by desalination of seawater using reverse osmosis. Power for this, for the pumps, and everything else electrical on the site, is provided by a 10 kW array of solar panels connected to lead-acid batteries. The project is self-sufficient in energy.

Intriguingly, the benefits of a seawater greenhouse are not confined to the area within it. Once up and running it produces what Paton calls an oasis effect. Cooler and more humid air leaking from the

sides of the greenhouse create a local microclimate above the ground surrounding it. This is sufficient to support the growth of melons, citrus trees and various herbs.

Seawater is pumped into the cardboard walls, evaporating and cooling the air inside the building. The surrounding areas are cooled by the air that leaks from the structures, providing the perfect environment for growing crops like melons and citrus fruit © Seawater Greenhouse Ltd

The Somaliland greenhouse can produce 300 to 750 tonnes of tomatoes per hectare. This, and the salt (which contributes some 10% to the profit of the enterprise), make it commercially viable – or would do if the region were politically more stable. As it is, the project has to employ three armed guards at a price that absorbs much of the scheme’s profit. So how does Paton rate the likelihood of other greenhouses appearing along the region’s coast? Right now, he’s not optimistic. The technology in this cheap and simple form undoubtedly works, but he sees no imminent sign of the political will that would be required to get more projects like it off the ground.

At a cost of $400 million, 2,000 hectares of seawater greenhouses could give the four million people of Somaliland the daily 400 grams of fruit and vegetables that the World Health Organization estimates to be the minimum requirement for health. What a bargain!

Charlie Paton is Founder and Director of Seawater Greenhouse. He studied at the Central School of Art and Design in London and began his career as a lighting designer and maker of special effects. His fascination with light and plant growth led to the Seawater Greenhouse concept. Charlie was recognised as a Royal Designer for Industry by the Royal Society of Arts, Manufactures and Commerce.

How I got here - Natalie Cheung

The film I, Robot, inspired Natalie Cheung to consider engineering as a career. She has gone on to work on several big railway projects.