HOW DOES THAT WORK? - Peltier devices

Thermoelectric heaters and coolers are widespread – from the cooling of the CCD (Charge-Coupled Device) image sensors in telescopes and cameras to reduce thermal noise to the camping fridge that can be run from a car battery. A discovery by French physicist, Jean Charles Peltier, was crucial for enabling these devices. The Peltier effect is a temperature difference created by applying a voltage between two electrodes connected to a sample of semiconductor material. This phenomenon can be useful when it is necessary to transfer heat from one medium to another on a small scale. 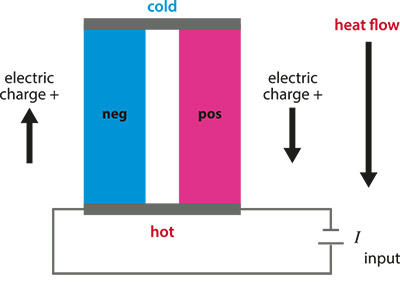 In recent years, the efficiency of Peltier coolers has improved considerably by inserting a layer of the semiconductor bismuth telluride between two aluminium plates. Most thermoelectric modules now use bismuth telluride, doped to obtain positive and negative semi-conducting properties, to achieve optimum heat pumping performance. Conventional refrigerators compress and expand a low boiling point fluid to achieve cooling, however, ones using the Peltier effect, although less efficient, have no moving parts or gases to leak.

Peltier devices in spacecraft and satellites absorb the heat of direct sunlight and then dissipate it from the shaded side. Peltier coolers can also be used to remove heat from vital parts within a PC without the danger of liquids damaging the electronics. The Peltier device is clamped to the top of the main processor to extract heat away from the billions of transistors beneath it. Other uses include dehumidifiers and sensors to measure the heat flow through walls of buildings.

Ingenia would like to thank Richard Walder for his help in choosing and describing this How does that work?

Endomag’s Chief Executive Dr Eric Mayes outlines some of the challenges that surround the development and acceptance of medical innovations.

Coventry company Lontra has had a busy year.

Richard Gray, freelance technology writer, asked Göran Grunditz, Manager of the Rolls-Royce Hydrodynamics Research Centre, about challenges when reducing noise for passengers onboard ship and for military vessels that seek to avoid detection.