Coventry company Lontra has had a busy year. It began 2015 by winning best Energy Product/Service at the Environment and Energy Awards and finished it by announcing a knowledge-sharing agreement with Shield Group Engineering to manufacture an industrial compressor based on its design.

Ten years ago, Lontra CEO Steve Lindsey patented a clean sheet design for a compressor. Lindsey’s Blade Compressor® is an oil-free, compact, double-acting rotary compressor, the key feature of which is a rotating blade that passes through a slot in a rotating disc on each revolution. Its geometry gives internal compression with very low leakage and low inlet and outlet flow losses. This allows a wide range of efficient operation and for the compressor to be directly coupled to a standard industrial motor, rather than requiring a gearbox or belt drive. The resulting double-acting rotary compressor operates with more than 20% greater efficiency, compared to previous designs.

Its initial market has been in the water industry, where cleaning waste water by aeration accounts for more than 1% of the UK’s total energy consumption. A pilot installation of the compressor, carried out in partnership with Severn Trent Water and with support from the Carbon Trust, saw a 3% reduction in the firm’s total carbon emissions after a year’s operation at its Worcester Sewage Treatment Works. Its reliability offers further reductions in running costs across energy-intensive industries such as water aeration and pneumatic conveying. Now, Welsh Water has signed up to use it. 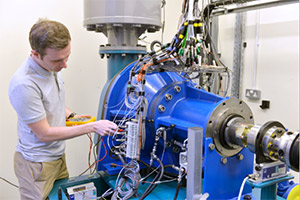 Lontra, which employs 20 at its research and development base near Coventry, is pursuing a licensing model to achieve scale in the global market. The first licensee of the Lontra design is Swiss multinational Sulzer. In a £600 million agreement, Sulzer will use the compressor in the municipal and regulated waste water treatment sector. Other possible markets for this technology include pharmaceuticals, fish farming, and process industries such as cement and carbon black.

The design has the potential to produce air in the range of pressures required by industry, typically 7–10 Bar. Lontra has received financial support from Innovate UK and the Institution of Mechanical Engineers’ Stephenson Fund, among others. The multi-million pound funding will go toward further research and development of the double-acting rotary compressor.

Professor Anthony Bull FREng, explains how a multidisciplinary team is helping protect, treat and rehabilitate people who are exposed to explosive forces.

Professor Brian Ellison, the UK ALMA project manager, describes some of the challenges that had to be overcome during its construction.

Richard Gray, freelance technology writer, asked Göran Grunditz, Manager of the Rolls-Royce Hydrodynamics Research Centre, about challenges when reducing noise for passengers onboard ship and for military vessels that seek to avoid detection.