Invented in the 1920s, the electric hairdryer is an everyday household object that has changed significantly over the past century – and is likely to continue developing as technology evolves. Its production consists of various engineering elements.

Most households probably have an electric hairdryer – a handheld device that we use to dry and style our hair. The small device uses various engineering elements to heat and blow air. Engineers must consider: electrical power consumption; materials for heating and cooling; the design, consumer appeal, structure, durability and weight; and the electronics for safe operation. 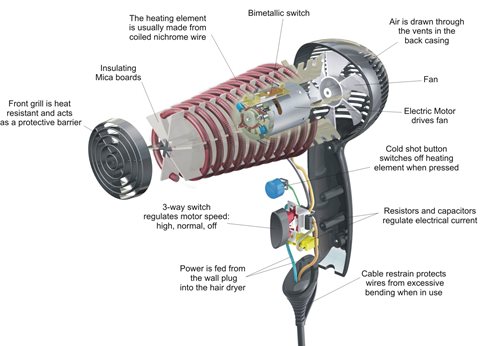 When a hairdryer is connected to a power socket and switched on, the electricity powers a heating element and an electric motor, which operates a fan in the dryer. The heating element converts the electrical energy into heat of up to 2,000 Watts. This process is known as resistive heating and is used in other household appliances, like the electric kettle and toaster.

Hairdryers often have a ceramic or polymer frame and casing. Polymers are lightweight plastic materials with a limitless range of colours and significant degrees of strength. They are also good thermal and electrical insulators. They protect the internal components of the hairdryer and users from burns and electric shock. Polymer casing also allows for injection moulding; a fast manufacturing process used to produce large numbers of identical items of plastic with compartments that interlock with snap-fasteners for easy assembly.

The electrical motor and fan are at the back of the casing in an area called the air inlet, which is covered with a fine mesh screen to prevent objects accidentally getting caught in the fan blades. At the opposite end is the air outlet, with a heat resistant and protective front grill, where the nozzle is attached. The heating element, which sits in between the air inlet and outlet, is a conductor usually made of coiled nichrome wire, typically 30 centimetres in length. The wire looks like a coiled spring and is wrapped around an insulating board so that the entire heating element is only a few centimetres long. This insulating board is usually made of mica, a mineral found in India, Belgium, Brazil, and China, which can withstand extreme temperatures. Two flat pieces of mica form a three-dimensional X that has notches cut in the edges to keep the wrapped coiled nichrome wires in place, allowing air to flow through the long barrel casing.

An electrical circuit connects the ends of the heating element’s coiled wires to the power. The three-way switch in the handle controls the power to the motor and heating element, allowing control of the airflow and temperature. Sensors keep the hairdryer at a comfortable temperature and detect overheating. A cut-off switch made from a bimetallic strip shuts the unit down when necessary, preventing the hairdryer from exceeding 60°C. A thermal fuse built into the circuit provides another layer of safety, instantly breaking the circuit when the temperature exceeds the limit. The ground-fault circuit interrupter is built into the hairdryer to prevent electrocution. It senses how much current is flowing through the circuit and can shut it off if it detects a leak or a short circuit.

The electric fan rotates and blows air across the heating element. As the air passes through the heating element, the air is warmed and heated up. The hot air exits the dryer through a nozzle, to concentrate the air flow. When it reaches wet hair, it absorbs the moisture and dries the hair.

BIOGRAPHY
Dr Ozak Esu is an ambassador for the Queen Elizabeth Prize for Engineering (QEPrize). She is a chartered electronic and electrical engineer and a member of the Institution of Engineering and Technology. Follow her on Twitter: @esu_o

Manufacturing and supply chains are preparing to distribute the COVID-19 vaccine after an accelerated development process.