• At any given time, at least four GPS satellites are visible in the sky anywhere on Earth

• New technologies could boost accuracy and even help us navigate indoors

Satellite-based positioning technologies have taken over the world since their inception during the Space Race. Although they can now pinpoint a location to within a few metres outdoors, they still suffer from unsolved problems, such as drift near obstructions like tall buildings, bridges and trees. Now, companies like Focal Point Positioning (FocalPoint) are using sensor fusion and signal processing technology to overcome these problems and find new applications for the technology.

It’s hard to imagine life without GPS. Instead of poring over a map and writing down directions, we grab a postcode and plan a journey at the touch of a button on a smartphone or satnav. We can watch a taxi driver or takeaway as it approaches or watch ourselves trundle towards an e-scooter around the corner. Of course, it goes beyond our everyday conveniences: thanks to GPS, paramedics can pinpoint a person in need of medical assistance down to a few metres. Air traffic controllers at airports can track and monitor inbound planes to prevent delays and collisions. Ships can be carefully guided through the busy English Channel. Conservationists can track animals and their migratory patterns, from flocks of swifts to herds of bison.

So how does this technology work, and what possibilities could open up if it was to become even better than it already is?

GPS and GNSS
Satellite-based positioning was conceived in the days of the Sputnik I satellite and the Space Race. When Sputnik I was launched, Soviet engineers equipped it with a radio emitter to allow people on Earth to track the satellite’s launch and orbit. Scientists knew that the frequency of these signals dropped slightly as the satellite passed the receiving station, thanks to the Doppler Effect (which describes the difference between the frequency of a wave when it leaves a source compared to when it reaches an observer). They then realised that this frequency data could be used to predict the satellite’s orbit, and furthermore, that they could use this same principle to calculate the position of an object on Earth, and so GPS was born.

– GPS, operated by the US

– Galileo, operated by the EU

All GNSS are, at their core, just atomic clocks in space, ticking. The messages we receive from the satellites tell us the time from these incredibly precise clocks, along with information that lets us calculate exactly where the satellites are in space. By comparing timestamps from different satellites at different locations, we can work out exactly where (and when) we are, as GNSS receivers don’t just calculate position to within a few metres in good conditions, but also calculate time to within a few nanoseconds too.

Minimising error
In the late 1990s, civilian GPS signals were intentionally degraded by an inbuilt feature called ‘selective availability’. This was designed to prevent the US’s enemies from using GPS to their advantage and introduced errors of 50 metres horizontally and 100 metres vertically. It was disabled in 2000 for various reasons – primarily because academics and commercial enterprises across the world had developed a variety of methods to counter it. With the flick of a switch, civilian GPS accuracy went from 50 metres to 5 metres and the world changed in a way that many people have never considered. Imagine if your sat nav was always wrong by at least 50 metres? How annoying would that be for door-delivery services like Deliveroo and Amazon? How dangerous would it be for the emergency services? Precise GPS-based technologies that we take for granted today, such as those in autonomous agriculture systems and low-cost drones, could not have been developed. Our fitness trackers would be useless. However, even with selective availability disabled, there are still places where we encounter high GNSS errors to this day, such as in cities.

Today’s consumer watches and smartphones determine location using more than just GNSS data. They incorporate Wi-Fi and cellular positioning, as well as using inertial data from accelerometers and gyroscopes, which measure directional change and orientation as you walk, run or drive. They can also include a digital compass that senses the Earth’s magnetic field. Finally, a tiny barometer helps to calculate an accurate height measurement. All this data can be combined to provide the most accurate position fix available, and to help to maintain position estimates in regions where GNSS signals are blocked, such as indoors. But can we also change how GNSS works to improve performance right at the very core?

Maximising accuracy in cities
GNSS receivers struggle to maintain high accuracy in cities because the signals from the satellites can be blocked by buildings and bounce around between them, leading to incorrect measurements being processed by the GNSS chip. It is likely that most people have experienced confusing or incorrect GNSS fixes while trying to navigate in a built-up area.

Canary Wharf, London’s financial district, is an excellent example of a difficult GNSS environment: a forest of skyscrapers with highly reflective surfaces. It’s what is sometimes called an ‘urban canyon’, as there is limited view of the open sky and, as a result, the satellites. This means any GNSS device in the vicinity will be inundated with reflected copies of the signal as they bounce around between the buildings. A normal receiver will detect all available versions of the signals and be unable to tell the difference between a signal that has arrived on the line-of-sight path, and one with extra delay from reflections. The result is poor positioning, such that your location may appear across the street or further away from where you actually are. Although that might cause havoc with getting to your destination or finding a driver from a ride-hailing app, it could present real safety challenges if autonomous vehicles are to rely heavily on GNSS. 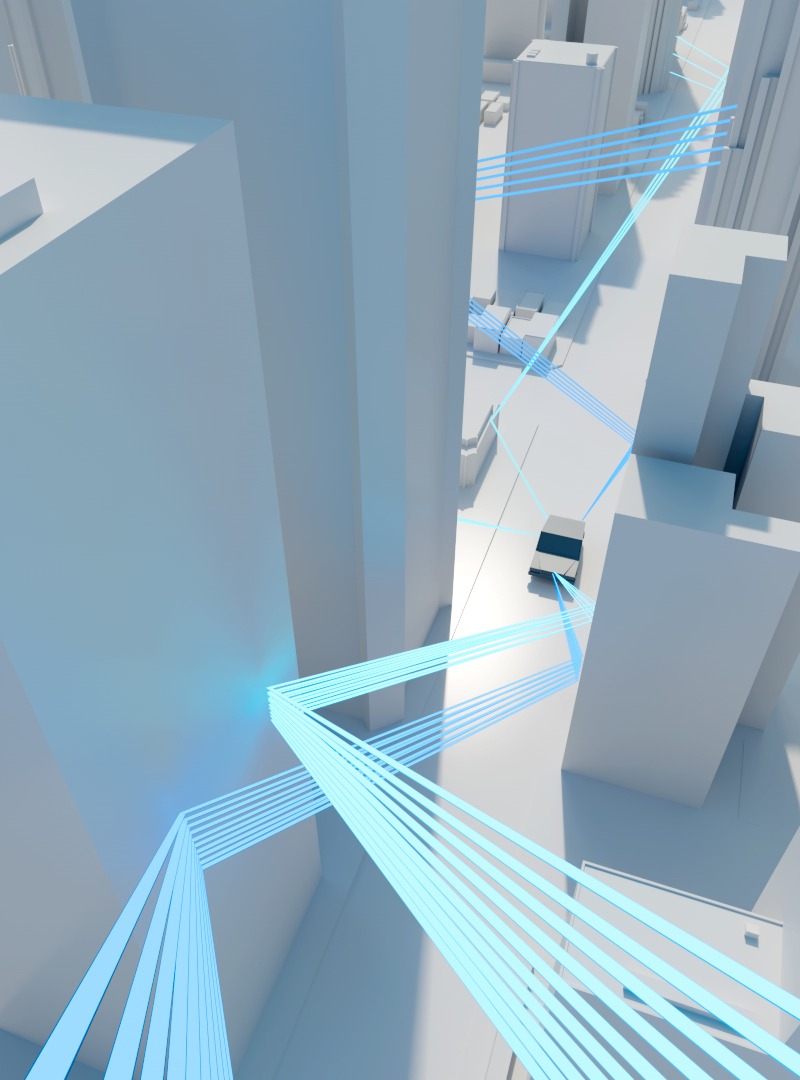 However, a solution to these urban GNSS challenges may be just around the corner. One approach comes from Cambridge-based startup FocalPoint. The company has developed a software-based GNSS technology called Supercorrelation, which performs position calculations using only the measurements from line-of-sight signals. It does this by determining the arrival angle of signals, allowing it to keep any signals that have travelled in the correct straight-line path from the satellite, while discarding reflected signals that arrive at the user from other directions. According to the company, the result is consistently accurate and reliable fixes, even in the most difficult signal environments.

Supercorrelation’s approach combines sensor fusion, machine learning and signal processing, developed over several years by FocalPoint’s expert team. But FocalPoint isn’t alone in developing a solution to the urban canyon GPS issue. The company has developed another approach in collaboration with Google. This is currently used in Android devices and provides mapping corrections based on Google’s own 3D models of buildings in nearly 4,000 cities around the world

Keeping athletes to time
The COVID-19 lockdown saw GNSS being stretched to its limits in the world of elite sports, as marathons and official championship-status events were staged virtually. These required runners to upload their sports watch data to determine medal places. In one case, there was a gap of just 0.05 seconds between second and third podium places. It is unlikely that the current consumer-grade GNSS chips in sports watches are accurate enough for that decision to have been any more confident than the flip of a coin.

This is another challenge FocalPoint has been working towards addressing. The company has developed D-Tail, a human-motion-modelling software package that converts motion patterns in the accelerometer and gyroscope data from a smartphone or sports watch into a 3D reconstruction of motion through space. FocalPoint says it allows accurate positioning to be maintained as people move in and out of buildings, and provides the most accurate metrics for sport-fitness applications, where the combination of information from GNSS and human-motion-modelling software provides more precise metrics than either alone can. 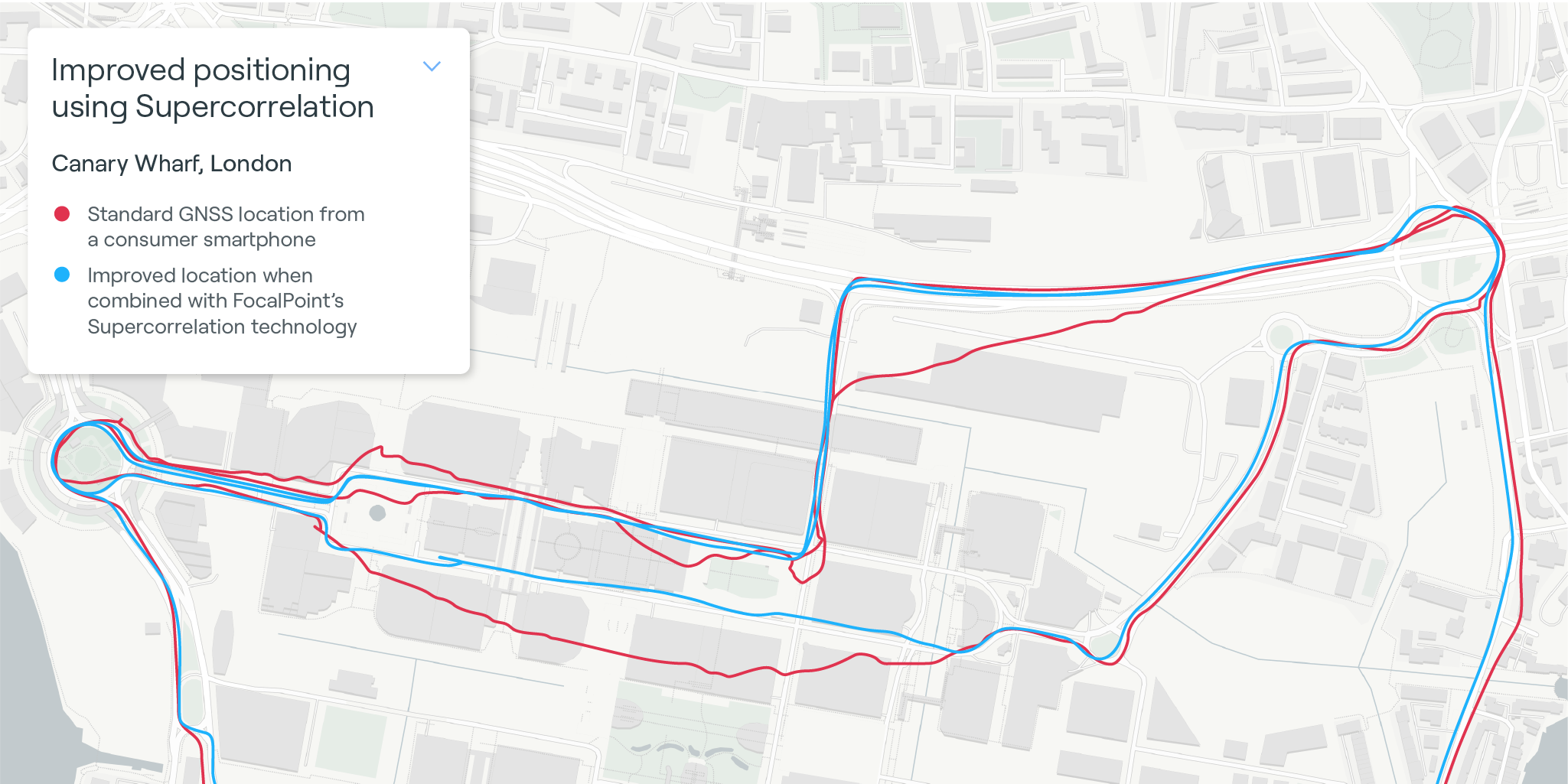 While it’s important to provide high-performance wearable technology to athletes so they can use accurate data to govern their training, shape performance and shave precious seconds off race times, precision positioning will have a far greater impact elsewhere.

Centimetre-level accuracy is already being used in China for early-warning systems for landslides with the BeiDou GNSS network. Expanded elsewhere, it could make possible further applications in disaster planning and recovery. Looking to more commonplace applications, technologies such as FocalPoint’s will enable autonomous vehicles and drones to navigate more safely in cities, mountainous areas and forests. We may see last-mile delivery robots navigating pavements, or apps that help us navigate to the right train platform or supermarket shelf. And of course, we will never again get lost in Canary Wharf.

Unseen corrosion can cause severe issues if left undetected in infrastructure. A new tool aims to identify the problem before damage is caused.