Did you know?
• The UK has the worst biodiversity record of all G7 countries, with only half still intact
• A new law, introduced in 2021, will require developers to increase biodiversity when working on any new infrastructure projects
• Teams that include engineers, ecologists, developers, and construction workers are key to achieving these biodiversity targets

If engineers planning, designing or implementing new infrastructure works are not already familiar with the concepts of natural capital and biodiversity net gain, they will have to learn fast. Under the Environment Act, new developments are required by law to demonstrate ‘biodiversity net gain’, which will require important changes to the way engineers work. Engineer and writer Hugh Ferguson talked to the multidisciplinary teams behind some of the projects already making this gain.

Biodiversity is the variety of living species on Earth in both natural and built habitats. It is decreasing at an alarming rate worldwide and the UK is behind many other developed countries in tackling the issue. Britain has strong ecological protections through, for example, Areas of Outstanding Natural Beauty and Sites of Special Scientific Interest (SSSI), and the current planning system discourages biodiversity loss from new developments.

Yet the UK has only half of its biodiversity still intact, the worst record of all G7 countries: 40% of the UK’s most important habitats are still declining, and more than 40% of UK wildlife species have declined since the 1970s. There are many reasons why this is such a concern, with just one being the enormous value that nature provides to the UK’s economy and wellbeing.

In a bid to reverse this trend, the 2021 Environment Act requires all new developments to make a 10% biodiversity net gain (BNG) – an approach to development that aims to leave the natural environment in a better state than it was beforehand (see ‘Measuring biodiversity’). It also introduces a metric to measure BNG. The law doesn’t require full implementation until at least November 2023, but pilot schemes have been underway for several years, with Network Rail and National Highways (formerly Highways England) among the ‘early adopters’. These early trials give a good idea of the changes to come in the planning, design and implementation of infrastructure projects.

The likely lessons for engineers include the value of establishing multidisciplinary delivery teams early on; the importance of involving ecologists at the earliest stage of planning; and the need for engineers themselves to develop a greater knowledge and understanding of ecology.

The largest infrastructure project so far to commit to 10% BNG is the £1.2 billion phase two of East West Rail (EWR2). East West Rail is a new line linking Oxford and Cambridge. Phase one from Oxford to Bicester was completed in 2016; phase three awaits the result of a public consultation last year on the line of the new railway from Bedford to Cambridge. Meanwhile, the East West Rail (EWR) Alliance of Atkins, Laing O’Rourke, VolkerRail, and Network Rail is building phase two from Bicester to just past the West Coast Main Line at Bletchley, with a spur to Milton Keynes. It includes 48 kilometres of new rail infrastructure, all along existing antiquated or disused railway, including 15 new bridges, 23 bridge refurbishments, new and extended stations, and a key intersection with HS2.

Achieving 10% BNG on such a large scheme meant challenging existing design methods and putting collaboration at the heart of the process. EWR Alliance decided from the start that the most cost-effective solution would involve taking every opportunity to retain or improve existing habitat within the site boundary – the ‘mitigation hierarchy’ (see box) – so limiting the amount of new (and generally more expensive) off-site habitat needed to reach 10% BNG. From the start, this required multidisciplinary working between ecologists, engineering designers and construction teams.

Indeed, starting early was crucial. Although the route was largely fixed by the line of the disused and abandoned railway, there was plenty of scope for habitat improvement. The team carefully examined every metre of the route for potential gains, before the ‘red lines’ defining the boundary of the construction site were confirmed. Many of the gains were very small, such as filling in small gaps in existing woodland, but together they added up.

The ‘red lines’ had to include space, for example, for constructing new bridges or compounds for construction work. It was also possible to add in some areas adjacent to the railway to create a series of ‘ecological compensation sites’ (ECSs). This meant that, long before the Works Order enabling compulsory purchase of the land within the red lines was granted, the EWR Alliance could offer individual landowners a deal: lease the land to us for five years and we’ll create the new habitat; then we’ll hand it back but still pay a rental for you to maintain it, subject to annual ecological inspection, for another 25 years. Some declined, preferring to wait to see whether the project went ahead. Others agreed, allowing construction of some of the ECSs to begin three years before the main construction works, which helped reduce the time lags for key larger habitats such as meadows, hedgerows and woodland, and act as receptor sites for the translocation of legally protected species.

This included the 8-hectare Station Road ECS. Here, the team created six ponds on former pastureland, as mitigation for great crested newts – a species protected throughout Europe because of rapid decline in population, and known to be breeding in numerous local ponds. This ECS was a key receptor site for displaced and translocated great crested newts from nearby habitats lost to a new overbridge. It is also designed for other amphibians, such as toads and smooth newts, and provides a stepping stone between other well-established wildlife sites.

The ponds and the surrounding wildflower meadows provide a source of food and refuge for a variety of wildlife, from voles and field mice to bees and butterflies. Surrounding scrub has been planted with blackthorn, a food for the larvae of the nationally rare black-and-brown hairstreak butterflies that thrive locally. New hedgerows provide habitat for hedgehogs, another declining species, as well as commuting routes for bats, with the whole ECS already a large foraging area for a range of bat species. 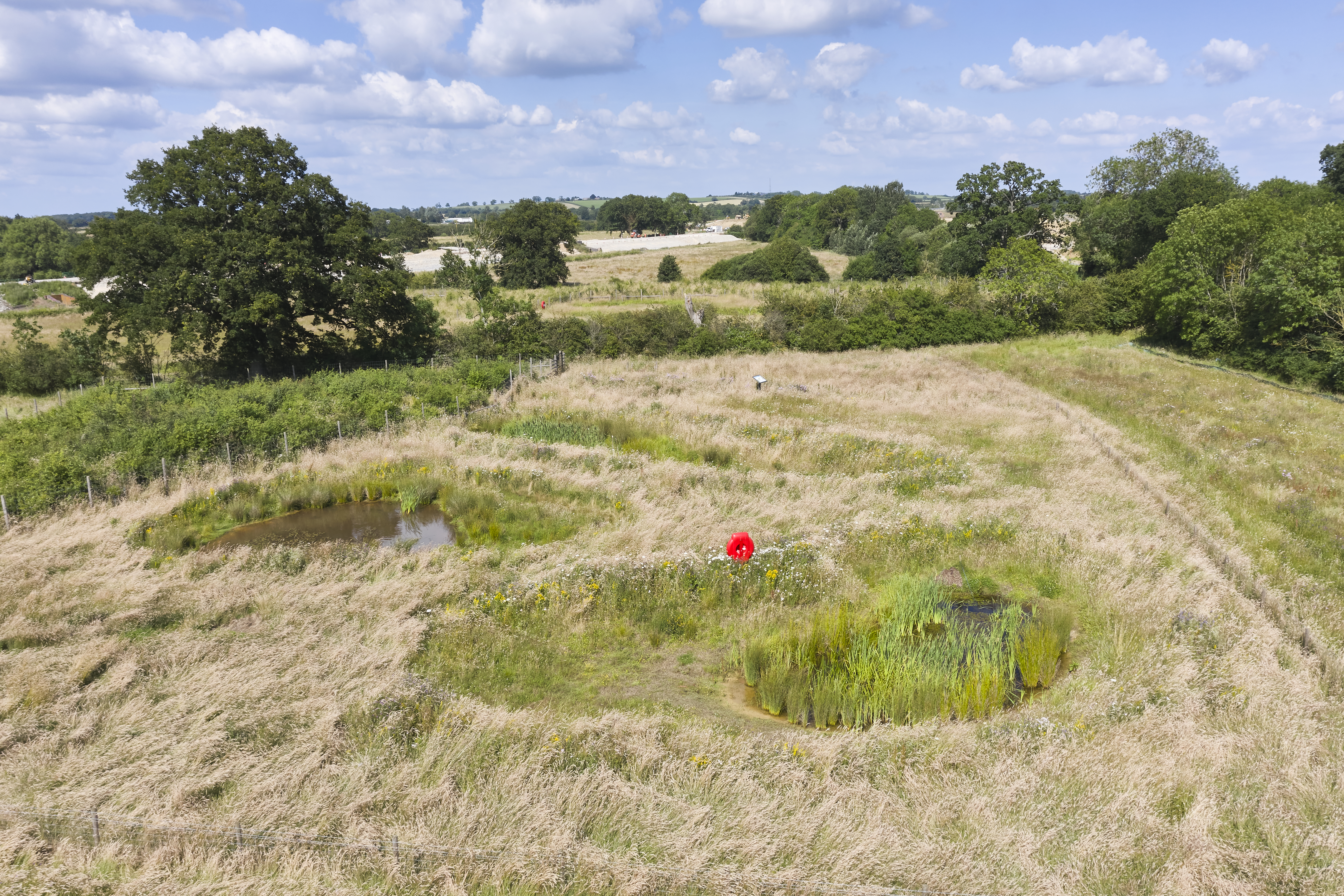 Three of the six new ponds in the Station Road ECS, all of which are already occupied by breeding great crested newts © EWR Alliance

Applying the BNG matrix shows that, with the mitigation initiatives, EWR2 has transformed what would have been a substantial loss of biodiversity to almost no loss. Some extra off-site initiatives are needed to achieve the required 10% net gain – but much less than would have been the case without the mitigation, at a much lower cost, without compromising the scheme’s benefits to nature.

From an engineering viewpoint, more of the existing earthworks for the old railway were retained and stabilised where necessary, than had originally been planned. This also retained more existing vegetation, which also increased BNG, and saved money. Flood resilience was another major factor, so exceptionally good drainage was essential. Although good for longevity, concrete-lined drains are bad for BNG, so engineers opted for open ditches with stabilised banks instead. 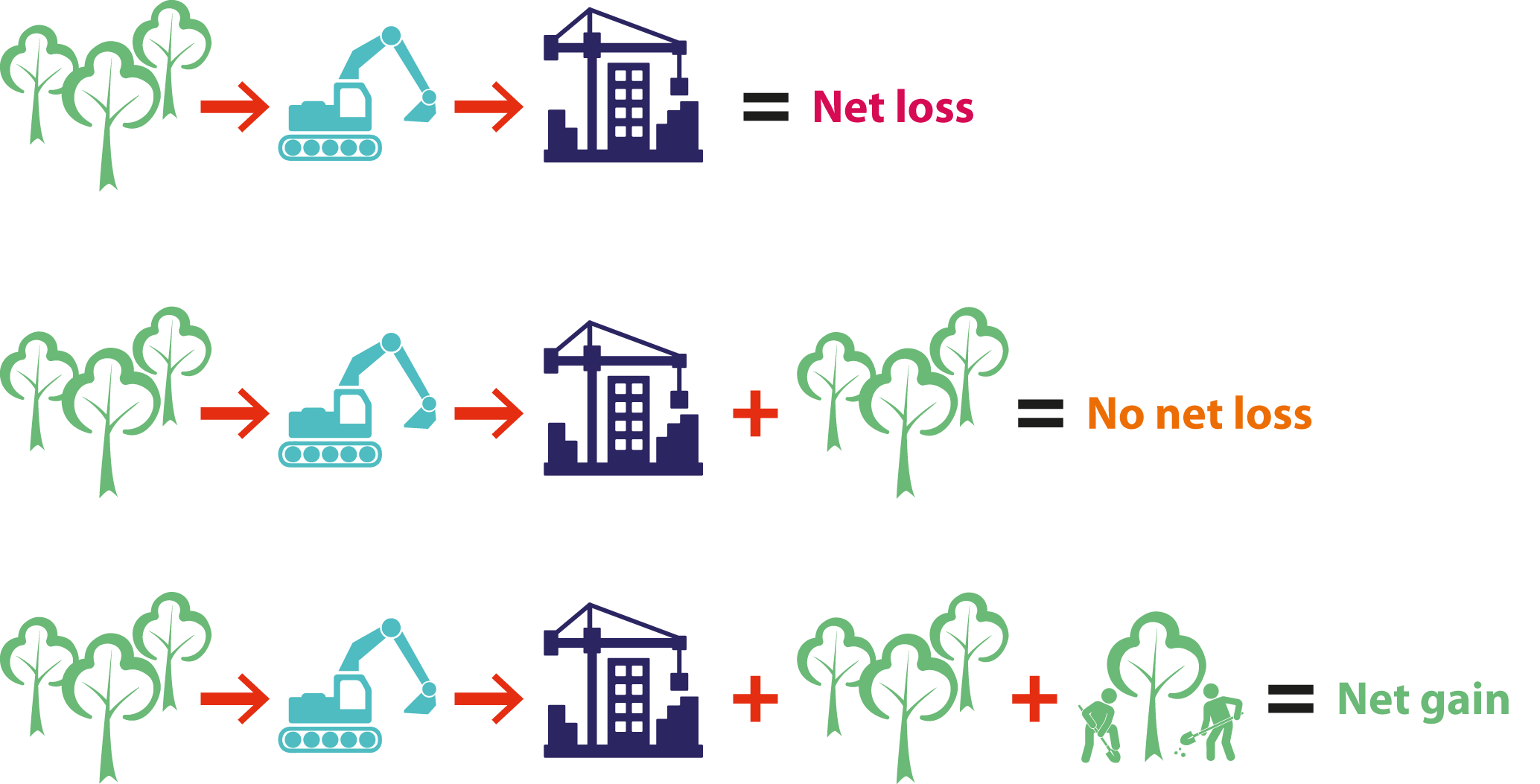 On other infrastructure projects, where the scope for mitigation may be less, the need for biodiversity offset sites becomes more important. A new market is emerging for buying and selling biodiversity units. Wildlife trusts can fund improvements or expansion; other organisations such as water authorities or the National Trust may find a new source of income, without compromising their main purposes. Some farm owners may judge that selling biodiversity offsets will be a more profitable use of their land than conventional farming. All such sites must be secured for at least 30 years, subject to regular reporting and inspection to ensure that the habitat is being properly maintained. Like all new markets, prices vary wildly and are highest where new development is concentrated.

The Oxford–Cambridge corridor is such an area, and local property consultant Bidwells has been seeking out possible sites. Key factors include potential for biodiversity uplift and proximity to existing established wildlife habitats, while the highest grade of agricultural land and land scheduled for later development are avoided. One of the selected sites is the 140-hectare Lower Valley Farm, 8 kilometres southeast of Cambridge, owned by Cambridgeshire County Council.

Close by is the site of the planned new four-platform Cambridge South Station on the main line to London, and likely to be on the last stage of East West Rail. Subject to a public inquiry that opened earlier this year, the new station will serve Addenbrookes Hospital and the flourishing and expanding biomedical campus alongside it. Network Rail has already secured an option to buy 56 biodiversity units from Lower Valley Farm if the station goes ahead.

The farm is currently arable with boundary hedgerows and some woodland, situated within the Cambridge Nature Network and adjacent to a SSSI. The plan is to convert this to biodiverse habitats of ‘good’ condition, as defined by the DEFRA matrix (see box). Exactly how this will happen, and how fast, will depend on market demand for biodiversity units. Parts may remain as arable farmland for some time, or alternatively new habitat may be developed as a ‘habitat bank’, for future sale at an uplifted price as the biodiversity will be more fully developed.

The road to BNG

Land, which is in short supply, is needed for roads but is also a fundamental resource for many other things – including biodiversity, agriculture, landscape quality, water quality, and flood alleviation. The key challenge is developing decision-making processes that optimise land use across these functions, while providing value for money. Roads have historically been a source of biodiversity loss, but National Highways is on course to move into no net loss across its network by 2025, moving after to reach net gain. 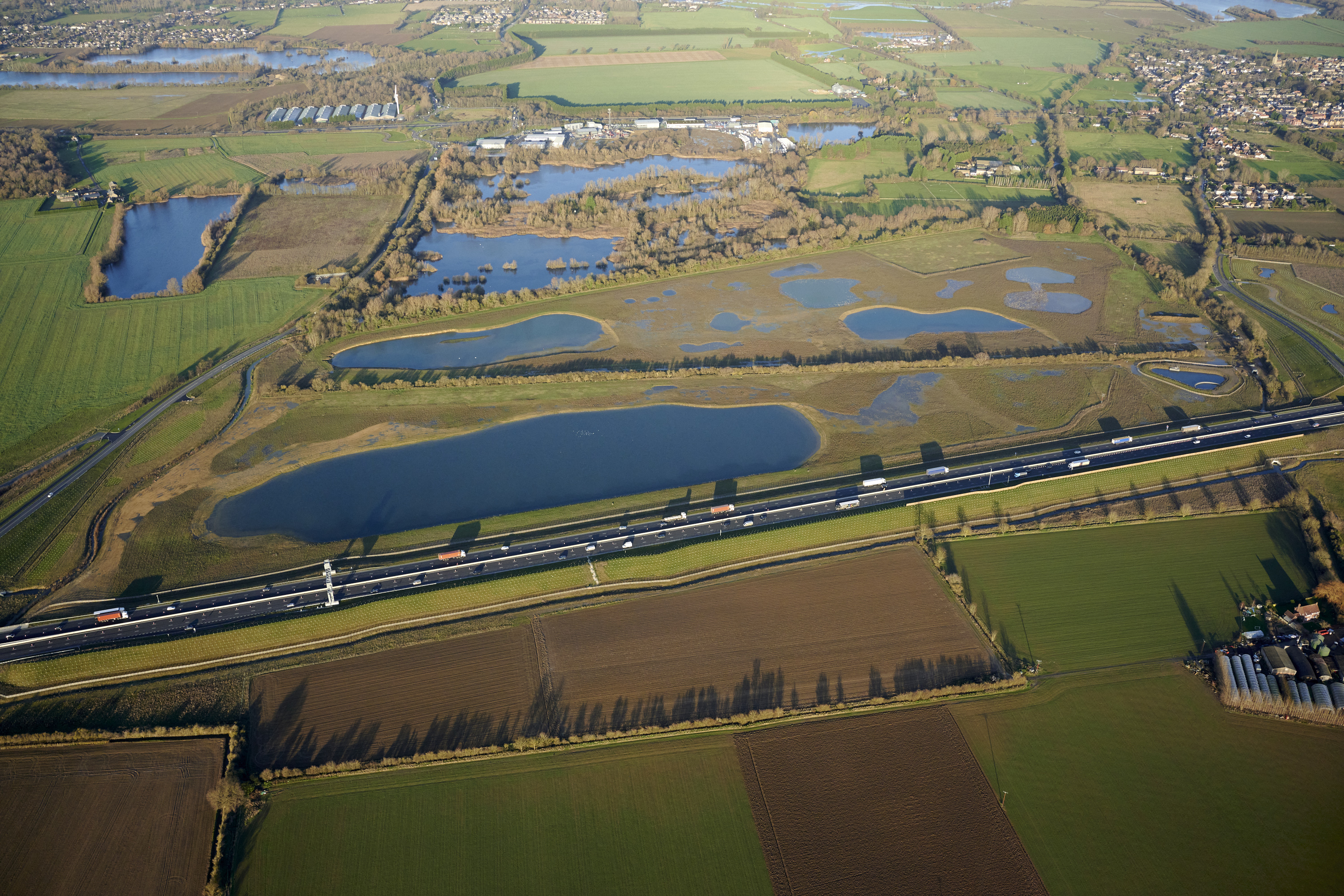 The £1.5 billion A14 Cambridge to Huntingdon scheme, completed in early 2020, considered biodiversity during planning. However, the new biodiversity metric was only applied retrospectively after the design was complete, largely to provide evidence for future schemes. The result was that the road had achieved a remarkable 11.43% BNG, although there were details that, with hindsight, could have been improved to benefit key habitats. The main factors contributing to the high score were the fact that most of the land taken was agricultural, with low biodiversity value, and that some of the borrow pits required to provide material for embankments were subsequently converted to woodland, grassland, wetland, and open water habitat, with high biodiversity value. Overall, the project created 220 hectares of new wildlife habitat, including landscaping of roadside verges, and planted some 860,000 new trees and 40 kilometres of hedgerow. There are also 24 wildlife tunnels across the road, to allow animals such as water voles and otters to cross safely.

Other lessons from the A14 project replicate many of those from the EWR Alliance. This includes the value of having an integrated delivery team including client, consultants and contractors – in this case, National Highways and joint ventures of Atkins/Jacobs and Balfour Beatty/Costain/Skanska – in place from an early stage. The project team also tested for BNG when planning, involving ecologists from the start.

Clearly, one effect of the new legislation is that ecologists will need to be involved in infrastructure projects from the earliest stages of conceptual design, rather than just consulted after initial decisions have been taken. But the main issue, as one of the EWR Alliance design team puts it, is that engineers themselves need to change: “It’s about us as engineers learning about ecology and nature. It will help us to be better designers.”

Metamaterials, metalenses and beyond

Techniques used to manufacture semiconductors are being used to make lenses ultrathin, leading to even slimmer smartphone cameras.

Modern technology is playing an increasingly important role in the maintenance of key infrastructure and other systems.