The London Underground system hosts over a billion passenger journeys a year and the number is rising. Escalating fuel costs and the need to control tunnel temperatures and cut carbon emissions mean that the Tube has to be as energy-efficient as possible. Kevin Payne, Head of Power, Communications and Cooling at London Underground, explains how the capital is tackling its energy challenges. 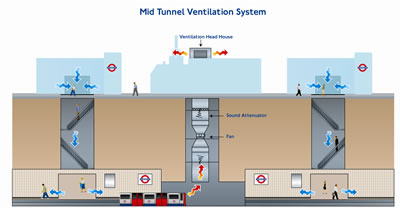 Simplified cross-section showing how air movement is maintained by the combination of fans and the piston-effect of trains moving in the tunnel. Ambient air is drawn in through the stations, moves along the tunnel, collecting heat energy, and is expelled through the fan shaft. The fans have to be capable of dealing with the changes in air pressure that result from trains passing the bottom of the ventilation shaft. This is achieved by careful selection of blade angle, use of power-electronic drives for the fan motors, and, in some cases, provision of anti-stalling rings © TfL

The world’s first underground passenger railway was a four-mile line from Paddington to Farringdon in London, which opened in 1863. The 18-minute journey was first made in gaslit wooden carriages pulled by steam locomotives. It proved an instant success, with 40,000 passengers riding on the first day. Now, the London Underground system hosts over a billion passenger journeys a year on its 250 miles of track.

Energy efficiency is always a priority for underground networks so that costs can be kept to a minimum. Urban electric railways, light railways, and tramways are among the most efficient means of transport but, without intervention, predicted passenger demand would drive London Underground’s electricity consumption up by more than 30% a decade, from its current level of 1200 GWh/year.

A further incentive for energy efficiency has come from the London Mayor’s office. It has set a target for 2025 to cut carbon dioxide emissions to 40% of their 1990 levels. And finally, the Tube network has the challenge of controlling temperatures on the deep tunnel lines of the Underground so that passengers don’t get too uncomfortable in the summer.

The first sections of the London Underground were built just below street level with large tunnels and good ventilation. Then, from 1890, London pioneered the use of ‘tube’ railways with small tunnels bored through the clay deep below the surface. When a deep rail tunnel in London is first opened, the air within it is around 14°C, the same temperature as the surrounding soil. However, as soon as trains begin to run, dissipating energy, the air and infrastructure begin to warm up.

After about five years, a new equilibrium temperature is reached which can be 10°C higher than when it opened. The exact temperature reached depends upon the number, type, and speed of trains operated. It is also governed by the amount of fresh air driven through the tunnels by a combination of ventilation fans and the piston-effect of the moving trains. When the number of trains is increased, temperatures rise again and the background temperature now reaches 28°C on summer evenings. This is too warm to be comfortable, and a combination of energy efficiency and cooling measures is being used to prevent further service increases pushing temperatures higher.

A key means to secure energy efficiency and reduce heat is to use regenerative braking. This converts the kinetic energy in a moving train back into electricity as it stops at a station. The recycled energy is then transmitted to other trains that are accelerating, saving approximately 25% of the energy needed to run a given train service when compared with traditional forms of braking. Automatic control of trains also helps control energy consumption by ensuring that every train follows the optimum cycle of motoring, coasting and braking by regeneration, taking into account the curvature and gradients between each pair of stations. By 2018, services on eight of London Underground’s 10 lines will be operated by trains with regenerative brakes, running under automatic control.

With a fully loaded train accelerating away from each central London platform 30times each hour at peak periods, energy efficiency alone is not enough to control temperatures to acceptable levels. On the recently upgraded Victoria Line, the throughput of fresh air has been doubled, and additional cooling systems have been installed at two stations, with a third to follow.

The conventional solution to double air throughput would have been to sink additional ventilation shafts, but property acquisition costs and timescales have made this unviable. Instead, London Underground has installed new fans into the existing shafts. The fans have capacities up to 100 m3/s and the greatest challenge has been to control their operating sound levels. A lot of the fans are situated alongside residential accommodation and others are in areas that are otherwise very quiet at night.

Splitter-plate attenuators, each about the size and weight of a small delivery van, have been fitted on each side of each side of the new fan. In several cases, it has been necessary to fit the attenuators within the narrow shafts descending through the tunnels or within the ‘chimneys’ that convey the warm air out and above the roofs of adjacent buildings. All of the new fans and the dampers can now be controlled remotely so that air flows can be shut off or reversed when necessary.

Air handling unit schematic: fans and coils are housed in the support structure, with a ‘strong-back’ structure used to support the unit from the tunnel lining. Cool water passes through a series of finned coils, across which warm air is blown by small fans © TfL

At Victoria, Green Park and Oxford Circus stations, there was no viable way of achieving the amount of cooling required using fans. A review of alternatives identified water, ideally from a naturally cool source, as the medium to transport heat energy out of the system. London Underground worked in partnership with researchers and engineers at London South Bank University on concept development. To avoid creating condensation problems and to limit energy consumption, they decided to supply cool, rather than very cold, water, which meant that large water/air heat exchangers, known as Air Handling Units (AHUs) would need to be installed. This would give the required 200 kW of cooling needed for each tunnel at each station.

Owing to the lack of space in tunnels, the only space available for the AHUs was above the tracks in the station platforms. The London Underground design team set out to create units that would require little maintenance, have low energy consumption, be visually acceptable, and which could be installed during the normal night-time maintenance shutdown of train services – a window of around four-and-a-half hours. 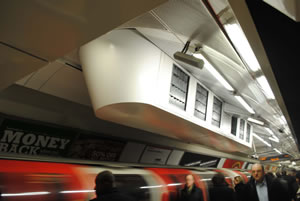 The air handling units in situ with coils, fans and other components supported by a frame, attached to a set of hangers suspended from lining rings on the tunnel roof © TfL

A small-scale trial system was installed above a concourse within Victoria station in 2006, using 50 kW AHUs supplied with cool water from an underground river that drains to a huge sump below the station. The trial was successful and secured a Carbon Trust Innovation Award in 2007 – see Developing cooling units.

By June last year, 24 AHUs had been fitted at Green Park and Oxford Circus, in time to improve the environment for passengers attending the London 2012 Olympic Games. Each unit provides a stream of air, cooled to around 16°C, that circulates around passengers waiting on the platform, and is then driven into the tunnel by the piston-action of the moving trains.

Cool water to supply the AHUs is sourced differently at each station. At Green Park station, water is from the chalk aquifer 130 m below the ground. The two uptake and two re-injection boreholes were created with the assistance of the Royal Parks in the adjoining park. At Oxford Circus, water is circulated to rooftop heat exchangers; ambient air provides most of the cooling, with refrigerant chiller units supplementing the system in warm weather. The full system at Victoria will be installed as part of the major upgrade of the station that is underway, and will use water from the same sump that is used to supply the trial installation at the site. 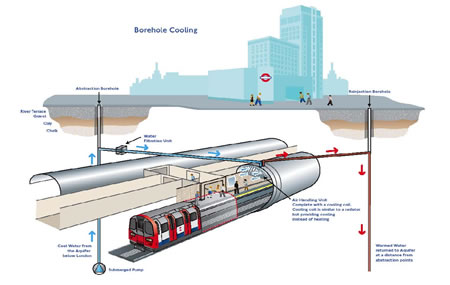 At Green Park station, naturally cool water is drawn up from two deep boreholes in the park next to the station. The water is pumped through filtration units and then circulated through the eight air handling units in the station. The cool air from the AHUs is driven into the tunnels by the action of the trains acting as pistons © TfL

Approximately 80% of the electricity used on the London Underground is expended on operating the train service. The remaining 20% of energy drawn for non-train operations is used for anything from heating and lighting in staff accommodation to general station lighting and powering escalators. In recent years, London Underground has run an ‘Energy Saving Challenge’ to encourage staff to use energy carefully. With the installation of smart metering, local station managers now receive rapid feedback about electricity use at stations through the ‘Station Energy Dashboard’, displayed on the company intranet, and can respond accordingly.

London Underground also has pilot installations of energy-efficient LED lighting in use at stations and is installing a combined heat and power system at a train care depot to replace old and inefficient boilers.

Future initiatives for reducing energy and heat include a collaborative scheme with rolling stock manufacturing partners. London Underground has developed a concept design for future deep tunnel trains that incorporates a new type of articulation, with adjacent cars sharing bogies, or pivoting frameworks carrying the wheel sets, which reduces train weight. The bogies are also much more flexible – which reduce frictional losses between wheels and rails as the train passes around curves. These trains will also have wide gangways linking cars, creating the space for more passengers on each train. The concept train is expected to deliver a 20% reduction in train weight for each passenger compared with the most recently delivered deep tunnel trains.

London Underground is also seeking tenders for the supply and field-trial of a prototype unit to further increase the amount of energy that is recovered and recycled through regenerative braking. The traction power supply system operates at a relatively low voltage, in the range of 630 V to 890 V direct current, which limits the distance over which regenerated energy can usefully be transmitted to 4 miles. By inverting the regenerated energy, to create alternating current, and transforming it to a high voltage, it can usefully be transmitted much further. The trial unit is expected to enter service in 2014 and is predicted to save 0.8 GWh each year.

The Tube is a complex but well-bounded system. It can independently control and manage its energy needs. In the future, it will seek to source much more of its electricity from low-carbon energy generation. All of the energy used by the Underground arrives through the National Grid, but by choosing which generating stations the electricity is sourced from, it is possible to influence the level of emissions. London Underground is also exploring the possibility of partnerships that may allow generating station owners to fund the installation of new, lower emission plant, on the strength of long-term energy supply contracts.

As it upgrades its stations, trains and signalling systems, Transport for London (TfL), which is responsible for London Underground, will look to limit both energy use and spending. TfL’s objective is to create “A world class transport system for a world class city”. By using innovative engineering it aims to deliver a transit network that remains fit for the 21stcentury.