Unmanned aerial vehicles have been in operation for many years, particularly for military purposes. However, recent advances in technology have increased the potential uses of drones, such as for aerial photography, agriculture, and search and rescue.

Improvements in battery life, motor power and gyroscopes mean that users have more control over drones than ever before, while improvements in manufacturing mean that the component parts are more affordable.

Previously, radio-controlled vehicles relied on nickel-based batteries – either nickel-metal hydride or nickel-cadmium batteries – which have significantly smaller capacity per kilogram of battery than the newer lithium polymer batteries. These nickel batteries were not powerful enough to be used in drones, as in drones the thrust from the motors alone provides lift. 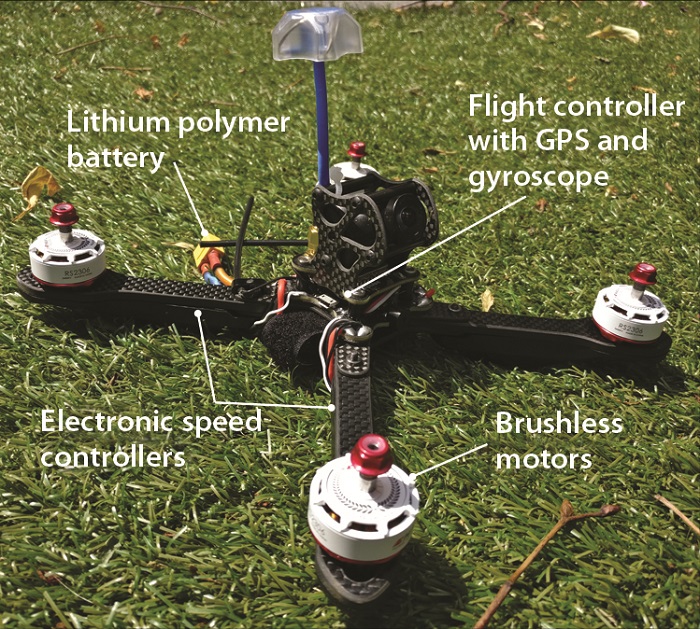 The component parts of a drone

Most drones currently use lithium-polymer batteries, but there has been little improvement in their performance, and they are the most limiting factor for drones today. For professional drone racing, users require batteries with internal resistance values less than one milli-ohm per cell. New lithium-sulphur batteries have two to three times the capacity of the previously used nickel-based batteries, and may be the answer to the limitations of the lithium-polymer batteries. The batteries still need further work to stabilise the electrodes to prevent them from breaking down after charging-discharging cycles.

The motor technology that powers drones has also seen huge technological advances. The model aircraft of the early 2000s relied on brushed motors, a type of motor that uses brushes running inside the motor to commutate the current passing through the coils. It is mechanically complicated, but electrically simple as applying voltage across the motor makes it spin. A few years later, model aircraft enthusiasts experimented with brushless motors from CD drives. In a brushless motor, the commutation is performed electronically, using transistors to energise coils in the motor, which is more efficient than a brushed motor, and has a higher power to weight ratio. These powerful motors have more torque, or rotational force, than a brushed motor, so can produce the thrust necessary to allow drones to take flight.

As drones are inherently unstable, the flight controller needs to adjust the speed of the motors up to 8,000 times per second. This increased torque means that the motor can adjust its speed faster than a brushed motor can, ensuring that the drone is stable. Brushless motors require an electronic speed controller to adjust the speed of the motors, which adds additional cost. However, in recent years, the price of field effect transistors, the key component of the electronic speed controller, have dropped.

Drones need constant correction to stay level. A racing drone may only require a gyroscope to stay level, but drones that are used in aerial photography require a vast array of sensors. These often include a gyroscope, accelerometer, barometer, magnetometer and a GPS receiver. The cost and size of these chips has significantly decreased over the last 10 years. For example, a suitable chip containing a three-axis gyroscope and accelerometer costs less than £2.50 today, and is smaller than three millimetres squared, 10 times smaller than a similar chip would have been 10 years ago.

Advances in GPS technology have made hobby drones successful. Civilian GPS devices included a feature known as Selective Availability, which was an intentional reduction of public GPS signals for security reasons that caused an error in the reported position of the GPS device of around 100 metres, far too much for any drone to be able to remain steady. In the late 2000s, newer modules were released that update five times a second, providing the necessary precision for drones to remain stationary to within half a metre. More recently, global positioning units have been released that can receive GPS – GLONASS (the Russian equivalent), Galileo (European) and BeiDou (Chinese) – which can relay their position up to 10 times per second with even greater precision.

Ossian Keith is a mechanical engineering student at Imperial College London. He runs a website based on drones, droneinsider.org, and is particularly interested in drone racing.

The sky's the limit

432 Park Avenue in New York is one of the world's tallest and most slender buildings, so innovative engineering was essential to its design.

The 2017 Queen Elizabeth Prize for Engineering was awarded to the four engineers whose individual contributions led to the creation of digital image sensors.

The Bloodhound Supersonic Car has overcome several engineering challenges in its development. The vehicle is aiming to break the world land speed record in South Africa.