A new contender for energy storage 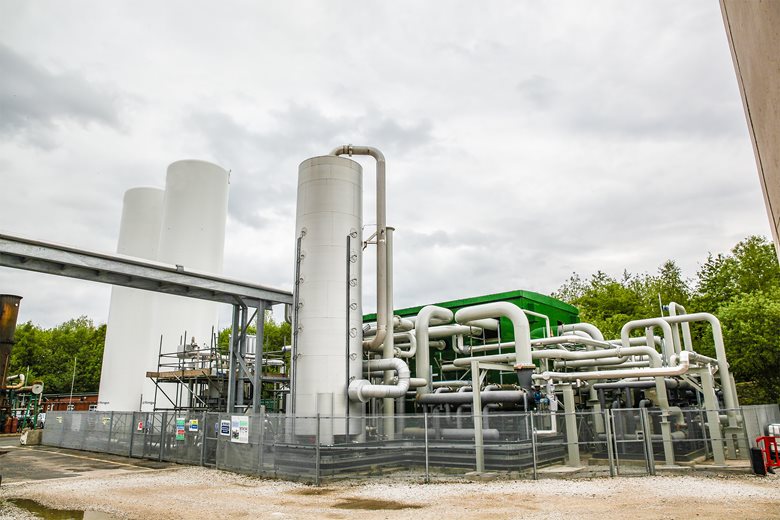 Energy storage has long been a challenge for those in the renewable energy field – what happens to unused energy generated by solar or wind power for example? A new system of storing it as liquid air could provide answers. Dominic Joyeux discussed how the system works with Highview Power’s Dr Javier Cavada, CEO and President, Gareth Brett, Chief Technology Officer, and Professor Yulong Ding, Director of the Birmingham Centre for Energy Storage.

In years to come, 2018 may be seen as the year renewable energy came of age. At the beginning of the year UK government data showed that, for the first time, the 29% of electricity produced by wind and solar was more than the total produced by nuclear (21%). The increase means that low carbon energy sources now account for over half of all electricity generated.

However, a long-running challenge has been how to store energy at times when there could be shortfalls caused by the wind not blowing or the sun not shining. UK energy storage enterprise, Highview Power, is going some way to solve this problem. In 2018, it opened the world’s first grid-scale cryogenic (liquid air) energy storage plant in Bury (‘World’s first liquid air energy storage plant’, Ingenia 76). The plant has a capacity of 5 megawatts and can store 15 megawatt hours (MWh) of electricity, which is enough to power about 5,000 homes for around three hours.

The main energy storage providers are pumped hydroelectric – 95% of global capacity – and lithium-ion batteries, which have been the fastest growing and account for most of the rest of the world’s energy storage. However, although pumped hydro has a long lifecycle of between 40 and 50 years and very large storage capacity, its main drawback is geographical, requiring the correct topography and two large reservoirs, the building of which can impact heavily on the environment.

In 2017, the potential of lithium-ion batteries captured the headlines when Elon Musk made a $50 million bet on Twitter that Tesla could build a 120 MWh battery storage in South Australia in under 100 days – if not, then the company would charge nothing for its construction. The state had been crippled by power shortages and took him up on his wager. Tesla delivered in 60 days and the result is the largest battery storage facility in the world, which supports and stabilises existing electricity supplies in the state.

However, although lithium-ion batteries seem to be the main contender for solving the renewable energy storage conundrum, they do have drawbacks. Lithium is relatively rare and its supply is controlled, in effect, by a handful of mining companies. Cobalt, which is needed for the cathode, is both toxic and rarer still. Although battery prices have dropped recently and they are a quick-responder when needed, batteries have relatively short lifecycles (between five and ten years), they degrade and they have a realistic limit of about four hours for harnessing large amounts of power.

Highview Power’s cryogenic storage solution ticks many boxes including sustainability, cost, effectiveness and the fact that it has a small footprint and can be sited anywhere. The only box it had not marked until now was demonstration at large scale. Now, with plans to begin building two large cryogenic energy storage plants in 2019, that is set to be ticked too. 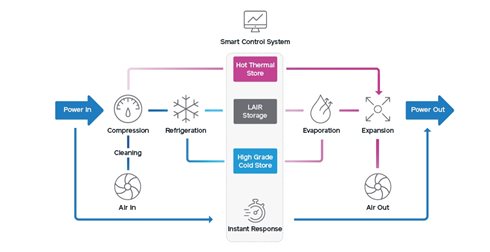 A process diagram showing the three stages of the producing, storing and recovering liquid air for generating power © Highview Power

Highview Power has created a whole new industry – clean cold. Co-founder Peter Dearman had an idea to build a reciprocating engine that was effectively driven by liquid nitrogen and could be used to power transport [‘Delivering clean cold and power’, Ingenia 68). In 2005, Dearman and power researcher Toby Peters founded Highview and tested the concept at the University of Leeds. In 2011, the engine part of the business subsequently branched off to form the Dearman Engine Company and has since found applications with transport refrigeration units and other cool-power projects.

In 2006, Gareth Brett, an electrical engineer with a background in utilities and banking, joined Highview and fundraised for a pilot plant. In 2009 he became CEO. By 2011, the world’s first liquid air pilot installation was installed in Slough and connected to the grid with the help of a £1.1 million grant from the then Department for Energy and Climate Change. The plant had a 350-kilowatt charge with two and a half megawatt hours of storage. Now the technical fine-tuning of the cryogenic storage project could be done, ensuring that an actual plant would perform in the same way as the process model of the system.

The cryogenic energy storage system consists of three main components: a charging device that uses off-peak or excess electricity to power an industrial liquefier to produce liquid air; an energy store where the liquid air is held in an insulated tank at low pressure, and a power-recovery unit where re-gasified liquid air is used to drive a turbine and generate electricity.

Ambient air is taken from the surrounding environment then using electricity it is cleaned, dried and refrigerated through a series of compression and expansion stages until the air liquefies. This process is based on a modified version of the Claude Cycle and can convert 700 litres of ambient air into one litre of liquid air [see Utilising the Claude Cycle].

(~ -196°C at atmospheric pressure) – is kept in insulated tanks (acting as giant thermoses) at low pressure, which function as energy stores. When power is required, liquid air is withdrawn from the tanks, pumped to high pressure, reheated and then expanded. The resulting high-pressure gas is then used to drive expansion turbine generators to generate electricity. No fuel is burnt in the process, which results in the exhaust producing clean dry air.

Operating efficiency is enhanced by adding two stores. The first is a thermal store that gathers the compression heat generated during air liquefaction and is used for increasing air temperature prior to expansion in the turbine. The second is a proprietary cold store that captures waste cold from the regasification of liquid air while power is recovered and later delivers the cold into the liquefier to reduce power consumption – these measures close the thermal loop for cryogenic energy storage [see Cold storage technology and materials].

The separation of the power, storage and recovery components provides flexibility in the system’s design. Because power and energy are independent of each other, requirements can be tailored so that clients can decide how much of a tank they want to fill, how much energy to store and then how quickly it needs to be emptied. This modularisation of the process enables different configurations and solutions to suit each customer. 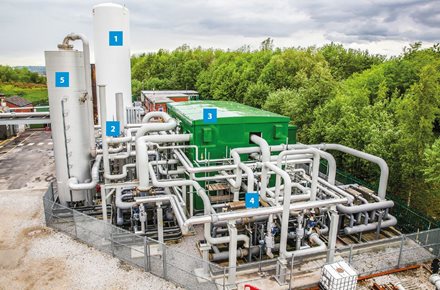 In June 2018, these elements were brought together in the cryogenic energy storage plant in Bury. The 5 MW/15 MWh storage unit was sited at Viridor’s Pilsworth Landfill Gas Generation site to convert its waste heat to power, thereby increasing the system’s efficiency (‘efficiency’ measures the percentage of electrical energy discharged compared to the amount used to charge the storage system). Cryogenic storage systems could also use industrial waste heat and cold from applications such as thermal generation plants, steel mills and liquefied natural gas (LNG) terminals to improve the standalone efficiency.

Building the demonstration plant allowed Highview Power to test the best economies of scale and figure out where economic efficiencies could be made. One of the company’s guiding principles when developing the energy storage system has been to use proven components from mature industries that are tried, tested and available. 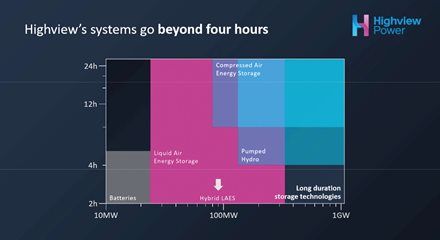 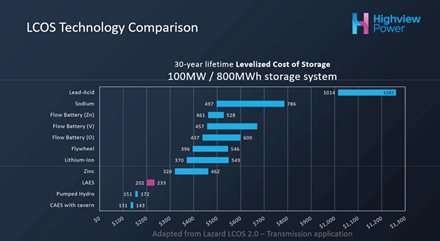 The energy storage equipment that the company incorporates is already globally used for the bulk storage of liquid nitrogen, oxygen and LNG – such as heat exchangers, packed-bed storage units and cryogenic insulation. This way it can confidently state the lifespan and efficacy of each plant’s hardware – Highview will guarantee a 30-year lifetime for its systems. The end-of-life recycling characteristics of the system are also favourable as most of the tanks and equipment are made of stainless steel with some copper in the generators; apart from lubricating oil, Highview states that the process uses nothing toxic.

The last piece of the jigsaw to be fitted before the first big sale was to improve the response times when supplying energy to the grid. For this purpose, supercapacitors and flywheels have been added to the Pilsworth plant and response times are now measured in seconds.

Highview Power sees cryogenic energy storage as being most useful in supplying the electricity grid via reserve, regulation and balancing. The idea of reserve is to keep spare capacity in the system and keep a cache of stored energy. The company can scale-up and incorporate three or four extra tanks of stored energy for this purpose. Effectively, balancing is about moving energy from one time slot to another. Regulation entails keeping the frequency constant so that the plant is matching in real time, second by second, supply with demand – stabilising frequency.

In September 2018, Dr Javier Cavada was appointed as CEO and he sees the future storage capacity of liquid air increasing from five hours to perhaps 20 hours and then a couple of days or even weeks. Liquid air can be kept for months until eventually the air in it boils off and then must be topped up with liquid air; usually, the system cycles daily and never reaches this point. He also feels that the 50 megawatt size will, thanks to the modularity of the system, increase to 100 megawatt. In five years’ time, he thinks that there will be around 20 Highview cryogenic energy storage plants around the world supplying and storing 10 gigawatt-hours of energy.

Long-duration storage has always been critical to enable the wider deployment of renewable energy and overcome the intermittent nature of solar and wind energy. It seems that cryogenic energy storage can provide that and will soon be smoothing out the peaks and troughs of renewable demand in the UK and wherever it is needed.

Dr Javier Cavada is CEO and President of Highview Power. He joined the company in 2018 after 17 years in leadership positions at Wärtsilä Corporation, including executive roles in China, Italy, the Netherlands, Spain, and Finland.

Professor Yulong Ding is Director of the Birmingham Centre for Energy Storage. In 2014, he was appointed as the Highview Power/Royal Academy of Engineering Research Chair in energy storage at the University of Birmingham. He also holds the founding Chamberlain Chair of Chemical Engineering at the university.

A new range of agricultural robots will be working in UK fields this summer to select, pick and pack ripe strawberries.