Charging into the future As one of the engineers leading the team creating Jaguar’s first all-electric car, Stephen Boulter likes to demonstrate the vehicle’s impressive acceleration. Driving the I-PACE into the Jaguar Land Rover (JLR) engineering centre at Gaydon, Warwickshire, Boulter warns to “hold tight” as he demonstrates the car’s performance. Started as a research programme in 2013, the company’s engineers set out to learn about battery electric vehicles (BEVs) and pave the way for engineering future electric models. In addition to the conventional combustion engine and a fully battery electric vehicle (BEV), most of JLR’s models are available in ‘mild’ and plug-in hybrid versions, combining batteries and internal combustion engines. JLR started the electrification of its range with the Range Rover, which was the first hybrid, followed by several other Jaguar and Land Rover vehicles including, most recently, the Jaguar E-PACE plug-in hybrid.

From 2020, all new Jaguar and Land Rover vehicles are electrified, including the new Jaguar E-PACE and F-PACE.

As vehicle engineering manager for the I-PACE, Boulter led a team that included around 400 engineers at its peak, who were drawn from many disciplines, including some not previously involved in car design. The engineers set out to create a BEV that would live up to customers’ expectations of the famous marque. Nick Rogers, Executive Director – Product Engineering at JLR, describes the task as “quite a challenge”. When designing an electric vehicle, it is not as simple as taking batteries and electric motors as alternatives to a fuel tank and an internal combustion engine and installing them in a chassis. “It is not individual pieces of technology, it is actually the integration of a series of systems,” says Rogers.

The move into electrification followed another revolution in JLR’s approach to sourcing propulsion units. Instead of buying internal combustion engines, in 2011 the company announced that it would build a new generation of diesel and petrol engines for the clean combustion era. This resulted in the Ingenium range of engines, a MacRobert Award finalist in 2016 (‘MacRobert Award 2016’, Ingenia 67). JLR invested more than £1 billion in a new Engine Manufacturing Centre near Wolverhampton, only to see the whole idea of diesel engines thrown up in the air. After encouraging motorists with tax incentives to buy fuel efficient diesel engines, the UK government quickly changed course. Diesels went from hero-to-zero almost overnight, forcing the car industry to rethink its approach.

JLR decided to accelerate its electrification plans. In future, all new models will be electrified with some combination of mild hybrid, plug-in hybrid and BEV variants, including both petrol and diesel hybrids. JLR had anticipated the need for ‘electrified engines’ when it built the new engine plant: the Engine Manufacturing Centre also houses the assembly of electric drive units.

The engineers creating the I-PACE also had to devise a fresh approach to creating new models. At first, they didn’t have the usual five-year gestation period for a new model. Rogers described the I-PACE as not just a product but “an ongoing R&D project”. The engineers didn’t know exactly what they were putting together when they started work: the team couldn’t draw on its new diesel factory for an engine; and the engineers didn’t know what the batteries would look like when they began work on a chassis to hold them. The change of gear also meant calling on different branches of engineering, including some that were relatively new to the car maker. As the MacRobert Award judges noted, battery technology, heat-pump technology, electric drive units, and the hardware and software control systems are different disciplines from those required for vehicles built around an internal combustion engine.

Battery technology was one of the key innovations in the I-PACE. Of all the systems involved, the battery sets the pattern for the rest of the vehicle. The car’s power comes from 432 lithium-ion nickel cobalt manganese ‘pouch cells’. Arranged in 36 modules, the cells can store 90 kWh of energy, enough to propel the I-PACE up to 470 kilometres (Worldwide Harmonized Light Vehicles Test Procedure).

JLR could draw on LG Chem for pouch cells, but it needed to decide how to bring them together and control their output for optimum performance and safety. JLR describes it as a ‘multi-physics’ approach: bringing together different types of expertise to create a working solution. The engineers had to develop their own simulation tools and models. Here, too, the systems approach was important. The engineers worked closely with their suppliers and internal teams to create a system that monitored and controlled each pouch cell. This is the key to delivering an optimised thermal strategy and developing the heat, ventilation and air conditioning (HVAC) system among other things.

The thermal strategy set the pattern for the development of customised heat-pump technology. Whereas internal combustion engines can provide heat to keep passengers comfortable, batteries are responsible for powering the vehicle’s heating mechanisms. It took a significant R&D effort on the part of JLR’s engineers to develop and verify the complex thermodynamic models needed to address these challenges. The work involved modelling scenarios of the vehicle operating in a range of different external temperatures. For example, batteries are famous for losing power as the temperature falls and JLR’s engineers wanted to create a car that could deliver as near as possible its rated range in very cold weather.

The answer to thermal management of the I-PACE was to develop a heat-pump system with a coolant that collects ambient and waste heat, from the vehicle’s electronics as well as the batteries and motors. This coolant is then compressed to raise its temperature and to control the temperatures of the battery and the car’s cabin. Waste heat extracted from the battery can also then be used to heat the cabin. This reduces the battery power needed for the HVAC system by a factor of three, improving the vehicle’s range. JLR’s thermal management engineers also developed controls that adapt to the number of passengers in the vehicle. 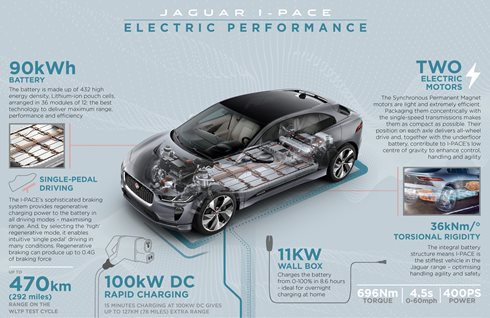 When it came to finding electric motors for the I-PACE, JLR did not have to start from scratch. It drew on its experience as a part of EVOKE, a major Innovate UK programme that ran between 2014 and 2016 to develop a plug-in hybrid vehicle. EVOKE brought together suppliers and researchers with expertise in electrical motor design to investigate concepts based on permanent magnet motors. The R&D programme did not develop a usable electric motor, but it did put JLR’s engineers on the right path and gave them the confidence to develop their own motors for the company’s first series-production BEV.

The engineers took a novel approach to the winding geometry for the magnets in the pair of electric motors that power the I-PACE. Other companies were working along similar lines, but JLR was the first to put a particular type of ‘hairpin winding’ into production, allowing a higher ‘copper fill’, which gives careful control of the magnetic flux in use. As a result, the motors have a better power density and more consistent characteristics than traditional permanent magnets. The result is a light synchronous permanent magnet motor that can be up to 97% efficient, resulting in a total system efficiency that is more than double that of the best combustion engines.

The positioning of the electric motors also adds to the car’s performance. Packaging the motors concentrically with single-speed transmissions makes them as compact as possible. The position of the motors on each axle delivers all-wheel drive. Together with the underfloor battery, the positioning of the motors contributes to the I-PACE’s low centre of gravity. This enhances the car’s control, handling and agility, essential characteristics that Jaguar drivers expect.

The fourth key innovation the MacRobert Award judges considered were the all-important software and control systems in the I-PACE. Much of this work, with 250,000 lines of code, is covered by 17 patents. JLR’s in-house software development for the powertrain supervisory control software and systems, now a team of 120 people, dates back to 2006. JLR’s decision to develop a BEV created new challenges for the software engineers, not least in squeezing every kilometre possible out of a battery charge. One development that sits firmly in BEV territory is the motor’s torque control systems for acceleration and deceleration. This can avoid the need for conventional brakes or the need to use a brake pedal, although the I-PACE does have a foundation braking system.

Torque control is commonly used in cars to control the operation of four-wheel-drive on slippery surfaces and for control when driving uphill or downhill. In an electric vehicle, torque control also plays a large part in the braking system. As the car slows down, the motors recharge the battery to such an extent that the I-PACE rarely needs to use friction braking. Regenerative braking, which can decelerate at up to 0.4 g, accounts for almost all braking events. This doesn’t just save energy; more than 90% of braking events in daily use can be achieved through regenerative braking alone, improving driver comfort and reducing particulate emissions from the braking system. The technologies that drive the Jaguar I-PACE © Jaguar Land Rover

Battery use is at the heart of any electric vehicle, with efficient and economic use of electricity as important in charging as it is in consumption. The system can schedule overnight charging when connected to an 11 kW wall box, it can achieve up to 53 kilometres (33 miles) of range per hour, while a full charge from empty takes only 8.6 hours. A quicker 15-minute top up at 100 kW DC can give an extra driving range of up to 127 kilometres (78 miles).

The I-PACE has a suite of smart range-optimising technologies. For example, when plugged in before a journey, the I-PACE can use mains electricity to raise (or lower) the temperature of the car’s battery, as well as the cabin, to maximise range. The software can even pick a route that also maximises the car’s range.

The critical nature of the control systems, and the need to ensure safety, means that all software undergoes extensive and rigorous testing to cover all anticipated faults. This complies with the highest level of current industry standards. The vehicle also incorporates a parallel software watchdog system, which independently monitors vehicle operation.

As the MacRobert Award judges saw it, JLR faced particular business challenges when setting out to build electric vehicles. Unlike startups created to design and make electric vehicles from scratch, established car makers cannot tear up existing financial models. Alternatively, they can draw on proven technologies, with no need to reinvent the wheels, but they also must resist the temptation to draw too heavily on them. The judges were impressed by the engineering team’s integration of a significant portfolio of state-of-the-art technologies into the I-PACE, with much of that technology developed in-house. Even more impressive is the overall integration of these to produce, in the UK, the world’s first premium battery electric SUV.

The engineers who judged the MacRobert Award were not alone in appreciating the combination of innovations that went into the I-PACE. The car also appealed to the judges at several motor industry events. It was the first vehicle to win three categories in the same year at the World Car Awards in 2019: World Car of the Year, World Car Design of the Year, and World Green Car.

Manufacturing and supply chains are preparing to distribute the COVID-19 vaccine after an accelerated development process.