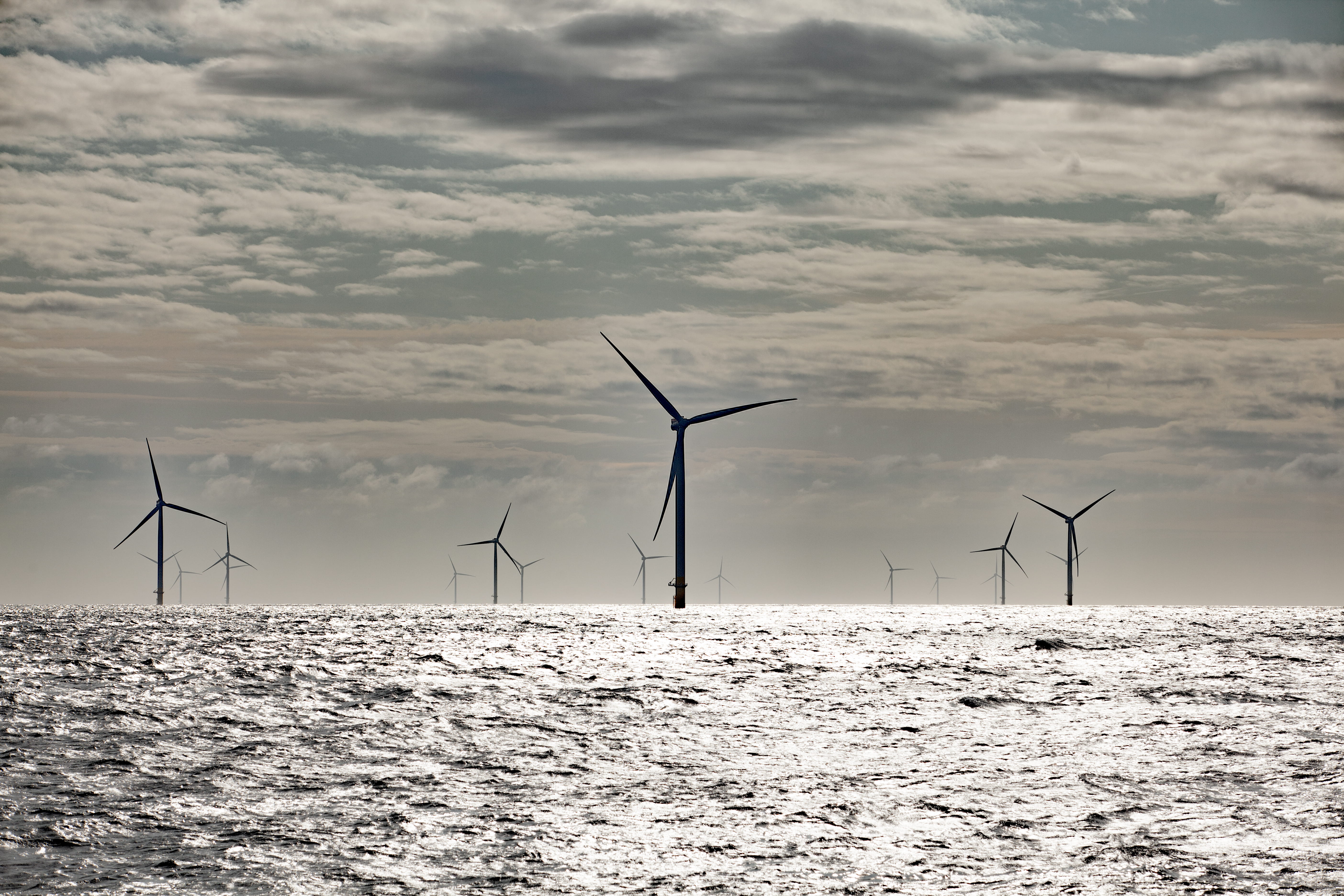 Hornsea One, the world’s largest offshore wind farm, has 174 wind turbines that generate enough electricity to supply over one million UK homes. Completed in 2019, the next phase, Hornsea Two, is under construction and is due to be completed in 2022. David Williams, Senior Export Cable Project Engineer, and Muhammad Imran Khan, Wind Farm Commissioning Project Manager, both at Ørsted, explain some of the challenges involved in creating this record-breaking offshore wind farm.

The UK government has a target of net-zero carbon emissions by 2050. Cutting emissions from energy generation could play a significant role in meeting this goal. There is already a shift away from using fossil fuels to provide energy: according to the Green Energy Trust, in 2018 33% of the UK’s electricity came from low-carbon sources and in 2019, renewable sources generated more electricity than fossil fuels for the first time since the Industrial Revolution.

Offshore wind is on track to become the UK’s biggest green energy source. The Committee on Climate Change expects that 75 GW (gigawatts) of offshore wind capacity will be needed by 2050, and in October 2020, Prime Minister Boris Johnson claimed that the UK would generate enough offshore wind power to supply every home by 2030. By 2020, 10.5 GW was installed with capacity set to rise to 27.5 GW in 2026. One gigawatt of this energy is enough to power around 600,000 homes.

A major player in green energy generation is the Hornsea One wind farm. Located 120 km (kilometres) off the Yorkshire coast, it is the first offshore wind farm to generate over 1.2 GW of clean electricity, almost double the world’s previous largest windfarm.

Built by Danish renewable energy company Ørsted, the UK government approved the wind farm in 2014. At the time, Ørsted’s largest offshore wind farm was the London Array, about 20 km from the Kent and Essex coasts in waters up to 25 m deep, which generates 619 MW of energy to power around 500,000 homes. Hornsea One was much more ambitious. 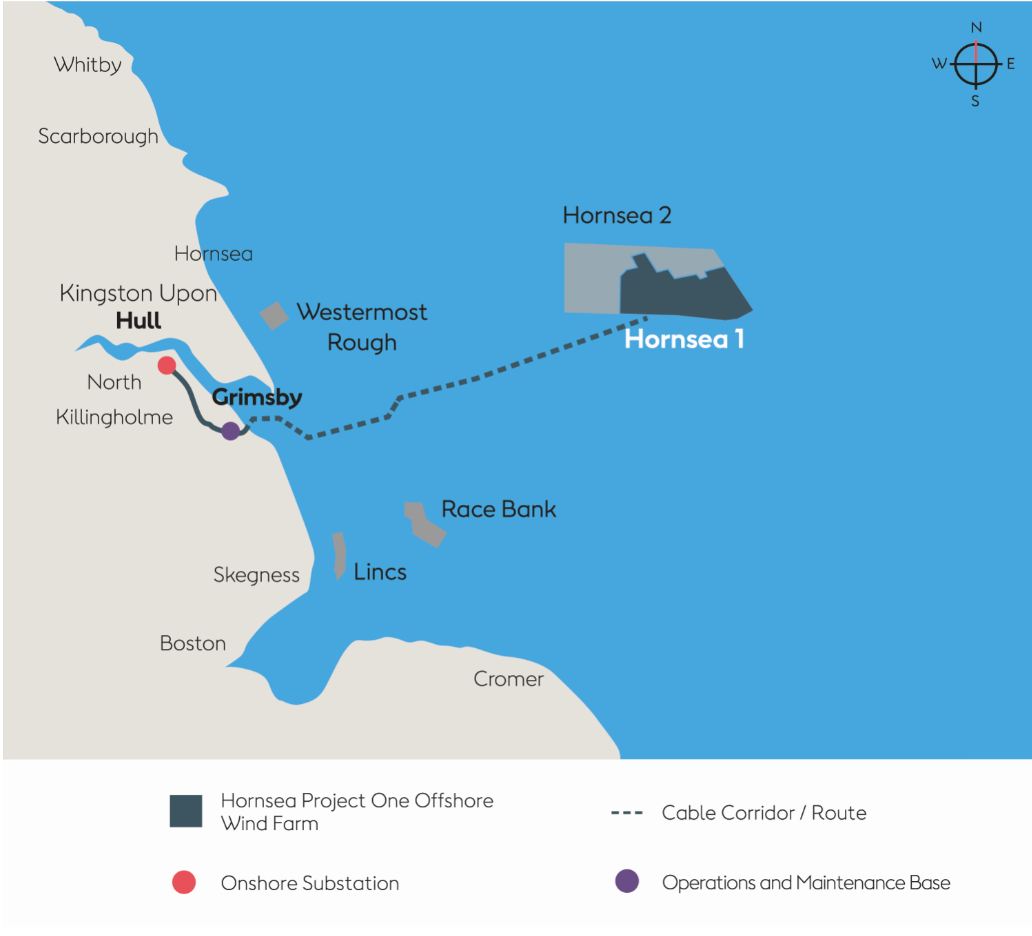 The Hornsea wind farms are located some 120 kilometres off the UK’s east coast, close to Hull © Ørsted

Choosing the perfect location for a giant offshore wind farm was the first challenge that Ørsted’s engineers faced. The Crown Estate owns the seabed where offshore wind farms are located. Wind farm developers must consider parameters such as water depth, cable landfall options and onshore grid facilities, as well as environmental factors such as designated conservation sites, where the local environment is protected.

Hornsea One is situated just off the UK’s east coast, where the seabed is shallow but stable and wind speeds are consistently high. To choose an ideal location, the team conducted meteorological assessments across potential spots to measure wind speed and weather, ensuring that the site did not interfere with marine conservation areas. Hornsea One is further from the shore than any other wind farm and covers just over 400 square kilometres, which is three times the size of Manchester.

Because of the site’s size and distance from the shore, the crew – including around 100 people who were involved in site management – lived on an offshore platform during construction.
The distance also meant that detailed plans to move the huge and heavy components to the site had to be drawn up. A total of 522 blades, each measuring 75 metres long, were transported from the Siemens Gamesa Renewable Energy blade factory in Hull, Yorkshire. The carefully manufactured balsa wood and fiberglass blades were lifted on to a jack-up barge, a vessel on legs that sails as a normal ship until it is needed for construction. The barge was also loaded with the rest of the turbines’ components before setting sail to the site location. Once at the site, the jack-up barge’s ‘legs’ were lowered and stabilised on the seabed to secure it so that the components could be moved around safely.

Each of Hornsea One’s 7 MW wind turbines towers 190 metres above sea level, with a blade diameter of 154 metres. A single rotation of the turbine’s huge 75-metre-long blades generates enough energy to power a home for over a day. The rotation of blades turns an internal shaft connected to a gearbox or directly to the generator depending on the design of the wind turbine. The spinning of the generator produces electricity, which is exported to the grid via subsea cables, and then on to homes. 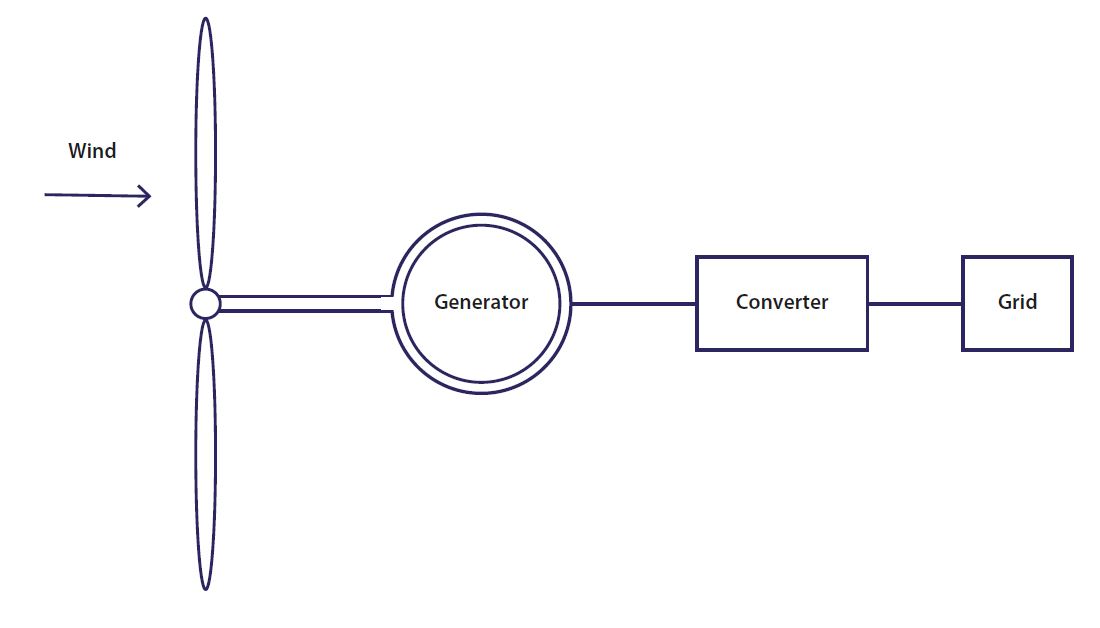 The wind speed on the east coast of the UK is among the fastest in the world, and depends on atmospheric pressure, geography and season. The optimal wind speed for Hornsea One’s turbines is around 14 metres per second (mps), considered a strong breeze on the Beaufort scale, the kind of wind that would make it difficult to use an umbrella. Ultrasonic sensors on the turbines constantly measure wind speed and direction while automatically rotating the blades to capture as much energy as possible. To prevent structural damage to the turbines, a control system automatically switches off the turbines when the wind speed exceeds 24 mps (a severe gale). The turbine blades also angle themselves 90 degrees towards the wind during periods of extreme weather to reduce the likelihood of damage.

The Hornsea One turbines use a direct drive, which means they do not have a gearbox and the rotor is connected directly to the generator. With fewer moving parts than gearbox turbines, they are quieter and have lower maintenance costs for the wind farm as the teeth and cogs in a heavy gearbox wear out in variable wind speeds. After installation, turbines require regular maintenance. Around 40 wind turbine technicians look after the wind farm and run annual checks on each turbine as well as conducting ad-hoc repairs and maintenance. 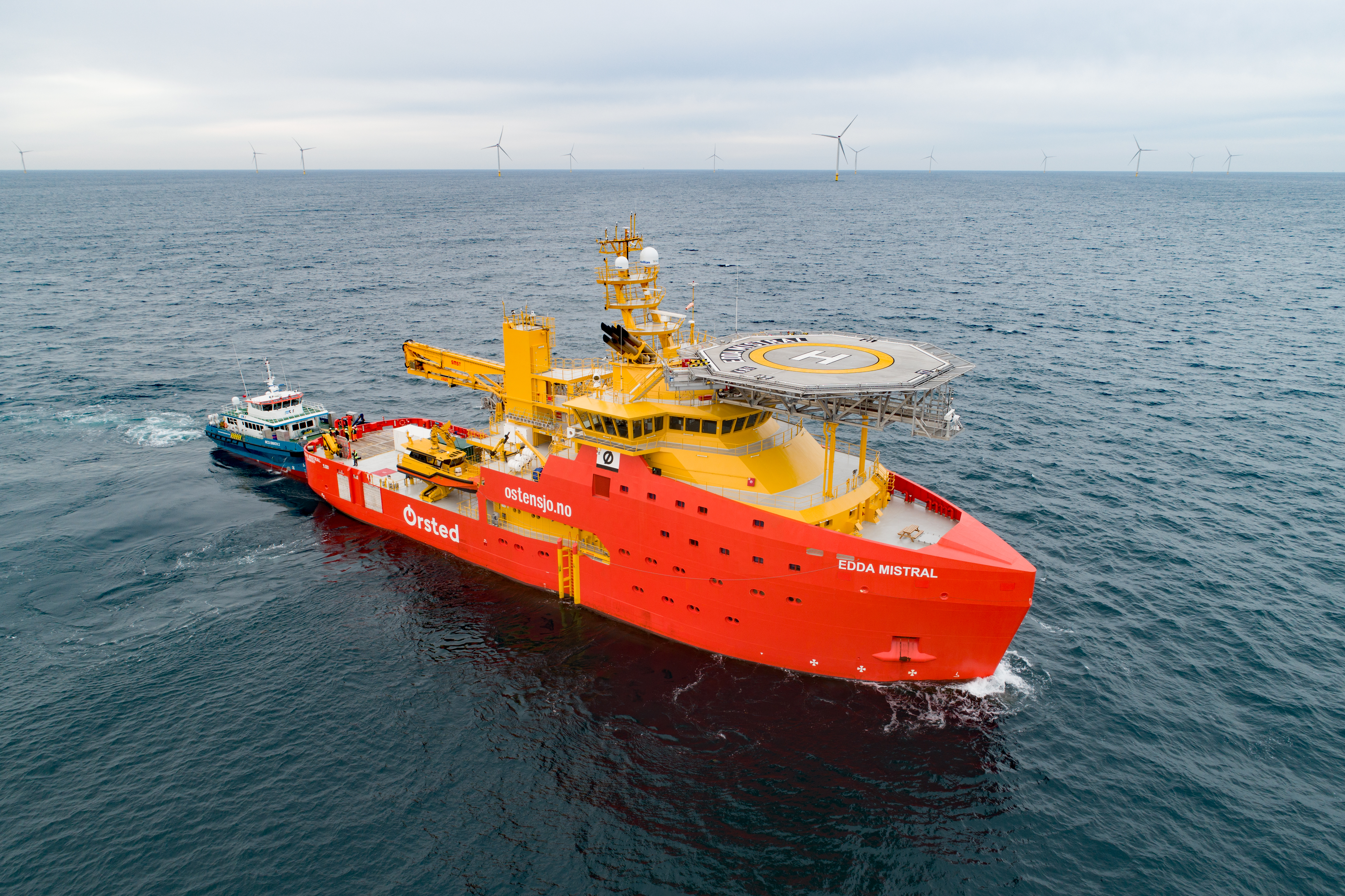 The Edda Mistral, the service operations vessel that the crew live on. During the construction process, 8,000 people worked offshore on the project © Ørsted

Much like the shift pattern on offshore oil rigs, for two weeks at a time, technicians live onboard a service operations vessel. Built to cruise liner standards, technicians have a comfortable stay offshore. An innovative motion-compensated gangway allows technicians to walk to work to the bright yellow transition piece platform, fixed on top of the monopile in the seabed, creating the foundation. Technicians work alongside a support network based in Grimsby’s East Coast Hub, the world’s largest operations and maintenance facility for offshore wind, which had a recent £10 million investment and upgrade. The offshore co-ordination centre is staffed 24/7 to give an extra layer of safety for those working offshore. By constantly reviewing the weather and assessing the likelihood of lightning, the offshore co-ordination staff can also manually control turbines. 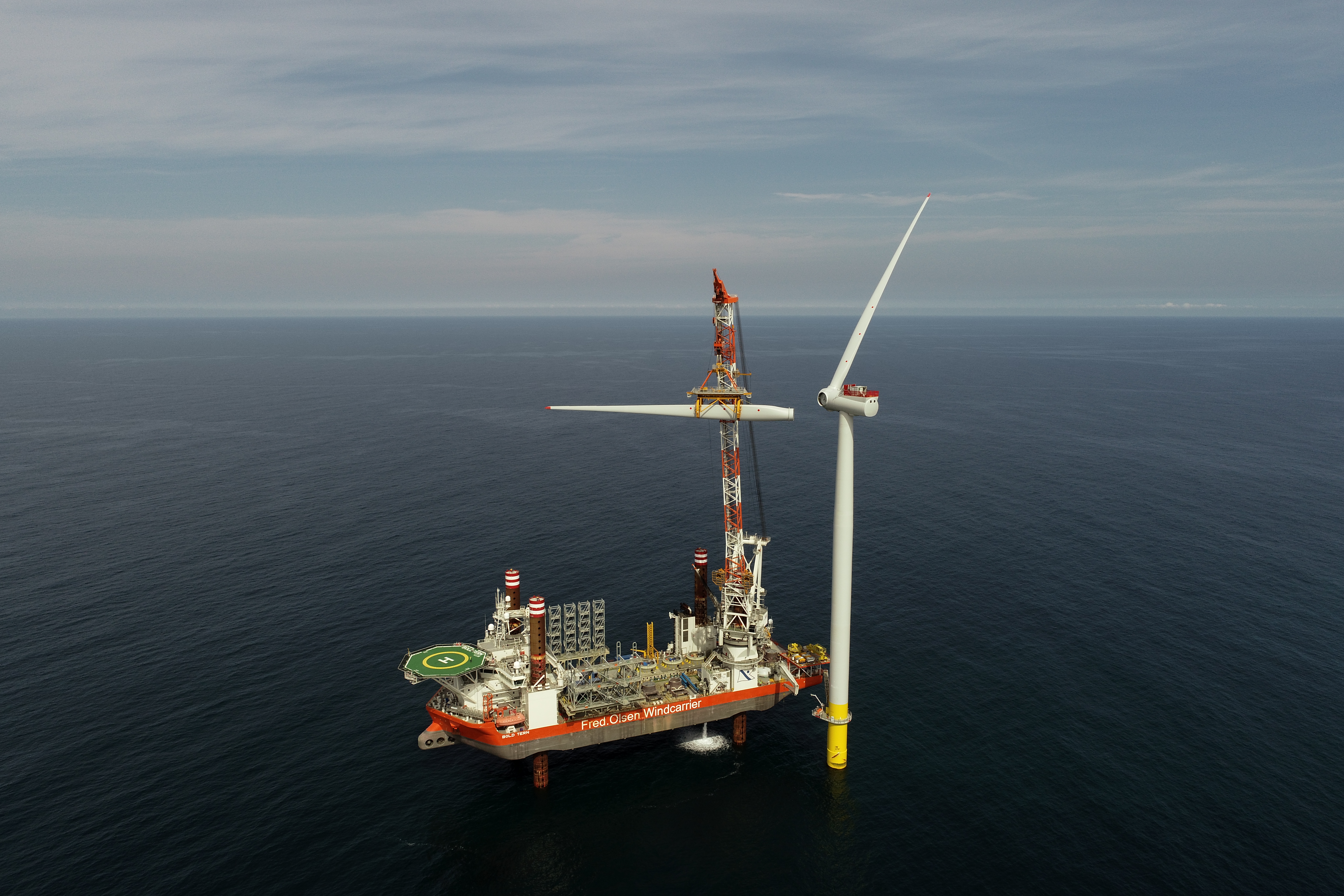 Bringing the power ashore is one of the biggest engineering challenges, and for this project it meant developing new approaches. On Hornsea One, engineers achieved a longest manufacturing run of 200 km of cable, doubling the previous maximum AC cable length. They would usually allocate 10% spare cable to cover contingencies and repairs. This meant that a larger storage space was needed and allowances were made for additional manufacturing time.

Array cables connect each turbine to the next one, buried beneath the seabed until they reach an offshore substation. Three offshore substations are positioned near each other at sea. The power from each wind turbine is stepped up from 690 V to 34 kV and then transmitted via a series of ‘strings’ (cables). There are 36 strings in total, split across all three offshore stations. Each string connects four or five wind turbines. As the power reaches the offshore station from the turbine, it is stepped up again from 34 kV to 220 kV and is then transmitted via the export cables to the reactive compensation system (RCS), a point midway between land and the offshore stations (see image on next page). At the RCS the voltage remains at 220 kV and is transmitted back to the onshore substation by three export cables.

As they are out of sight, cables are often an unappreciated necessity that have taken months to manufacture and test. However, they are one of the most important components. Essentially the project’s veins, they carry electricity from source to consumers. The time it takes to manufacture the cables is astounding; production for Hornsea One took over a year and was across two factories. 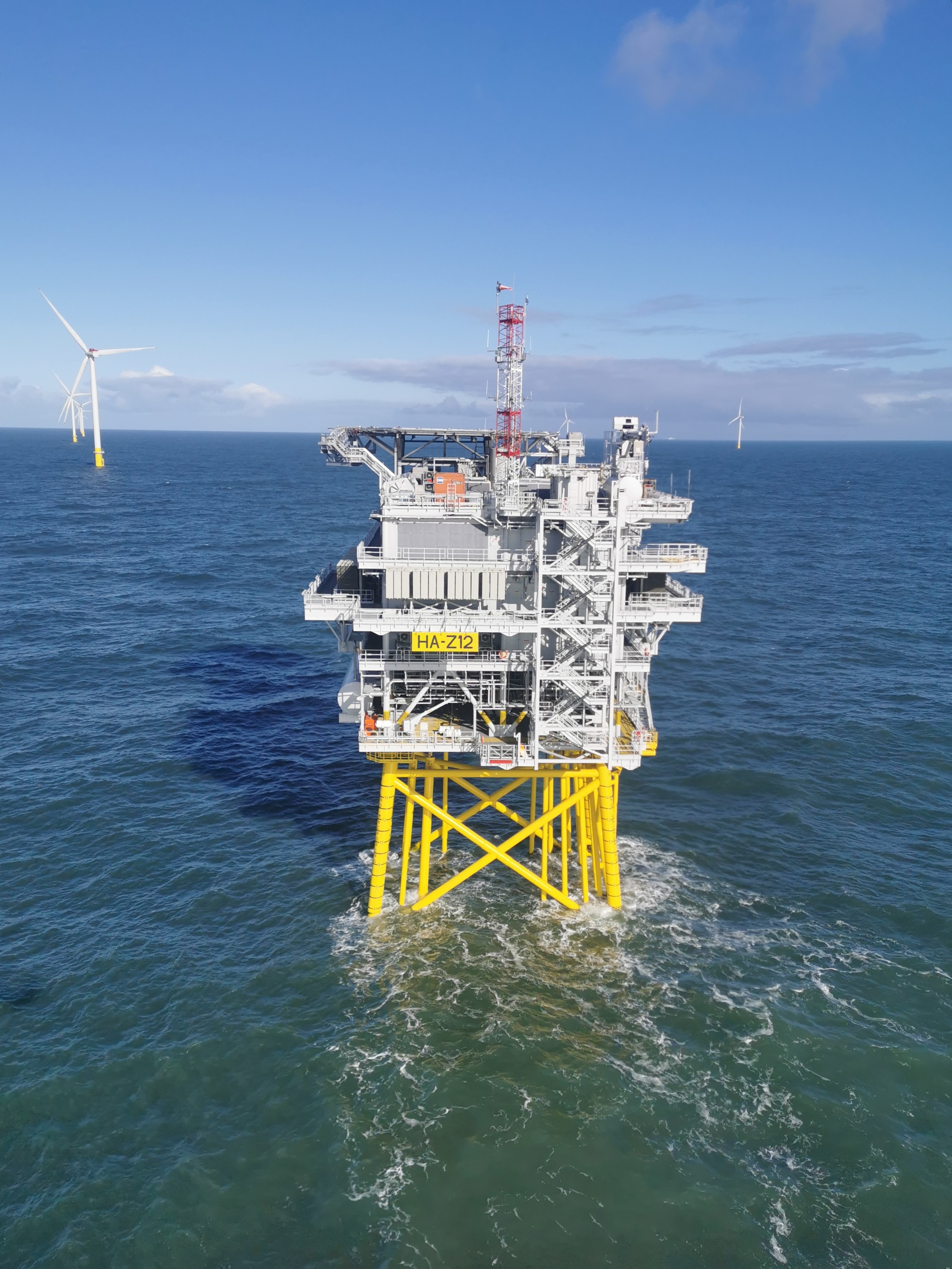 In a first for offshore wind, a reactive compensation station (RCS), weighing a total of 4,000 tonnes, was installed halfway between the landfall site at Horseshoe Point in Lincolnshire and the three offshore substations to act as a midway point. It removes the reactive power (the difference between the electricity supplied and the electricity converted into useful power) and sends the active power (useable energy) through cables that connect to the onshore substation. The station is installed on the seabed but sits on legs above sea level © Ørsted

Hornsea One began supplying power to the National Grid in February 2019, with the project completed in early 2020. This year, turbine installation will begin on Hornsea Two, which is next to its predecessor and 89 km from the coast.

The project will use the world’s largest offshore substation and will deliver the most affordable electricity from offshore wind to date. “Large infrastructure projects like these have their challenges, but with each project we have built we are able to improve efficiencies,” says Duncan Clark, Project Director.

The wind farm still requires the energy-boosting RCS. However, where Hornsea One has three offshore substations, Hornsea Two will have one. This gigantic structure for Hornsea Two will be floated across from Indonesia using a semi-submersible crane vessel that will lift the substation into position.

The UK government incentivises investment in renewable energy with the Contracts for Difference (CfD) scheme, providing developers of projects with high upfront costs and protecting consumers from paying increased support costs when electricity prices are high. With a CfD strike price of £57.50, it means that green energy is now officially cheaper than gas, coal and nuclear.

When Hornsea Two becomes operational in 2022, the two projects will together generate electricity for almost 2.5 million homes, bolstering Ørsted’s vision of creating a world that runs entirely on green energy. The cost of offshore wind power has continued to come down and today offshore wind energy is cheaper than new generation capacity based on fossil fuels. The Hornsea One and Two projects mark an important step towards achieving the UK’s net-zero aims.

Biographies
David Williams, Senior Export Cable Project Engineer at Ørsted, is a chartered engineer and studied at Cardiff University and the University of Loughborough. He worked on the Hornsea One project for over six years, including on the initial technical design concept and engineering technical support for supply and installation of export cables.
Muhammad Imran Khan, Wind Farm Commissioning Project Manager at Ørsted, studied electrical and electronic engineering at the University of Manchester. Imran works on the Hornsea Two project and has done for 13 months. His remit on includes coordinating stage one commissioning and responsibility for stage two commissioning of the whole windfarm.

All hands to the pumps

The UK’s engineering industry collaborated to rapidly create over 13,000 ventilators for the NHS in just 12 weeks.

Lessons from the field

Engineers discuss the impact that working in other countries has had on their career paths and outlooks.

UK households produce over 25 million tonnes of waste a year and only around 45% of UK waste is recycled. The waste that can’t be recycled or reused goes to landfill, where it is starting to contribute to the circular economy.

How I got here - Felicity Milton

Felicity Milton, mechanical engineer and Senior Manager, Strategy and Innovation at adidas, talks about the future of trainers.