In June, the Royal Academy of Engineering hosted its annual Awards Dinner, which celebrated and recognised a number of engineers who have made a remarkable contribution over the course of their careers.

Roma Agrawal, winner of the Royal Academy of Engineering’s Rooke Award, in front of The Shard, London. She spent six years working on the building as senior structural engineer © WSP

Roma Agrawal, a structural engineer and Associate Director at AECOM, received the Rooke Award for her outstanding contribution to the public promotion of engineering through her talks and television appearances. Over the last six years, she has spoken to over 10,000 people at hundreds of events in the UK and abroad and has appeared in magazines such as Stylist, Cosmopolitan and Glamour, which do not commonly feature engineers. Roma has also written articles for the Guardian and the Daily Telegraph, and appeared on documentaries for the BBC, Channel 4 and Channel 5. Her first book, BUILT: The hidden stories behind our structures, will be published in February 2018.

The Major Project Award was presented to a team from Arup for its work on Glasgow’s SSE Hydro Arena, which is Scotland’s largest entertainment venue. The Arup team had to overcome significant challenges to create the building situated on the bank of the River Clyde, such as difficult ground conditions, with the biggest being the design and installation of a 125-metre clear span, tilted roof.

The President’s Medal was awarded to Ian Shott CBE FREng in recognition of his many contributions to the Academy’s work. This includes his role as founding Chair of the Academy’s Enterprise Committee, which culminated in the successful establishment of the Enterprise Hub – an incubator that provides funding, business support and mentoring to engineering and technology startups.

Five young engineers received the RAEng Engineers Trust Young Engineers of the Year awards: Dr Ruth Misener, a lecturer in computational optimisation at Imperial College London; Frank O’Leary, a geotechnical engineer at Arup; Anna Polszajski, an engineering doctorate candidate at UCL; Chris Shaw, lead engineer at game developer Sensible Object; and Dr Jenni Sidey, a lecturer in combustion at the University of Cambridge. Dr Ruth Misener was the winner of the Sir George Macfarlane Medal for her work in developing innovative approaches to process systems’ engineering challenges using the latest computer science techniques. The medal is awarded to engineers who have demonstrated excellence in the early stage of their careers.

The winner of the MacRobert Award, Raspberry Pi, and the five Silver Medallists were also announced.

REPORT CALLS FOR ACTION ON INCLUSION

The Royal Academy of Engineering has released the results of a unique study of diversity and inclusion across the engineering profession, based on survey responses from 7,000 UK engineers.

The aims of the survey, which was undertaken in January 2017, were to increase understanding of the culture of engineering, the extent to which it is inclusive, and what would make it more so.

The survey found that there is a strong business case for inclusion within the profession. Respondents to the survey who felt included reported increased motivation (80%), performance (65%) and commitment to their organisation (52%). The responses showed that the more included engineers feel in an organisation, the more likely they are to understand business priorities, see a future for themselves in the profession, and feel more confident to speak up about improvements, mistakes or safety concerns. These benefits were not only reported by women and ethnic minority engineers, but also by white male engineers, who make up the majority of the profession.

To make progress, the report highlights the need for action from engineering leaders, managers, human resources and communications staff, as well as individual engineers, in areas such as: prioritising inclusion; better articulating the benefits of inclusion; increasing awareness of how different groups perceive workplace culture; and monitoring data on the delivery of career support and talent management.

To read the full report based on the survey responses, please go to www.raeng.org.uk/engdiversity

SECRETS OF HISTORY AT INGENIA LIVE!

In September, the latest Ingenia live! event will explore how engineering techniques have helped to reveal the secrets of history. 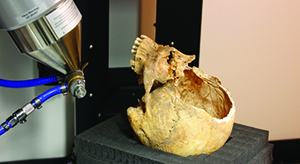 As former Professor of Materials and Forensic Engineering at the University of Leicester and a specialist in her field, Professor Hainsworth will discuss how forensic engineering science helped to discover how Richard III died on the battlefield, after his remains were found under a Leicester car park in 2012 (‘Solving a historical mystery’, Ingenia 71). Professor Mark Williams, Project Evaluation Technologies Group Leader and Principal Investigator, Warwick Manufacturing Group, University of Warwick, will explain how his team’s technologies and expertise have helped solve serious crimes (‘Digital forensics’, Ingenia 66), and even found new teeth in a dinosaur fossil that is more than 200 years old. David Mearns is a marine scientist and oceanographer, and will talk about work he has done with Professor Williams using cutting-edge manufacturing to identify a rare silver coin that was found in a shipwreck off the coast of Oman.

The event will be chaired Dr Scott Steedman CBE FREng, Editor-in-Chief of Ingenia and will be followed by a Q&A session and a networking reception.

Ingenia live! brings to life the stories featured within the magazine, covering a whole range of engineering disciplines and providing an opportunity for live interaction. 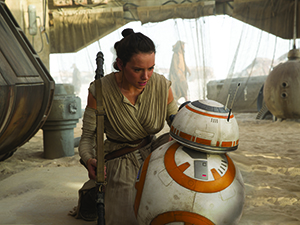 Between 28 September and 1 October, the second New Scientist Live will take place at ExCel London. A celebration of science, technology and engineering, the event will have interactive demonstrations, exhibitions and speakers across five zones: engineering, cosmos, earth, humans and technology.

For more information and to book tickets, please visit www.newscientistlive.com

In early 2018, the first experiment to test technologies to remove space debris in low Earth orbit is expected to launch.

The RemoveDebris mission has been developed by a consortium of institutions led by the Surrey Space Centre at the University of Surrey and is a €15.2 million project partially funded by the European Union. The mission will employ both a net and a harpoon system, neither of which have been tested in space before, to capture space junk – fragments of damaged satellites or rockets in orbit that can then collide with other spacecraft and cause further wreckage.

October 2017 will be the 60th anniversary of the launch of Sputnik, the first ever satellite. In the six decades that humans have been exploring space since, it has become increasingly full of clutter, and experts are now worried that the orbital environment is becoming unstable. According to Holger Krag, head of the Space Debris Office at the European Space Agency (ESA), there are roughly 5,000 objects larger than one metre, 20,000 objects larger than 10 centimetres, 750,000 objects around one centimetre and around 150 million objects around one millimetre that are currently in low Earth orbit. Out of all of these objects, only 1,200 are operational satellites. The rest are defunct craft, used rocket stages and, mostly, fragments created in collisions. The US Space Surveillance Network currently tracks about 18,000 objects larger than 10 centimetres and issues conjunction warnings to spacecraft operators in case their satellites are on a collision course with pieces of debris. 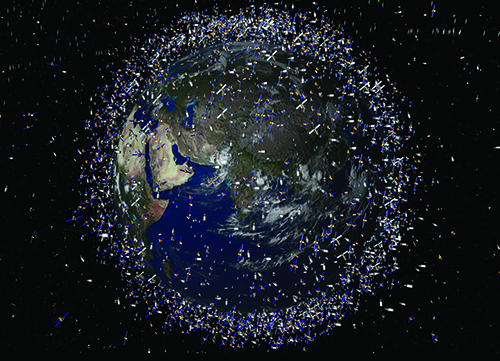 An artist’s impression of the amount of space debris in low Earth orbit, viewed over the equator © ESA

At the Seventh European Space Debris Conference in April 2017, American astrophysicist Donald Kessler said that 10% of all satellites in low Earth orbit experience small collisions with space debris, causing immense financial risks to the operators. It was Kessler who first predicted in 1978 that a situation would occur where collisions between fragments and satellites would become unstoppable. The phenomenon now bears the American’s name – the Kessler Syndrome. According to Krag, the first indications of Kessler Syndrome are already occurring. However, modern civilisation is increasingly reliant on space assets. The world needs satellites for a number of activities, from navigation to weather forecasting and telecommunications.

International guidelines currently recommend that operators should remove satellites from low Earth orbit – the altitude up to 2,000 kilometres – within 25 years after a mission has ended. Only 60% of operators currently meet the requirement as it involves a complex manoeuvre that takes place when the satellite already has a long mission behind it.

Now, spacecraft engineers are developing technologies that could help with the orbital clean-up, such as dedicated deorbiting thrusters that could steer satellites into the atmosphere to burn up within weeks, or sails that are deployed at the end of the mission and increase atmospheric drag to speed up the deorbiting process.

For the purpose of the RemoveDebris experiment, the debris collector craft will carry its own pieces of debris – CubeSats (mini satellites that are the size of a shoebox) – to release and catch. This is because the current legal framework does not allow people to remove debris that belongs to someone else. Even if no longer functional, the broken spacecraft still belongs to its original owner and no one is legally allowed to move it.

The RemoveDebris spacecraft, weighing about 100 kilograms, will be the largest item to have ever been pushed to space directly from the International Space Station. Once freely in orbit, the catcher spacecraft will release the first of its targets. Springs will push the CubeSat out of the spacecraft’s door into orbit and, at a set time, the net will then recapture the mini satellite. Although this sounds simple and has been extensively tested on Earth, it has never been demonstrated in space, which is a much harsher environment.

In future missions, the net will be connected to the catcher craft by a tether so that debris could subsequently be dragged down into the atmosphere using its thrusters. However, for the purpose of the demonstration, the RemoveDebris team decided to leave the tether out to avoid the risk of problems such as the CubeSat bouncing back and hitting the mission’s main satellite.

A second CubeSat will be used to test a vision-based navigation system that would allow two spacecraft to safely meet in space. The system, consisting of a LIDAR (light detection and ranging – a remote sensing method that uses light in the form of a pulsed laser to measure variable distances to the Earth) and an optical camera, would track the CubeSat as it drifts away from the main craft. Data will be collected via a satellite link to determine whether the system is working correctly.

Eventually, the main craft will deploy a boom with a fixed plate, into which it will subsequently fire the harpoon. In future missions, the aim is for the harpoon to be fired into a piece of space debris, but the technology is still being developed. A large sail will then be employed to speed up the deorbiting process, so that instead of the recommended 25 years, the debris would burn up in the atmosphere within a year or two.

The RemoveDebris mission will help engineers learn valuable lessons and advance the technology before they move towards larger and more expensive missions.

ESA hopes to use the lessons learned from RemoveDebris in the eDeorbit mission, an ambitious project to remove a defunct 8-tonne satellite from low Earth orbit in the mid-2020s. Its engineers currently envision that the eDeorbit craft could use a net or a robotic arm to capture the observation satellite Envisat, which stopped responding to ground controllers in April 2012. The satellite is currently at an altitude of 700 kilometres above the Earth’s surface and is estimated to take 200 years to deorbit. During that period, between 15% and 20% of the satellite could collide with other debris – or higher if more satellites are launched.

To find out more about the RemoveDebris mission and follow its progress, please visit www.surrey.ac.uk/ssc/research/space_vehicle_control/removedebris

Music for the masses

Abbey Road Studios is using its engineering expertise to allow musicians recreate its classic sound wherever they want to record.