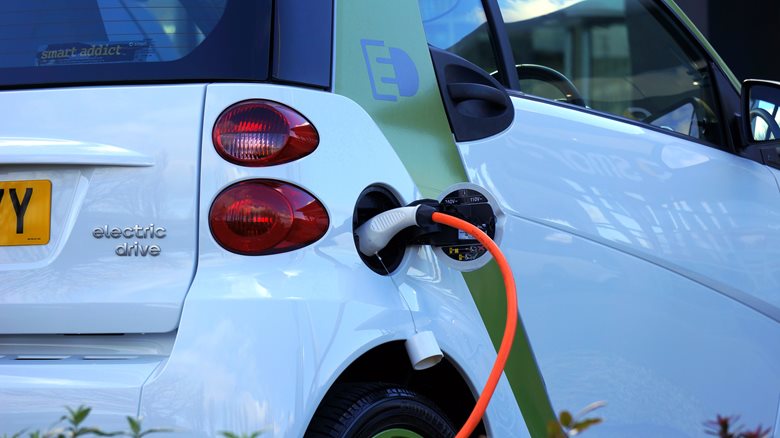 Mass adoption of electric vehicles is key to reaching the UK government’s goal of net zero greenhouse gas emissions by 2050. As they rely on batteries for power, engineers are continuously exploring battery development to increase efficiency © MikesPhotos/Pixabay

With governments and businesses committing to net zero and eliminating emissions of carbon dioxide, the pressure is on to replace fossil fuels. Electrification of transport, the largest source of CO2, is a key part of the UK’s approach to this. Batteries will be important in supporting intermittent renewable power sources and providing portable energy. Professor David Greenwood from WMG at the University of Warwick discusses the UK’s Faraday Battery Challenge, which supports R&D at all stages of the electrification of transport, from new battery technologies through to disposal and recycling.

Demand for action on climate change has prompted the government to declare a climate emergency and to pledge that the UK will eliminate the country’s greenhouse gas emissions by 2050 – an ambition that poses an array of engineering challenges.

With transport making up around 20% of the world’s energy consumption, electric vehicles will be essential to achieving net zero. Transport is the largest sector for greenhouse gas emissions in the UK, with road transport accounting for more than 90% of the domestic emissions. In 2018, electric vehicles were just 1.1% of the 2.37 million new cars sold in the UK; 6.2% including petrol–electric hybrids. However, in 2019 sales jumped by 60% with nearly 12,000 sold in the first half of the year and more than 64,000 hybrids and plug-in hybrids sold in the same period. Manufacturing these vehicles requires innovation and engineers are continuously developing new approaches to improve batteries’ performance, characterisation and use. 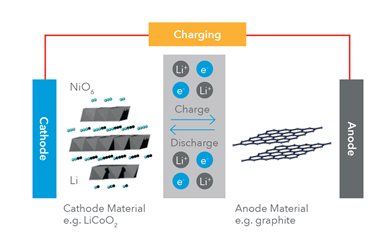 The anode, cathode, separator, external circuit, and flow of Li-ions and electrons in a typical Li-ion battery © WMG

In an electric vehicle, the battery is far more than an energy reservoir. Its array of sensors and electronic systems define almost everything we care about in a car and the 600-kilogram mass of cells underneath the seats is at the heart of the vehicle’s design. Battery assembly accounts for half of the cost of building a car, and its capacity governs the driving range. Pressure is on to reduce the cost, and weight, of batteries and to increase their storage capacity.

Most current electric vehicles use a range of hundreds of individually instrumented lithium-ion (Li-ion) cells, the batteries with the highest energy density in commercial use (see ’Lithium-ion batteries: a brief introduction’). These have cathodes that contain cobalt, an expensive raw material, some of which comes from unethical sources. Some suppliers, including Panasonic, the world’s largest battery maker, have set themselves the goal of removing cobalt from their products.

Engineers are researching various alternative battery technologies. One approach is to use so-called solid-state batteries, with solid lithium metal electrodes and solid electrolytes, rather than the flammable organic liquid electrolytes in Li-ion batteries. Mainly used in medical technologies, commercial solid-state batteries could increase a car’s driving range, reduce weight and address safety concerns such as flammability and leakage. However, solid-state batteries can fail after repeated charging and discharging at the high current density needed for many consumer applications, preventing their wider adoption. 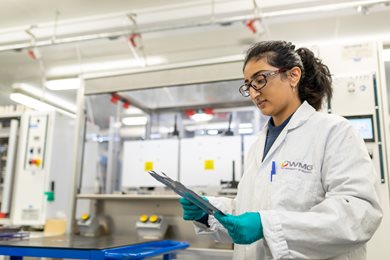 This failure has been explored by the SOLBALT project at the University of Oxford, which is supported by the Faraday Institution. It has discovered that voids can form and accumulate during charging when current density removes lithium from the interface between the lithium metal and the ceramic electrolyte faster than it can be replenished during discharge. This increases the local current density, leading to dendrite formation (fingers of molten metal that form during battery charging) and battery failure. To prevent dendrite formation, cells need to be charged and discharged below the critical current density at which voids start to form.

As well as these newer technologies, researchers are investigating new uses for older battery technologies. Sodium-ion batteries were developed at the same time as Li-ion batteries and work in the same way, with sodium compounds instead of lithium compounds. However, sodium ions are larger than lithium ions, so the batteries have naturally lower energy density, which limits commercial interest.

Lithium-sulphur (Li-S) batteries are also becoming attractive. The theoretical energy density of a Li-S cell is 2,510 Wh/kg, far higher than the 600 Wh/kg or so for Li-ion batteries. Alongside the energy advantages of Li-S cells, sulphur is easy to source and is non-toxic, making it an environmentally friendly alternative to Li-ion cathodes. However, these advantages also present challenges. Li-S cells have a relatively short cycle life. This is in part because the lithium anode reacts with organic solvents, which, over time, can cause a decline in charging efficiency and a reduction in discharge capacity. Much of the research on Li-S batteries has focused on protecting the anode, which would improve their cycle life significantly.

Li-S has a lower volumetric energy storage density than Li-ion, so Li-S cells will be lighter, but they are also likely to be larger. While this might rule them out for some commercial uses such as cars, they may be more suitable for high altitude and long-range aerospace applications. UK-based Oxis Energy has worked with Bye Aerospace on electrifying piston and turboprop aircraft for regional flight transportation. The company has also investigated possible marine applications. The company, which develops Li-S batteries for a range of industries, is working with the National Oceanography Centre to develop a Li-S battery that can power autonomous marine vehicles at depths of more than 6,000 metres. Through the Revolutionary Electric Vehicle Battery project, funded by InnovateUK, Oxis also worked with Imperial College London, Cranfield University and engineering company Ricardo to develop a 400 Wh/kg cell for a battery electric vehicle, with plans to produce a 500 Wh/kg cell later this year and ambitions to reach 600 Wh/kg. 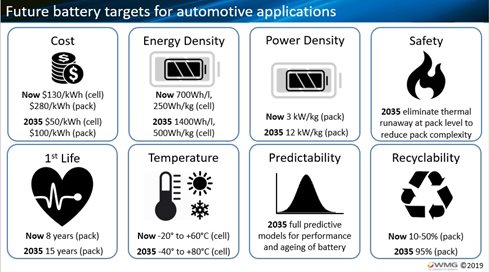 The variety of battery technologies available and in development suggests that the future of electric vehicles doesn’t stop with cars. There is the potential to reengineer aircraft, commercial vehicles and public transport, and to develop batteries to meet each vehicle’s needs.

Formula E car racing has been a high-profile success story for battery development. Williams Advanced Engineering, a part of the Formula 1 car company, developed the first battery packs for Formula E. When first launched in 2013, Formula E cars could not complete a race, meaning that drivers had to switch cars mid-event to go the distance. Battery technology progress means that cars can now complete the race. The latest Formula E batteries, developed by Atieva, a part of Lucid Motors, have cells specifically chosen for their race performance, built in a unique trapezium design to fit maximum power inside the car. They contain software that allows the battery pack to perform for the duration of the racing season with no significant degradation.

The emphasis on performance and improved power in racing cars has also helped innovation in aerospace, where the goal is to develop all-electric fixed-wing commercial flights. Rolls-Royce’s research programme Accelerating the Electrification of Flight aims to develop the fastest all-electric plane in history to break the current 466 kph world record. The single-seater plane, powered by what Rolls-Royce dubs the “the world’s most energy-dense flying battery pack”, would have enough energy to fly from London to Paris. Taking inspiration from the successes of Formula E batteries in reducing weight, the team used lightweight materials to cut the plane’s packaging-to-battery cell weight ratio in half when compared to an electric car, as well as building in a bespoke liquid cooling system to regulate the heat of the battery cells. The aircraft has three 72 kWh batteries, combining 18,000 Li-ion battery cells, packaged for maximum lightness.

Maximising energy density and minimising weight are essential to high performance road and passenger aerospace vehicles, but in other fields batteries need different qualities that can bring added benefits. For example, when JCB began designing an all-electric mini-excavator it became clear that the vehicle would be ideal for work indoors, in tunnels or even underground, as there would be no need to extract toxic combustion fumes. It produces just a fifth of the noise of a traditional diesel engine model, an advantage for work in busy cities.

Electrifying transport in pursuit of net zero requires more than just finding more efficient and economical ways to store electricity. Engineers also need to find ways to make electric vehicles fit into our lives. While new technologies and applications are important, existing technology needs improvements, such as quicker charging. The ability to fast-charge car batteries is essential in reducing the fear that a car’s batteries will run flat in the middle of a journey. However, current fast-charging technology can produce triple the heat energy of slower charging. Li-ion batteries operate best inside a relatively narrow temperature range, roughly 15°C to 35°C: too cold and they charge too slowly, while excessive heat can degrade performance and can accelerate battery ageing. Good thermal management is the key to better battery performance, more range on a single charge and a longer cell life.

In another programme funded as a part of the Faraday Challenge, research is under way to cool batteries in use. The I-Co Bat research programme is developing a battery pack concept that uses a biodegradable cooling fluid, MIVOLT, to immersion-cool the battery. MIVOLT is developed from dielectric fluids currently used to cool and insulate transformers in wind turbines and high-speed trains. The batteries are immersed in coolant to reduce heat, improve charging time, and lengthen battery life. A research collaboration between WMG at the University of Warwick, Manchester-based M&I Materials, which has more than 40 years’ experience in manufacturing products for electrical insulation, and electric vehicle battery pack and management specialists at Ricardo, is aiming to validate and commercialise this new form of battery cooling.

Whether developing sustainable battery technologies, finding new uses for established battery types, improving the performance of existing batteries or giving new life to old batteries, UK engineers are transforming the way we power our world. In the near future, batteries will power planes, ships, construction vehicles, homes and cars, helping deliver a zero-carbon economy and a cleaner world.

Responding to a global pandemic

The impact of COVID-19 has been felt around the world. Engineers and engineering businesses across the UK have responded quickly to help address the challenges it has caused.

HOW DOES THAT WORK - Induction hobs

Energy generated by the ocean is not used widely, but projects using wave and tidal energy are aiming to make it a preferred source of renewable power.

Clever mechanical engineering has been employed to flood the stage in a production of classic musical Singin’ in the Rain, allowing performers to dance, jump and splash about on stage.